Since Marsh and I have been married we haven't had the best luck with electronics.  We bought our first tv right after we got married.  We paid a little more and got a Sony, thinking it was a great brand and would last.  We'd only had it just over a year when it started getting a mind of it's own.  It turned off whenever it wanted to making our viewing pleasure not so great.  Marsh would joke that it would turn off when we'd watched too much tv.  He was joking about this when it would do it every 10 seconds.  We finally tried to get it fixed and ended up having it in the shop for 6+ months.  The first month the tv was in the shop, it was in the dead of winter.  I was at home, with Chandler who was about 15 months at the time and no car.  Marshall was working and going to school full time so we didn't get out much.  I finally called the tv repair place and this is how the conversation went:
"I'm calling to find out when our tv will be fixed."
"Sure, what's your name?"
"Last name is Snedaker."
Silence.....
"I'm not really sure when your tv will be done, you'd have to contact the tv guy."
I'm mad at this point because our tv has been gone for a while already...
"Listen, I'm at home without a car, with a toddler running around, it's freezing outside, and I have no tv.  I'm tired of not knowing when our tv will be fixed and I've had it!"
He could sense how mad I was.
"We'd love to give you a loaner tv until yours is fixed."
End of conversation.  I was thrilled at the fact to have a tv and called to ask Marsh to pick it up on his way home.  Of course he walked in the house with a 19 inch tv that looked like it was from the 80's.  And come to find out the guy I chewed out over the phone was in our ward at church.  OF course.  It had flaps on the side you had to open to have sound and the color was horrible. We're talking everyone looked like green martians or like they were sunburnt. It didn't matter - it served it's purpose.
Many months later when our Sony was unfixable, we bought a big screen off Craigslist for $150.   Marshall and his brother and dad drove to Pocatello during a blizzard to get this ginormous tv that was extremely heavy. It worked ok, but started having issues too and since it was an older tv, you could only watch it if you were sitting straight on.  We sold that at my cousin's garage sale for $20.  When we moved down here to Lehi, we looked around for a new tv.  We wanted something that was going to last and ended up getting our 32" Samsung for just over $400. 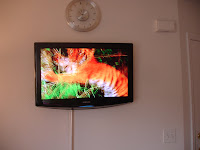 (It was a store model, and we used some comcast mail in rebates and had a 15% off coupon.)  A steal of a deal, although we decided to put a 3 year warranty on it just in case.  Our Samsung has been kind so far, and I love having a tv mounted on the wall that neither of the boys can touch, and being able to watch shows in HD :)  My best friend.
It doesn't just stop with our tv either.  We recently bought our 4th dvd player.  Yes you read that right, 4th.  We've always bought cheap dvd players and they never seem to last.  Imagine that...
My mom gave us a portable dvd player last Christmas.  It lasted 7 months.
Next there's the ipod.  I bought Marsh an Ipod for Father's day 2 1/2 years ago.  About a year after that, Chandler decided to throw it in the toilet right before church....it doesn't work anymore, but I really didn't need to tell you that, right?   And last year for Christmas, I got Marsh a shuffle since we didn't have our ipod anymore.  Yeah, so I lost it working out about a month ago.  Way to throw $60 out of the window, right?
And then there's our Sony camera that got stuck behind the couch at my parent's house.  The lcd screen got shattered.  It still works, but you can't see anything or change the settings.  Sadly, we have added to our electronic deaths this last week and it was my own fault.  I'm doing diaper reviews for my babes and kids sites and have been buying every diaper I could find in the last couple months.  (Note to the wise, Target brand diapers have gone downhill)  Chandler blew out of a diaper, halfway up his back.  I decided to take a picture with our newly acquired Canon camera we've had about 3 months.  (A picture of his back, mind you.)  Marshall was yelling at me from the other room not to take a picture, and I didn't listen.  It didn't really turn out anyway.  I put Chan in the tub and started running the water while I went to change out the laundry.  Then I heard it, "I take a pic!"  I darted into the bathroom to see Chan playing with our camera in the tub.  Ugh....
The camera has dried out and it still works for the most part, but I can't get the flash to work anymore and I don't think the quality of pictures is as good.  The Sony actually takes better pictures, I just can't see the end result until I've hooked it up to the computer.
I don't think we are meant to have good electronics, or nice things in general.  I'm sure it wouldn't have anything to do with two little boys roaming the apartment ;) (And their spacey mom forgetting to put things up out of their reach.) 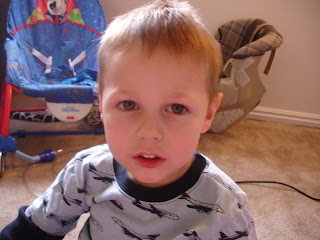 Poor Tiffany...Don't you love having boys that get into everything. I love having a little girl that listens about 50% of the time. Good luck with the cameras!

I have bad luck with cell phones, too, but that's a whole other story!

I totally agree about Target diapers - they are terrible! (But in all fairness, were they ever really good?) We have tried every brand but have been most impressed with Walmart generics. They are inexpensive and now (new feature) contoured with flex tabs like more expensive brands. Our thought is, why pay a lot when they're only going to get pooped in? Haha.

That stinks about your electronics. We have our fair share but, as you know, Dev is a fix-it guru. The man can fix anything. In fact, our LCD tv screen stopped working completely after 6 months (bought brand new) and was still under warranty. The company couldn't figure out how to fix it for less than the cost of replacing it so they sent us a check for full reimbursement. Devin fixed it himself for $4. And yes, we still kept the reimbursement check (we considered it a payment for him having to do the work since they were incompetent ). NICE! I wish we lived closer, Dev could totally fix any of your non-water damage things, I bet.

I think a lot of it is from the two little boys. I watched Chandler put part of a cracker in one of your dvd players once. I have to agree the t.v. mounted on the wall is a good thing because your boys can't get to it. :)

LOL. Thats the fun of having kids. We have had our share with you kids when you were growing up. Its just STUFF!

UNREAL. You really do have the worst luck when it comes to electronics. Hopefully the third times the charm, or in your case, the 8th, 9th, 12th...

Are you really coming in January?!