We moved my c-section up a day, to the 21st so that means we have exactly 3 weeks left!  I'm freaking out a little bit because all of a sudden I don't feel ready! 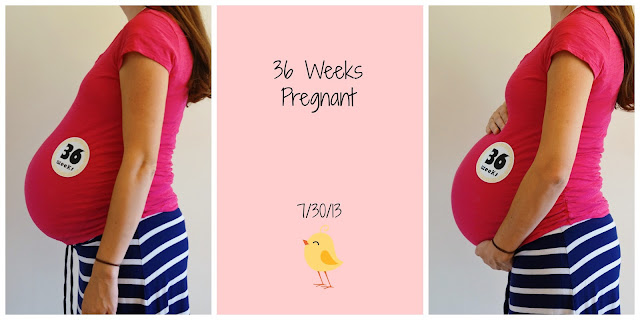 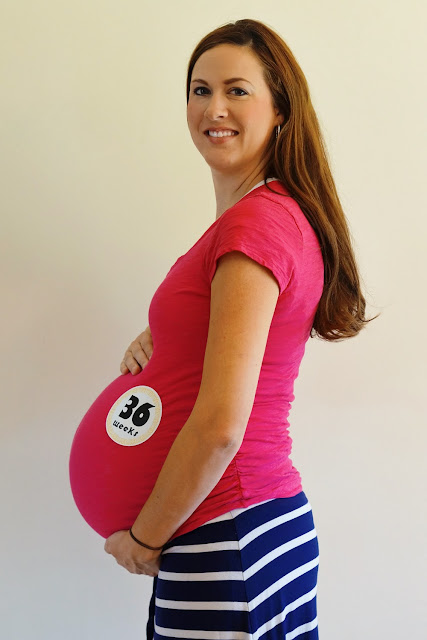 On July 9th, we celebrated 9 years of marriage!  It's gone so quickly, it's almost seemed like a blur.  We didn't do too much just because I had to work that day, but we did go out to eat with the boys.  I told Marsh that we need to do a big vacation for our 10 year anniversary and he definitely agrees.  Time to start planning and budgeting for it now so that it does happen next summer.  This year was also a fun one because it means that we've been together for half our lives, 15 years.  That's what happens when you get together at the ripe age of 15. ;) 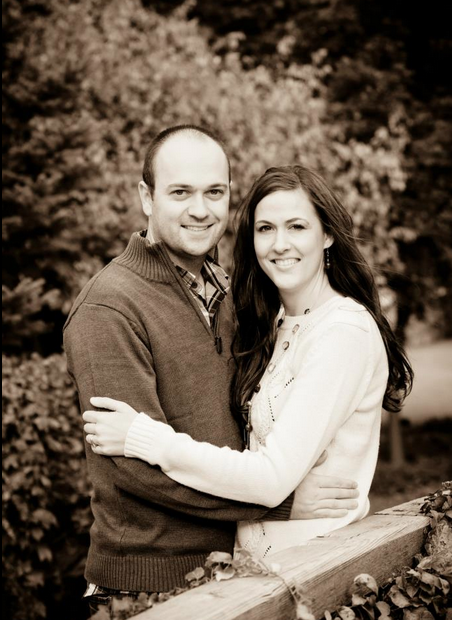 We are going to be headed back to school in just over 4 weeks.  I can't believe the summer has gone by so quickly, but in a way, I'm ready for the boys to go back to school.  I think they are both excited as well.  We've stayed very busy this summer and have been out and about doing a lot.

Here are some of the things we have done: 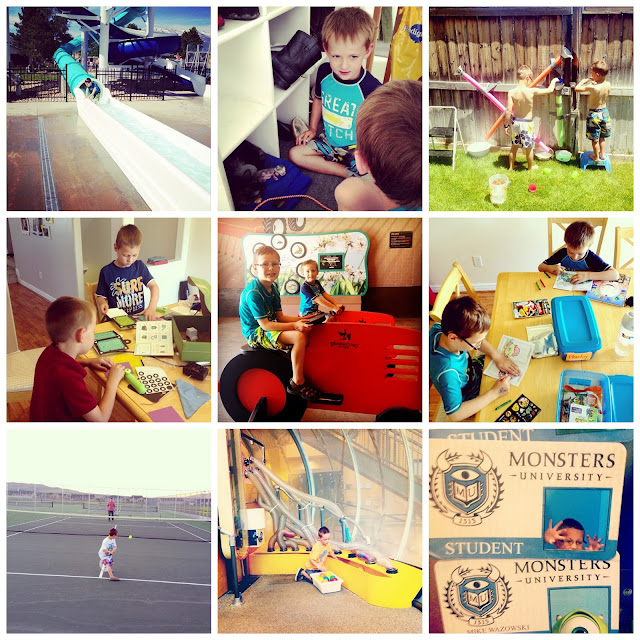 We have 2 family reunions and a few more weeks of playing before we head back to school.  It's definitely been a fun summer so far!
Posted by tiff snedaker at 6:13 PM 2 comments: 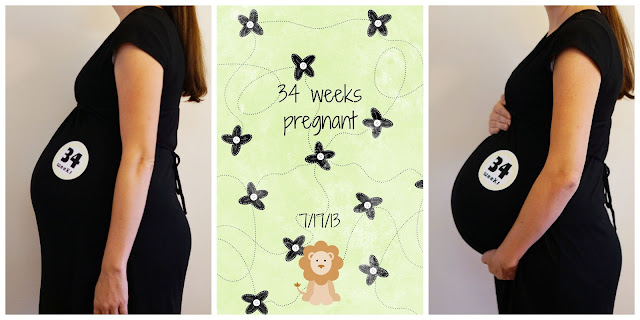 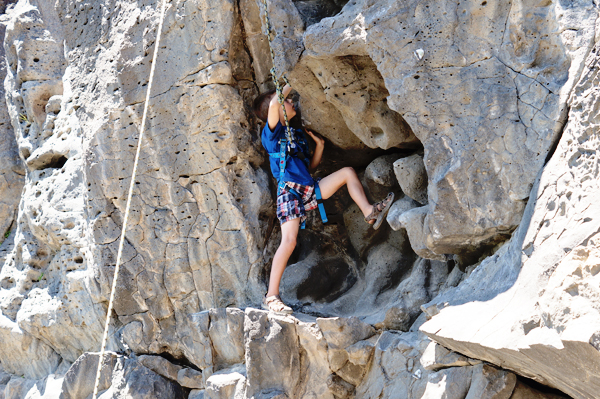 The day after the 4th, my brother Geoff wanted to take the boys climbing.  He has a child harness and the boys were so excited to go.  My brother is super outdoorsy and loves climbing and hiking.  You can find him on the side of a mountain in his spare time when he isn't working on his Master's Degree.  We went climbing about 40 minutes from where my parents live.  There was one spot that we were going to go, and then we found out that they started charging per person.  Geoff said he knew of another place, but it was a short hike up to it.  I figured I could do a short hike, even though I'm almost 8 months preggo.

Once we got to the spot, I realized it was straight uphill and rocky.  It was kind of unnerving.  I was in flip flops and it was REALLY steep.  It was not a fun hike and not one that I would do again while pregnant.  I was also super paranoid that the boys were going to slip and fall down the side of the mountain.

Once we got up and settled, Geoff got everything set up while Marshall was at the bottom helping him. My parents came along and it was really fun to watch the boys climb. 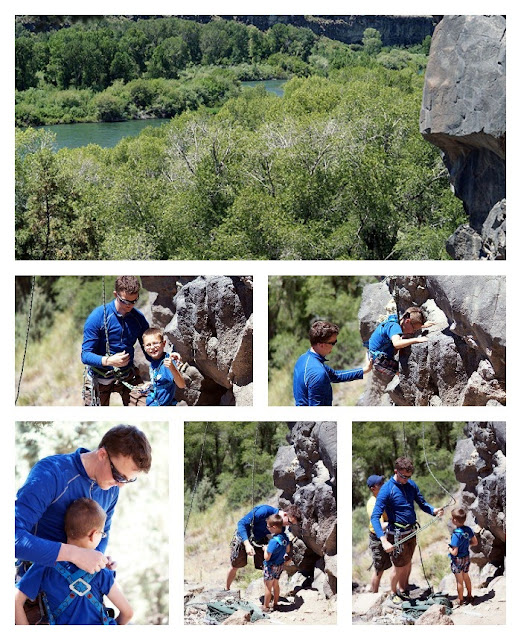 Chandler went first and did a really great job!  I think both of the boys liked the fact that they could let go of the rock and they would just hang there.  It was interesting watching them problem solve to try to get up. 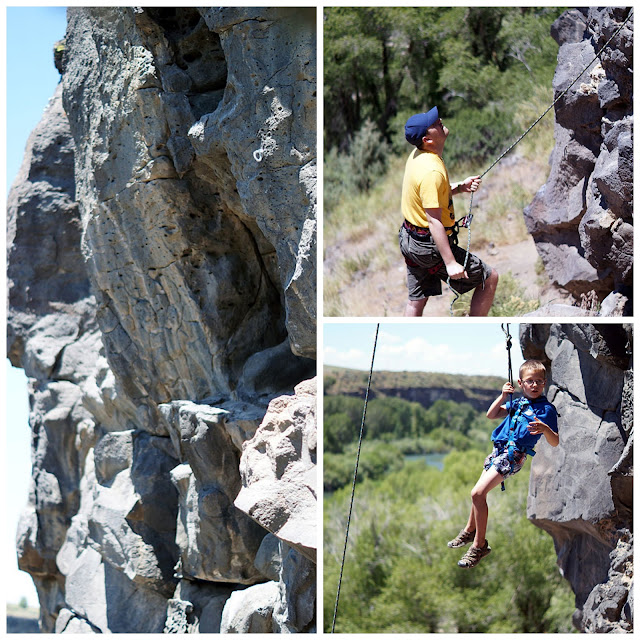 Rowan was next to go and he thought he was spiderman.  I think he spent more time hanging than climbing but he did an awesome job for 5 years old.  As he was suspended and coming down, he started shooting spider webs out like he was spiderman.  It was so funny to watch. 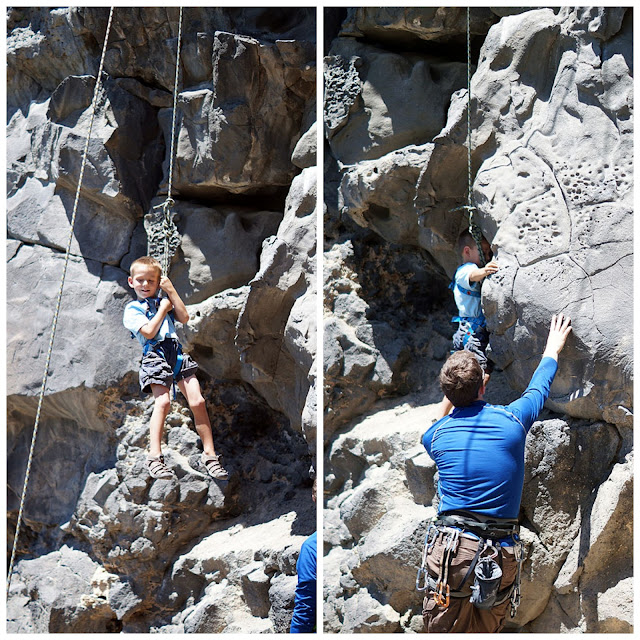 Hiking back down the mountain was even worse than hiking up.  I almost slipped and fell a few times, and had a death grip on Marshalls hand as he was stabilizing me on the way down.

The boys loved climbing so much and can't wait to go again.  We have a family reunion at the first of August and Geoff said he would take the boys climbing again.
Posted by tiff snedaker at 1:30 PM 1 comment:

In order to beat the heat, we've been doing a lot of swimming.  We have the pass of all passes which gets us into Seven Peaks in Provo and Salt Lake City, but I think most everyone has them and I've heard that it's super busy.  I haven't been brave enough to really brave the crowds so we've been going to some different pools.  We've been down to the Lehi outdoor pool a few times and the boys like that one.  It's got a big pool and a couple of water slides.  I also did some blog work with Cowabunga Bay. They sent us enough passes for us to go a few times.  After I finished the review, they were so pleased with it that they sent us 8 more passes!  We've been twice and will be able to go 2 more times.  I really love this waterpark because none of the pools are deeper than 3 feet.  Both of the boys can touch without life vests and there are a lot of attractions for kids. 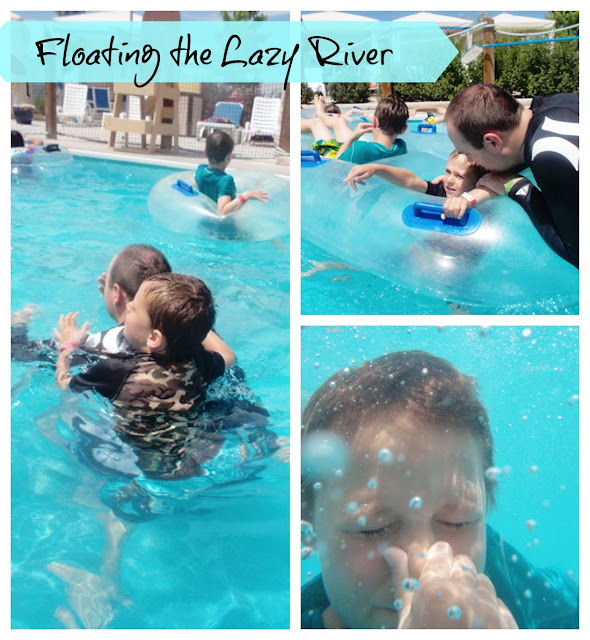 This last time that we went, we got the boys snorkel masks from Target.  They were little fishies the whole time and loved it. 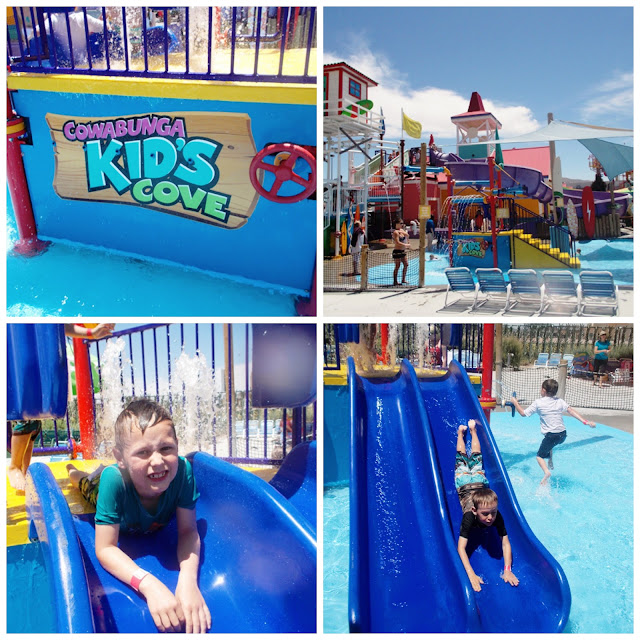 Posted by tiff snedaker at 1:05 PM No comments:

We went to Idaho for the 4th of July this year.  We headed up on the 2nd and came home on the 5th.  The night before the 4th, we had a barbecue with a lot of my dad's family.  It was fun to visit and catch up with some cousins that I hadn't seen in a while.  Afterwards, we did fireworks and the kids were all so excited.  I didn't really get any pictures that night since I was just enjoying everyone's company.

The next morning, we got outfitted in our red, white and blue and headed out to enjoy the festivities.  I love that the boys will still let me buy them matching outfits.  I keep wondering when they will complain but they actually like it, so I'll continue as long as they will let me. 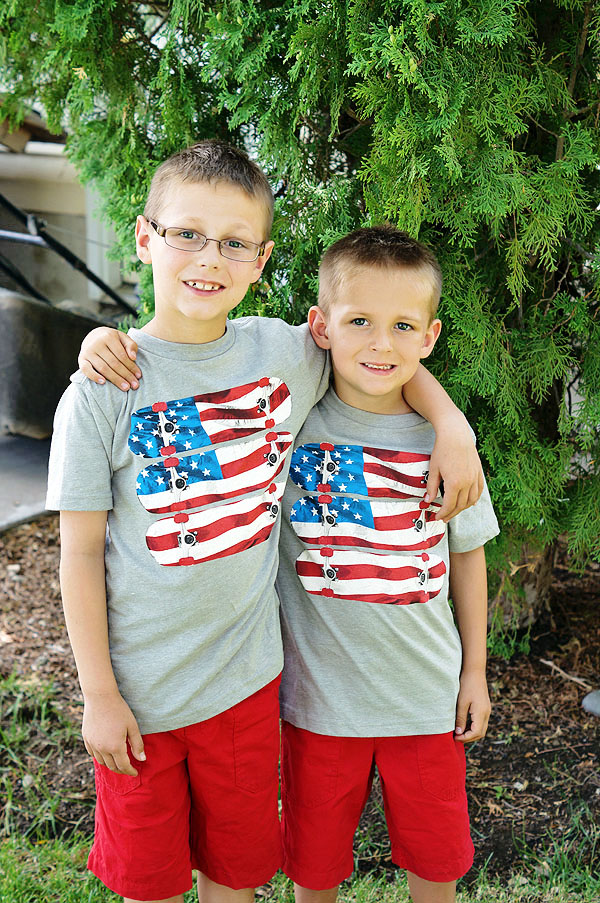 We started out the day with the Rexburg parade.  We stayed for almost 2 hours and didn't even see the end of the parade.  The boys loved seeing all of the floats and running for candy.  At first, they were disappointed when they didn't get a piece of candy, but after we were there for 2 hours, they didn't even want to run for it anymore.  We were at the end of the parade route, and there were a lot of people emptying out their bags of candy.  It was fun to see my niece that I haven't seen since December.  She's changed a lot! 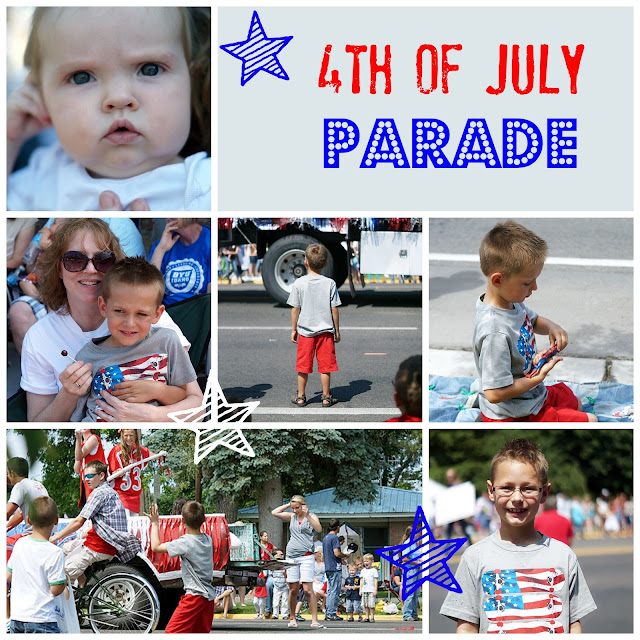 The rest of the afternoon, we hung out a gma & gpa Snedaker's house.  Marshall's brother Parker had a pinata he had made during school and saved it so that we could break it on the 4th.  The boys thought it was fun taking turns being blindfolded and hitting the pinata.  It was a little cooler in Idaho, but not much.  The weather was in the 90's and I spent a good portion of the day just sweating.  I missed our air conditioning that we have at home, and I really won't take that for granted the rest of this pregnancy.  It was hard not to feel tired too because of the heat.  We had dinner at Snedaker's which included steak and fruit pizza. 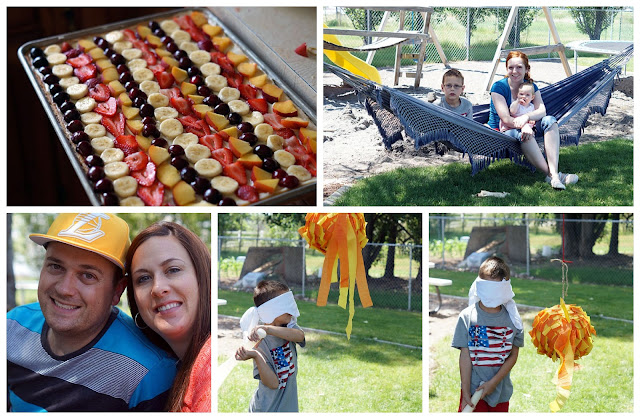 After dinner, we headed down to Idaho Falls for the fireworks.  We had staked out a spot the day before so we had a nice big spot for my family and Marshall's family.  Everyone showed up and we visited and the kids played while we waited for the fireworks. 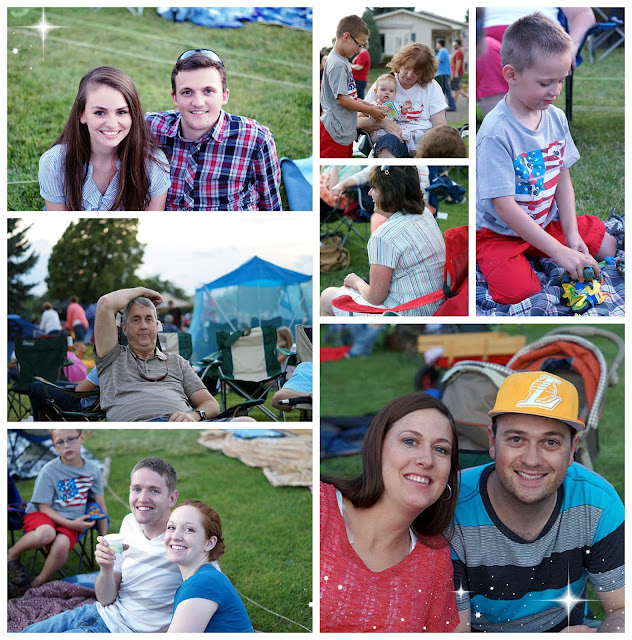 The fireworks were supposed to start at 10 and when they didn't, everyone wondered what was going on.  We got word that they were looking for a man that had gone swimming in the river.  They finally started the fireworks at 11 pm and postponed the search.  The fireworks were amazing as always and lasted about 35 minutes.  I think I read somewhere that they lit off over 17,000 fireworks and it's the biggest show this side of the Mississippi.  It's a pretty amazing show and nothing that we've seen here in Utah has ever compared.   Rowan fell asleep on my lap about 5 minutes after the fireworks started.  He was so tired from playing all day long. The continued searching for the man after the fireworks show and did find him a few hours later, he had drowned.  Very sad.


I'm glad that we were able to celebrate our indepedence and be with family this year.
Posted by tiff snedaker at 12:47 PM No comments: 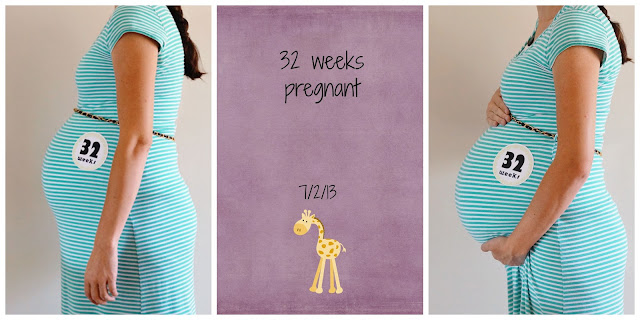 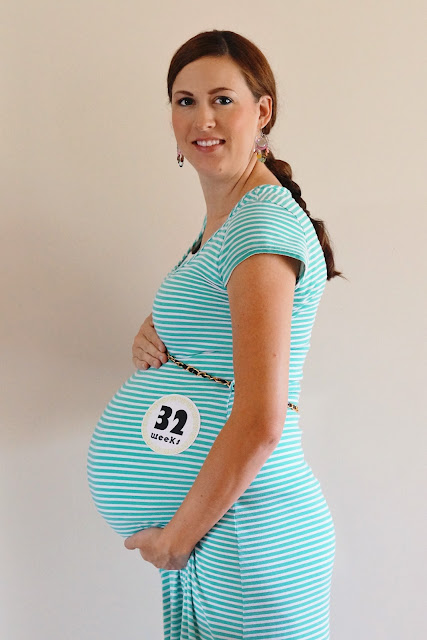 Posted by tiff snedaker at 12:08 PM No comments: