We went in for well child visits this week.  Chandler's 7 year and Rowan's 5 year.   They are both growing great and are both 50% for both height and weight which is right where they have been for years.


The boys were both great and were very patient.  Remember this post from last year?  Rowan was much the opposite as he was at this last appointment.  At that point, his pediatrician was pushing us to see a child psychologist and get a diagnosis for Rowan.  I didn't feel that it was necessary at the time and wanted to see how he would do in the school's program before labeling him.  We saw a different pediatrician this time and although he could see Rowan's delay a bit, he didn't seem concerned that we needed a diagnosis.  Rowan has made SO much progress over the last year.  He was patient with the Dr. and didn't even flinch when he had to get his shot.  I think it goes to prove that sometimes mommy intuition is better than a horrible 10 minute dr. visit.


From the moment we went back to the room, Chandler told me he wanted to go into the xray room so he could see his bones.  He was disappointed when I told him that it was only for kids who have something broken or a problem.  I talked with the ped on how Chan has been having small accidents during the day over the last 3-4 months.  Chandler feels like it is involuntary and can't help it.  The Dr. decided to do an xray of his tummy and Chandler started jumping up and down and cheering.  The xray showed that Chan is just basically so backed up with poop that it is causing his bladder to spasm, which causes him to involuntarily leak sometimes.    Poor boy.  What's interesting is that the pediatrician says he has this conversation at least 3 times a day with parents.  He says it's almost always diet related, which is scary.  A lot of diseases are diet related and I know we need to make changes now.  I know my kids have been picky in the past, but Chan knows better and he's not getting the option anymore.  Chan and I had a discussion on how he needs to eat more fruits and veggies.  He seemed open to it and last night was eating clementines before bed which is a huge win for me since the only fruit he will normally touch is apples.  We are having him go on a cleanse this weekend with miralax and ex-lax.  I work all weekend, so I assume Marshall will be staying close to home with the boys.

Posted by tiff snedaker at 11:04 AM No comments:

Marsh turned 30 on the 7th.  I was hoping to have some sort of wonderful plans, but I feel like I kind of dropped the ball.  I think I spent so much time planning and spending on his Lakers tickets for Christmas that I didn't do anything too amazing for his birthday.  I still feel bad, but hope I can make up for it on our trip to LA next month.  Rowan and I surprised Marsh at work with an edible bouquet.  Then we went out to lunch at TGI Fridays.  I wasn't feeling very good and Rowan laid down on Marshall's lap and slept instead of eating his food.  It was a lunch date cut short as we got home and Rowan had a fever and I still didn't feel good.  That evening was pretty low key, we just stayed at home.  I can't believe that this is the year we turn 30, and it's even more crazy that we've been together half our lives.  Who would have known that when we liked each other at 15 that here we would be 15 years later.  I love you Marshall and can't wait to spend another wonderful 30 years with you!!  Happy Birthday love! 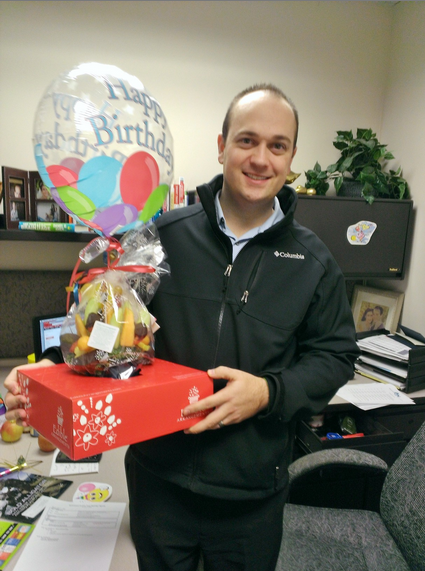 Of course since we got so much snow while up in Idaho, we went sledding before we went home at Freeman Park in Idaho Falls.  We found a perfect hill and the boys had a blast with their cousins. 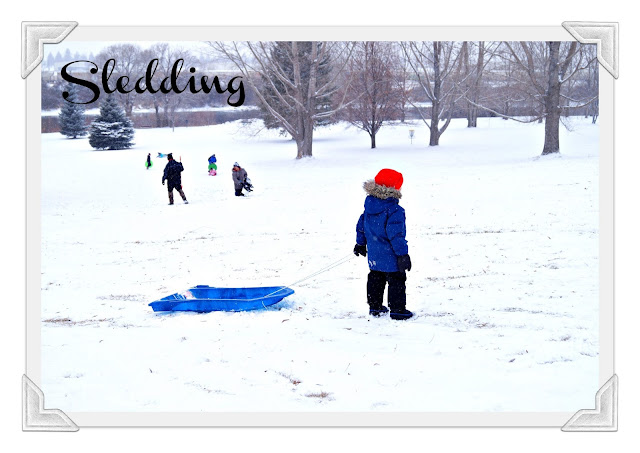 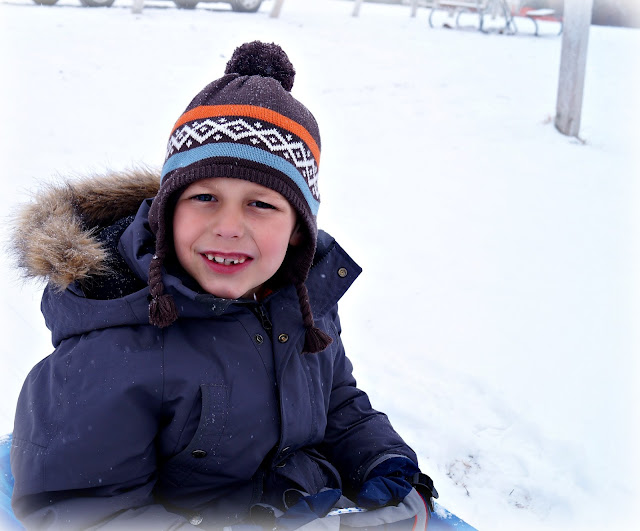 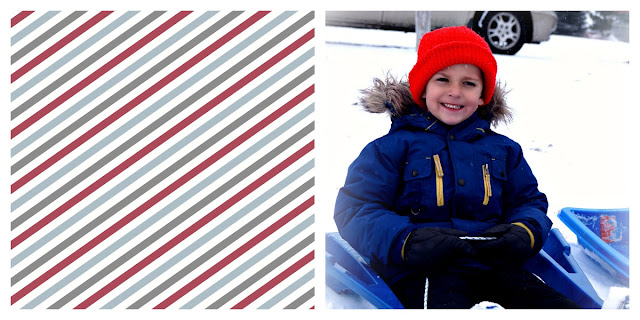 For the 6th year, we spent New Year's with The Birchs.  Who would have known when we were living in the same complex that many years ago that we would continue the tradition for years to come. We played a new game they had called Suspend.  It was fun and super frustrating all at the same time.  The boys had a great time playing together and it was fun to ring in the new year with great friends! 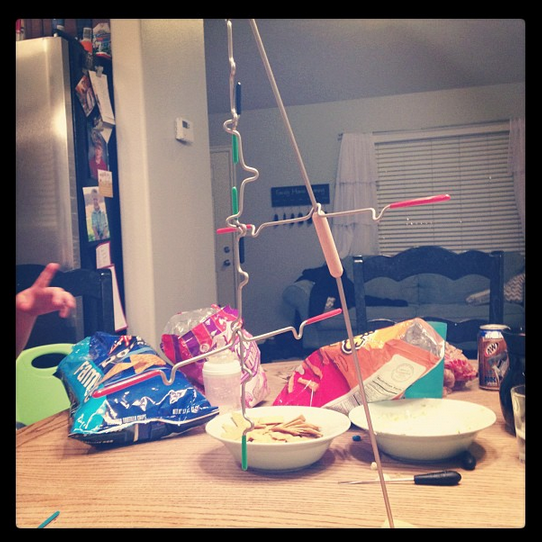 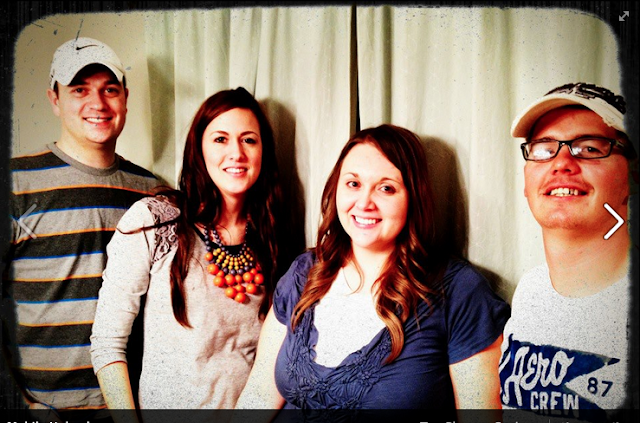 Posted by tiff snedaker at 12:48 PM No comments:

Christmas 2012 was spent up in Idaho like we usually do.  We were the only ones coming home from my family and most of Marshall's family would be there.  We spent our time jumping back and forth like we usually do.  On Christmas Eve, we had dinner at Marshall's parents.  Then we played chimes and did white elephant gifts.  The kids were all wound up, and I learned to make balloon swords which they were all excited about.  Rowan got Monsters Vs. Aliens for one of his gifts.  I asked him to smile and instead he looked really depressed.  Funny boy.

That evening, we headed back to my parent's house.  The boys opened their Christmas jammies and getting a good picture in front of the tree was like trying to pull teeth.  Instead of good pictures, I have a lot of outtakes.

We skyped with my brother Geoff and his wife and watched them open their gifts from us and the boys went to bed.  I don't think they got into bed until 10:30, it was a late night.  It was the fastest they've ever gone to sleep though!  Notice the giant snowman and grinch they slept with.  I thought it was pretty darn cute. 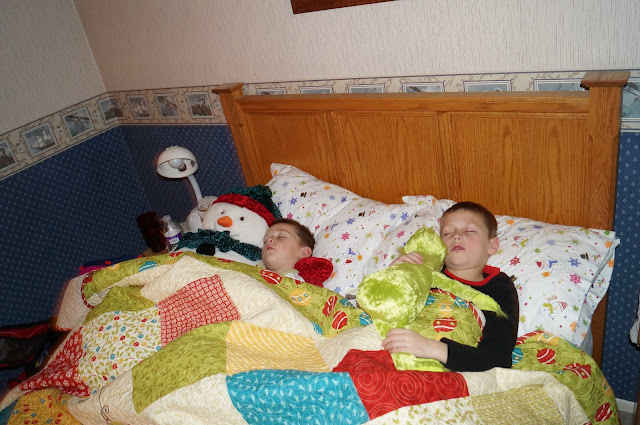 Santa came and spoiled the boys.  He also brought a note saying that he was taking Roland, our elf back to the North Pole.  Marshall and I were up by 8 and actually had to wake the boys up at around 8:15 since they were still asleep. They were so excited with all of their gifts.    I was really anxious for Marshall to open one of his gifts since it was something I knew he'd always wanted to do!  I got him 7th row seats to a Lakers Game in LA next month.  We are going together and taking a little couples vacation which I'm excited about. 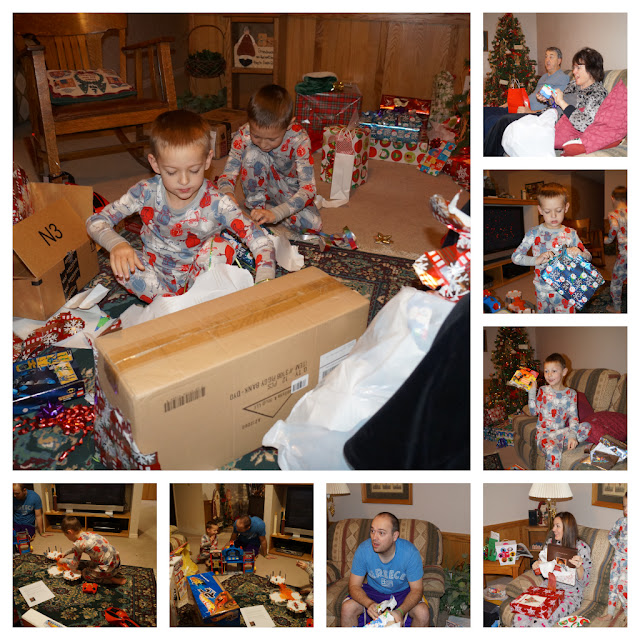 We spent the morning playing and made our traditional brunch at my parents house with ham, crepes, hashbrowns, eggs and orange juice.  So good!! 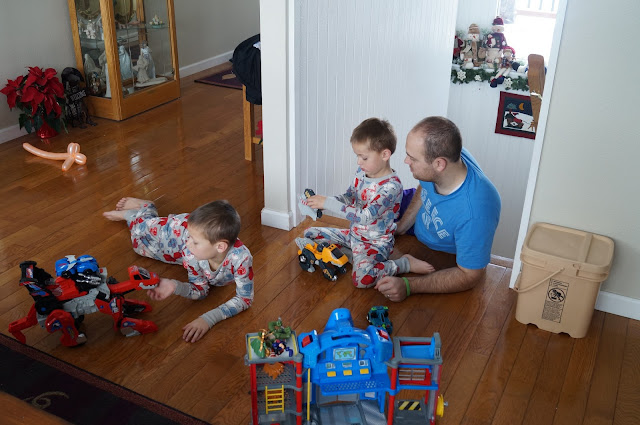 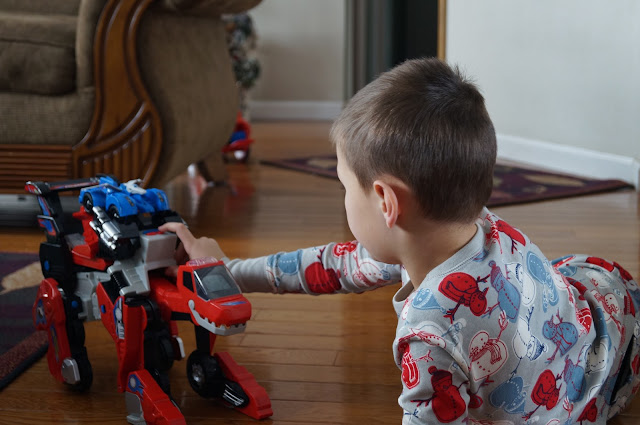 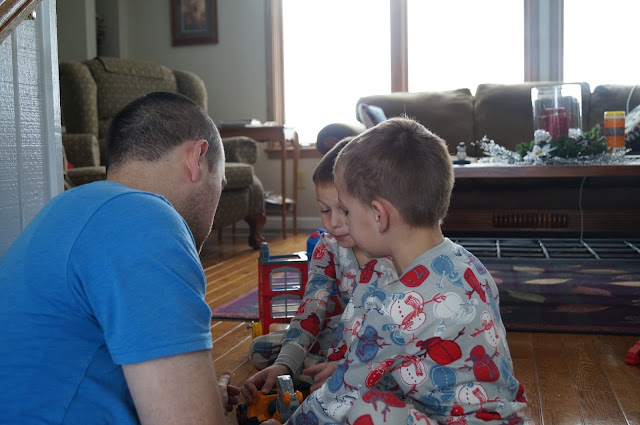 We had a white Christmas with a lot of snow which was exciting!  In the picture below, you can see my parent's backyard and just how much there was. 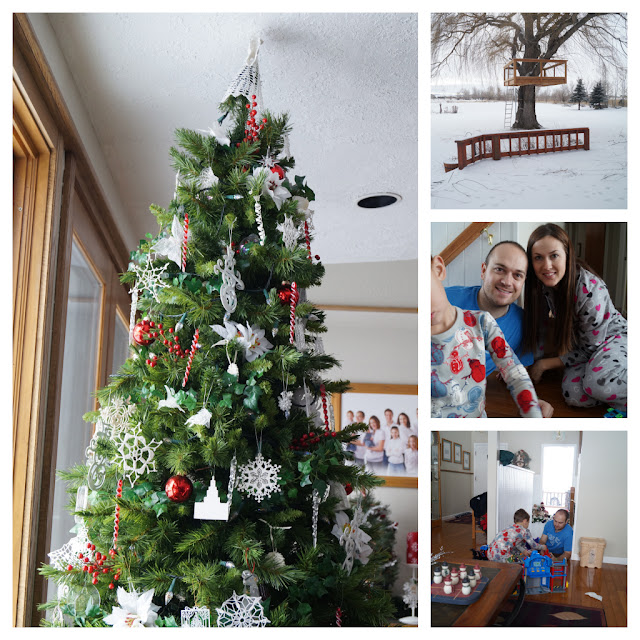 In the afternoon, we headed back to Marshall's parent's house.  We exchanged more gifts with his family and had a fantastic Christmas dinner.  That night we played games and enjoyed each other's company. 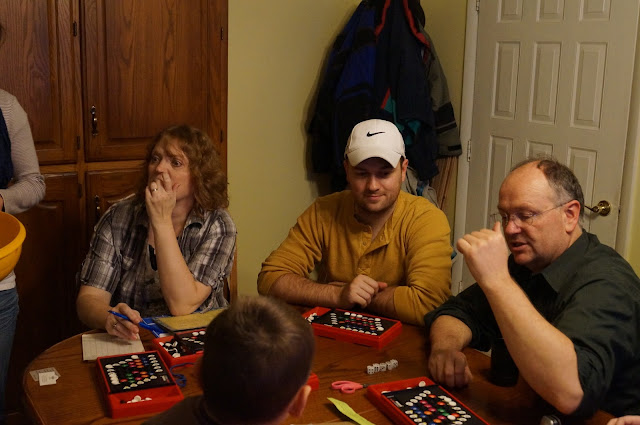 Posted by tiff snedaker at 12:08 PM No comments:

On Dec 21st, I took my abdomen registry again.  I had been studying for a few weeks, but Marshall told me to only focus on my exam the week before I took it.  I literally did nothing but study.  Didn't cook or clean, blog, etc.  I was so nervous as I barely didn't pass it last time.  I knew a lot more of the content on the exam this time around and felt pretty good coming out of it.  I did so much better and passed with flying colors!  I wasn't sure if I should scream for joy or cry.  It was absolutely amazing.  It's so nice to finally be registered and I'm wanting to take another registry in a few months, probably OB/GYN.  I need some time for me though, to just NOT study.  Along with passing my registry came a nice $6 an hour raise.  I'm making almost 3 times more than what I was working as a health unit coordinator doing clerical work, which is what I was doing only 1 year ago.  It's nice to have a job that I love, but that pays incredibly well too.  Ultrasound school was definitely one of the most challenging things I've done in my life, but it's been so worth it. 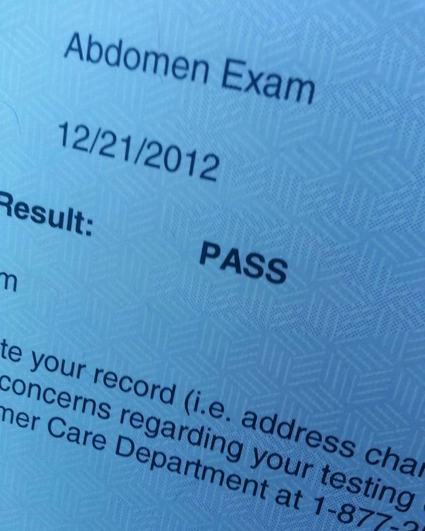 Roland, our elf came back to visit this Christmas.  He came right after Thanksgiving and stayed until Christmas morning.  Christmas morning, Santa left a note saying that he took Roland home but he'd be back again next year.  The boys have loved this tradition the last few years.  He brought the boys a movie, a fun chocolate candyland game, special Christmas cereal, rode their tricycle, wrote on our mirror and more.  Here are some of our favorite photos of Roland and his elfcapades that he was up to. 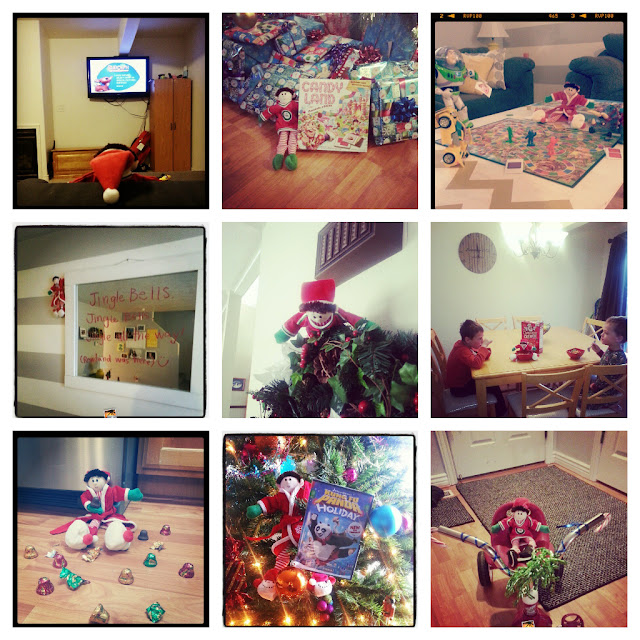 Posted by tiff snedaker at 12:22 PM No comments: