First off, I'm back from Austin and feeling a little gaggy. Ok, a lot. I've been making trips back and forth to the bathroom. I've had motion sickness before, but not this badly. I was SOOO close to puking on the airplane but managed to keep it in until right after I got in the car. (NO, I'm not pregnant because I know someone will make a comment like that. ;) ) Anyways, I have pictures and such, but am not really in the mood to upload them and feel more like lying around until the next bout hits me.

On to the real reason of this post. I will be the first to admit that my last name is odd. It just is, and there's no way around it. It's especially odd because I went from such a normal, maiden name (Nielson) to a weird VERY mispronounced last name (Snedaker) After working in the ER and seeing all of the last names people have, I realize it's not so weird anymore, however it is mispronounced ALL of the time. Correct pronunciation: Sneh-da-ker. Easy enough? Apparently not for some. This morning when I went to check out of the hotel, the woman behind the front desk looked at her screen for a long moment and I know she was trying to figure out how to say my last name. Finally, after much hesitation, she said, "How was your stay Miss Snee....dock....er?" It sounded like it was in fact three different words. I said fine and was on my way. I should be used to it right?

The man who took me to the airport was even worse. As he opened the door, he said: "Good morning Miss Sneed Wrecker." I quietly giggled to myself about this the entire way to the airport. It sounds like I'm some sort of seed or garden wrecker when you pronounce it like that. I could go on and on about how it is mispronounced. Every once in a while, people will get it right on the first try, and I must say that it's very impressive. Other times, if people seem like they are struggling, I say it for them. It's not that bad though.
Say it to yourself:
Snedaker.
Posted by tiff snedaker at 10:46 AM 7 comments:

I took all of the highlights from when we all ran Utah Valley and made it into a movie. I had way too much fun making it. 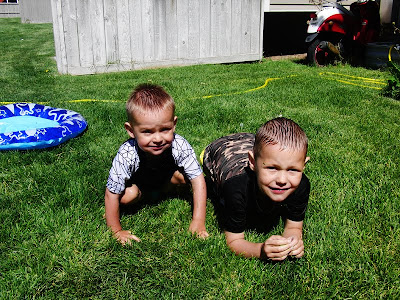 We were outside this morning playing in the pool, slip n' slide, and in the sprinkler, and Chandler thought it would be fun to act like frogs. Rowan followed suit and they would hop and ribbit down the slip n' slide, through the pool, and make the round again. Chan says once they got into the pool they were transforming back into boys and would be frogs when they got out of the pool again. I love his imagination. 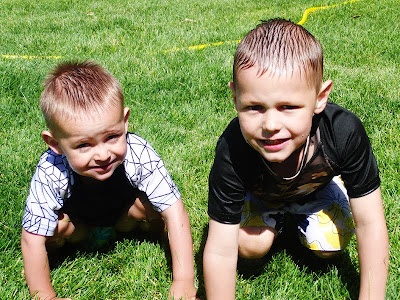 About the last month, I've tried to keep this blog full of positives and our darling little boys. It's worked pretty well, yes? In reality, I've had a lot of things on my mind, and feel like I'm on an emotional roller coaster. Mostly about how things are going to work the next few years with school. I guess if you don't talk to me often, or don't see my Facebook updates, you wouldn't know that I'm headed back to school this fall.
In March, I applied to the Ultrasound program. It is a partnered program between Intermountain Health Care and a local community college. I'd applied to an ultrasound program back when I was a sophomore in college, and got shot down. About a year after that, Marsh and I got married, and then I got pregnant with Chan 3 months before finishing my 4 year degree, so that plan was put on hold. Since IHC would pay for my school since I am employed by them, I decided that now was a good time to apply. I have no idea how many applied, but I do know that they interviewed probably around 80-100. There were 9 different interview times with 9 people in my group interview. I tried not to hold my breath because they were only accepting 16 students into the program.
About a month ago, I found out that I actually got in! I felt a crazy range of emotions from excitement and sense of accomplishment to pure guilt. Let me explain further. In order for IHC to pay for my school, I have to continue working 24 hours a week. On top of that, the program is 2 years, year round. The first semester isn't too bad. 3 days of classes, 4 hours. It's after that when it gets to be intense. Each semester after that is a class and anywhere from 24-32 hours a week in clinicals.
A few weeks ago, I called around to preschool daycares to get rates. They were staggering. Then I started having the complex in thinking that I was a terrible, selfish mom for not being at home with my kids, because that's where I'm supposed to be? I've had a few comments from other people that have hurt me in this way, but I've come to the realization that I love my kids and that's what matters. It doesn't matter what other people think. I wondered who would be able to watch them for me, and what would happen when Chandler goes to kindergarten next year.
I've also realized that I'm not going to be able to take on near as much with my Babes and Kids blog and it makes me sad. After almost 2 years, it's grown from a fun hobby to a bit of a business with extra income for our family each month. I really enjoy doing it and the neat experiences that it's given me.
After much bawling on the phone to family and talking to Marsh, I realized that it will all be ok and work out. I'm lucky to have such a supportive husband that is ok with it. He's even said that he's not sure how everything will work out, but he's behind me 100%. Love that man. The next two years might be crazy, but I know I will make it through. I know there's some things that I still have to work out, and luckily I have some of the babysitting worked out for this fall. I guess at this point, I just have to take a deep breath and take it a day at a time. Trust in the Lord and spend lots of quality time with the kids and Marsh when I have it. I am so excited to be doing something that I've wanted to do, it's just the time thing that gets to me. School starts August 25th and I could really use some encouraging words.
Posted by tiff snedaker at 10:13 AM 16 comments:

It's finally gotten to the stage where the boys are starting to play really well together. You know when you find out you are having a 2nd baby and think that you are excited for them to play with their older sibling? We are finally there. (Years later) Of course it's not perfect. Chandler still makes Rowan scream and Rowan hits Chan for no reason, but it's fun to see them interact. 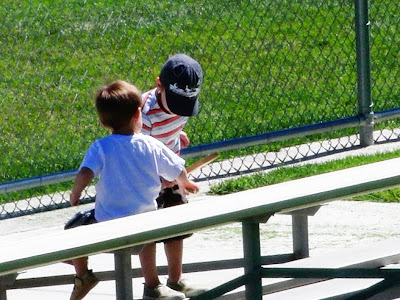 Rowan totally looks up to Chandler, and wants to do and play with whatever Chan is. Chan is awesome about being protective and sticking up for Rowan and sometimes it just makes me melt. Yesterday when we were at the park, they played on the baseball diamond together for quite some time. Chasing each other, discovering together, and just having fun. I love it. Could they be any cuter? 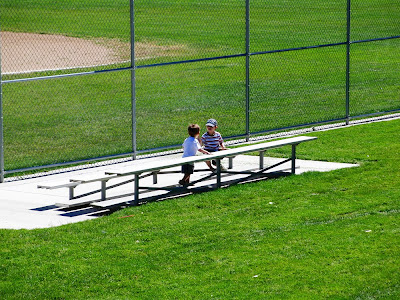 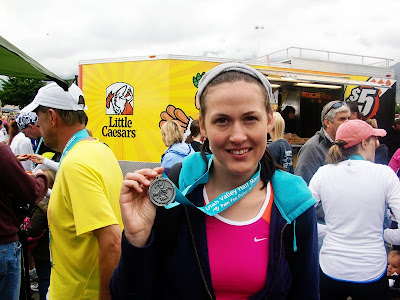 I can't believe I actually ran a half marathon! It might sound dumb, but it made me feel empowered. We started out Friday night with a pasta party at Clint's place. Then I went down to Orem and stayed in my parent's hotel room with them. They were busing us out super early, so it seemed like a good idea. We went to bed just after 10 and I tossed and turned and really didn't sleep much. We got up at 3 am and were out the door by 3:30. My mom, Avry, Jason and I caught a bus to the half marathon point. Since my brother Clint was doing the full marathon, he rode a different bus. It was pretty chilly when we got there, and stood around for an hour trying to get close to a fire pit. Once it was time to go, I was so excited. I felt like I needed to use a bathroom around mile 3, but wondered if it was just nerves. There was a portapotty (sp?) every few miles and there were always 5+ people lined up. I paced myself and it didn't seem bad at all. It rained lightly for about 30 minutes and the weather was very cool. I started to hurt a little bit around mile 9-10 but worked through it. I finished in about 2 hours and 23 minutes and I must say I'm super proud. When I started training, I wanted to be able to run a 12 minute mile. I ended up running a 10:51 average. It was amazing to be able to run it with family and I'm amazed at my 60 year old mom who ran it in under 3 hours! WOOT! We didn't get any pictures of the whole group which stinks. I think most of us were exhausted and not feeling well. I went home to soak in the tub and take a nap!

Me with brother Clint & Mom 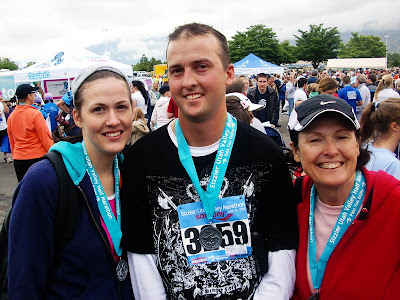 So on to bigger and better things. I might be getting crazier because I am running a full marathon in September!
Posted by tiff snedaker at 1:07 PM 11 comments:

Chan's getting pretty independent in a lot of ways. He's gotten good at getting his own cereal in the morning if I am slow getting out of bed. He rarely spills and puts his dish in the sink when he's done. I think Rowan has been watching him, because today he attempted to do his own. Here's what I found. 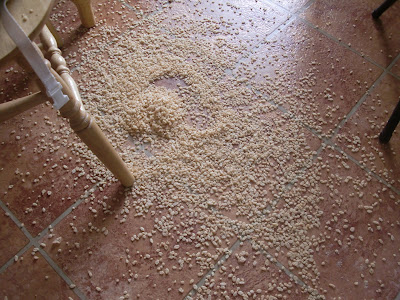 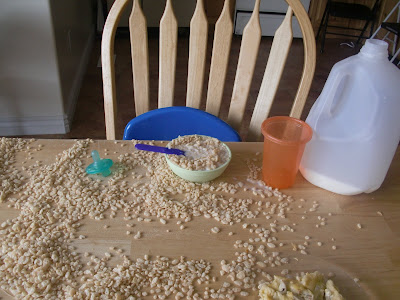 Looks like he abandoned the cereal after just a few bites. What's funny is that there is cereal EVERYWHERE, but he didn't spill any milk? Funny boy.
Posted by tiff snedaker at 9:35 AM 3 comments:

Oh boy, I'm loving this warm, warm weather. The boys ate dinner outside today. I think they liked it. 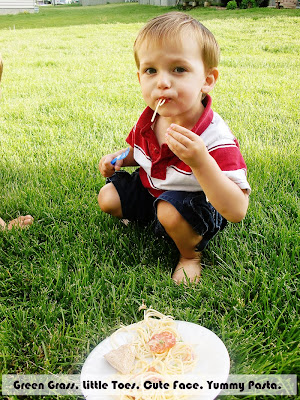 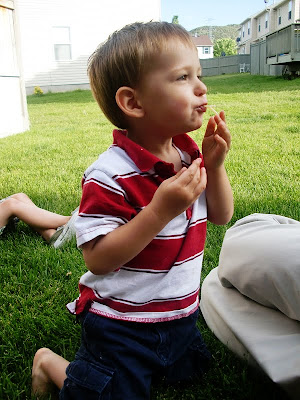 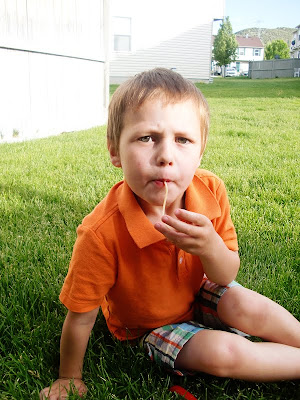