Marsh and I were talking last night about Rowan not sleeping through the night. He averages 3 feedings at night. While I know he doesn't need it, who's to say he's not hungry? Take me for example. When I became pregnant with Chandler I suddenly had to eat at night. I would get up 2-3 times during the night to have a "snack." Sometimes it would be a bowl of cereal, some yogurt, leftovers. There was even a 2 week stretch where I craved green beans and would open and eat a can during the middle of the night, every night. Chandler loves grean beans now - one of his favorite veggies. Ironic, huh?
Chandler also went through a phase around 18 months where he would wake up in the night screaming and crying. We thought he was having nightmares, maybe missed his mom and dad. Nope, just hungry. Even if he ate right before he went to bed, he still needed something to eat during the middle of the night. It lasted a couple weeks.
Since I get up quite a bit at night with Rowan, I realize just how hungry I am and sometimes can't fall back asleep until I've had something to eat. So if a baby is supposed to be able to go an 8 hour stretch at night without eating, why can't I? LOL. I'm lucky if I can make it 4 hours. Granted, I'm not starving - but I sure can't go back to bed with my tummy growling. I guess Marshall is the only "normal" one who can go all night without eating, unless he's not telling me something. :)
So call me a softie - I don't care. If I get to eat at night, Rowan should be able to too. How can I say no to a face like this? 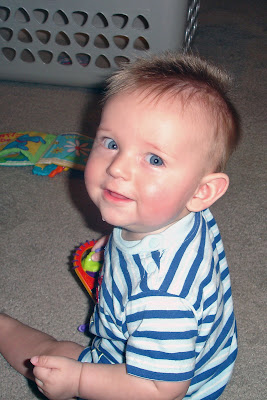 Posted by tiff snedaker at 9:22 AM

The last 2 nights my stomach has been growling before bed. I just ignore it because I already brushed my teeth.

I can't believe you are still getting up 2-3 times a night! I would be so dead exhausted! Gavin sleeps from 7pm till 7 or 8am and I'm still tired1 :)

Yeah, you're better than me. Eli was only once a night at that age and it killed us. If he cried beyond that, he was on his own (but he usually didn't cry more than once). Haha - we're mean, I guess.

hhahah I started laughing so hard when you said that you ate them right out of the can. I do that sometimes, (well I am not pregnant) but I just crave them so bad that I just eat the whole can by myself! I am glad to find out that I am not the only one~