I love swimming - my favorite part of the summer Olympics.  It could be because I swam on swim teams when I was younger and competitively in Jr. High and 2 years of High School.  I excelled in the 100 m breaststroke and even qualified to swim at state my sophomore year.  Good times.
We've been recording much of the Olympics (thanks to my best friend DVR) and I've been watching every single swimming race.
So what about Michael Phelps?  His 100 m butterfly was pretty much amazing and the closest race I've ever seen. I was ready to jump off my couch and cheer for him but somehow I don't think he would have heard me... 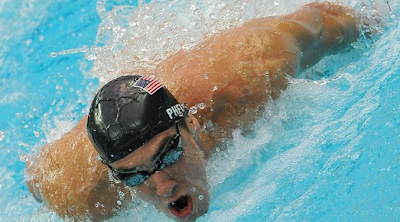 After winning his 8th gold medal tonight I am in awe of just how incredible he is.  He's such a great athlete and so fun to watch.  We were watching a special with him the other night and I had to laugh at his "diet."  He is supposed to eat between 8,000 - 10,000 calories a day because he works out so much.  You think it'd be good carbs and tons of lean protein right?....so I was surprised to see his regimen of sausage and chocolate chip pancakes in the morning.  And he's a huge fan of eating out, he doesn't cook at all.  Funny to get an inside glimpse of an athlete's daily life.
And his mom  - gotta love her!  So it's official, I think I am in the Michael Phelps fan club - anyone want to join me?
Posted by tiff snedaker at 11:48 PM

His mom reminds us of the mom from 'Everybody Loves Raymond'. Ha. He sure is entertaining, but I think my favorite swimmers are Lezak and Lochte. For some reason I feel like Phelps comes off as a bit arrogant. We've been watching all the swimming though too. And gymnastics! This is my first year that I've really been into it.

Huge Phelps fan. We have watched TONS AND TONS of Swimming and Olympics. I was totally going to blog about this! I got a kick out of his eating out diner food with chinese and all that crap. Oh to be able to pack away food like that! I didn't think he was arrogant at all. He was always very nice and gracious to his competitors, was not talking rude about anyone. He trained very, very hard, so I am so excited for him. It has really renewed Moura's enthusiasm for swim team again.

I would love to do the fly like Michael Phelps. We are big swim fans here. As you know my kids live in the pool. It has kind of inspired me to take lessons this Fall and learn how to breather in the water. I suck at that.

BTW, cute pics of the boys. I am just getting caught up on things!

I love Phelps also and have been awed by watching him make olympic history. I remember how it was with Mark Spitz. I don't think he is arrogant. I think it is hard to be in the spotlight. He has worked very hard to be where he is. It was cute to watch Maeli in the pool at the hotel last night. Working on her breathing and flip turns. We had just finished watching Phelp win his 8th gold metal. Yes it was surprising to see what he eats.

I have always been impressed with Phelps' swimming abilities (this is his 3rd Olympics) but for a long time I thought he was arrogant also. (I think he was more back in his first Olympics) But, I saw an interview with him tonight, and he seemed really down to Earth and normal. They even said that he was diagnosed with ADHD when he was a kid, and that swimming was a perfect way for him to get his energy how without driving people crazy!!

Yeah, I think I have a little crush on him. I fast forward through most of the other events, and I always hit play when it shows him. He's amazing!

He is amazing. I haven't watch a lot but have dvr'd some of it & have caught bits & pieces. I hear most of it on the news on my hour commute in. :) How would it be to have that type of diet???

Oh, I totally fell off the couch during that 100m breaststroke... most exciting race ever! The relay was awesome too.

I've caught bits and pieces of the Olympics at chow and when we go into the office areas (those guys always have a TV on). Mostly I've seen the boat races and I think I only saw one swimming event, which was a relay and only the last few moments of it.

So this comment is a bit late, but I have to take back what I said. The reason I thought he was arrogant was because on his 7th (?) race he got gold and just threw his goggles to the side and didn't even smile like it was no big deal. I'm like what a jerk! Then I come to find out he was pissed because his goggles filled up with water and he was swimming blind that last lap.
I guess there is always a story. My bad...