I was doing some dejunking and found Marshall's old camera from his mission. It's a 35mm and I figured we would just send it to the DI. The boys discovered it worked and had a flash so they started taking pictures with it. I pulled out another digital camera we haven't used for a while and let Rowan play with that one. The boys have been having fun taking pictures. I thought it was funny because Chandler took a bunch and then was frustrated when he couldn't figure out how to view them. Oh to grow up in the digital age. His expression was funny when I told him there was film that would have to be developed at the store. For quite a while, they followed Bessie around, taking her picture. Bessie has settled in nicely here. She hid under the beds a lot the first week and seemed really apprehensive. She also pawed at our door all night one night and has finally learned that she doesn't do that at night which is nice. She is really loving and patient with the boys. The boys are soft with her and she likes to be wherever we are. So here is our kitty paparazzi, cute yes? 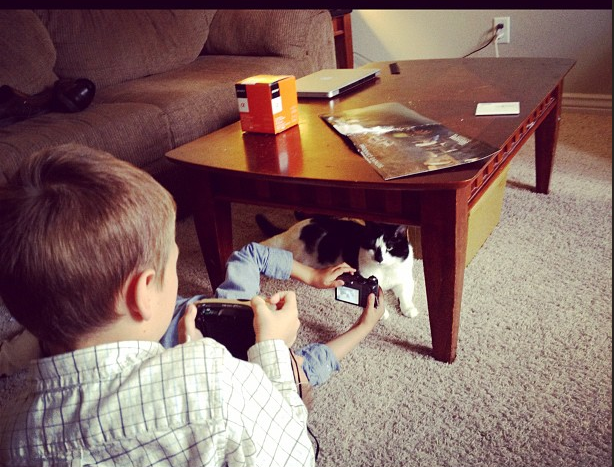