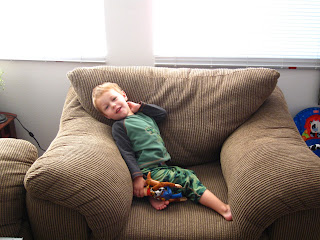 Last night Marshall dropped me off to do a pump class. We had picked up a free pizza beforehand and he was going to go home and feed Chandler. Chan hadn't had a nap yesterday so he fell asleep in the car. I guess when they went home Chandler was way out of it. They got up to the apartment and Marsh offered him some pizza. Chan really doesn't like pizza, weird kid, but decided he wanted some Cinnamon Toast Crunch. I hadn't had the chance to go to the grocery store so we didn't have any milk. Marshall decided to improvise and put water....yes WATER in his cereal. Talk about nasty. Chandler took one bite and threw a fit. I don't blame him, I think I would have too. He kept yelling, "I want milk! I want milk!" I guess he ended up being hungry enough that he ate 2 bowls of water cereal. Pretty disgusting if you ask me. Guess we need to venture out to get some milk today....lol.
Posted by tiff snedaker at 8:14 AM

Hilarious! I think I tried the water thing once when I was a little girl. It definitely isn't milk!

What?? No milk? last time I was there you had so many you were trying to give me a gallon! Water and Cereal= NASTY!