People In My Neighborhood 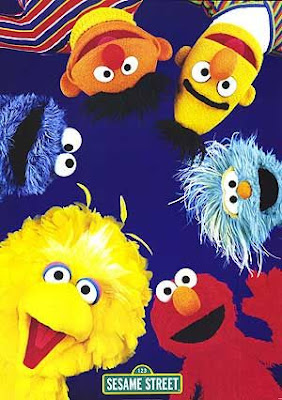 Marshall and I became quickly acquainted with a person in our neighborhood. There is a park right across the street from where we live and we've gone there just about every day to let Chandler burn off some energy. One day there happened to be a little girl who looked about Chandler's age. She came up to Marshall and I and started talking to us. Marsh asked her name and we couldn't quite get it - it sounded like Bethany or Stephanie but we weren't sure. As she ran off, I looked around to see who her parents were. She ran up to a man who I would guess to be in his mid 40's. He was wearing a faded maroon tank top which exposed way to much chest, arm and shoulder hair for my liking, shorts with a big hole, a hat, pop bottle glasses, and no teeth. Looked a little scary right off. I was a big taken back when I first heard him speak as his voice is a little high and nasaly - not to mention he talks funny because he has no teeth.
"Don't bite the boys, ok?" he said to her.
There was one other boy playing that evening too - about 2 years old. The little girl smiled and ran away. Throughout the rest of the time we were there she targeted this other little boy and hugged him over and over until he started crying and his mom had to pull the little girl off. Her dad did nothing, just sat and watched and smiled.
He informed us that she either hugs or bites everyone she meets.
The next day we came to the park, the little girl and her dad were there again. Marshall had some conversation with this guy that I later heard about. I guess he's unemployed right now and was telling Marsh he was waiting for the Union to call him. Marsh told him about the new job he was starting and his reply was, "Oh - one of those buildings with air conditioning." (As if he spends his days at the hot park and never goes into an air conditioned building) Might I mention he was wearing the same clothes as last time we saw him and his little girl had snarly hair and clothes that were too small for her.
Fast forward to the next day. We see him at the park again, and he tells the little girl:
"There's your boyfriend, go get him!" (pointing to Chandler)
It's hard to take this man seriously with the sound of his voice and sometimes I want to burst out laughing but have to look away not to.
A few minutes later he yells, "Tiffany, come here!"
How ironic - his daughter's name is Tiffany.
Little Tiffany runs over to the swing and Marshall is already at the swings pushing Chandler. This man comes over to push his daughter and strikes up a random conversation with me.
"Her birthday is in August."

"She was almost born on my birthday - it's August 15th and she was born on the 17th. You know I also have two sons whose birthdays are in May. Would you like to know what days?"

He goes on to tell me about his son's birthdays. Can you get any more random? Oh, and guess what he's wearing today? ............Yep - the maroon tank top and shorts with holes.

After our little conversation is finished, he starts singing "5 little Monkeys jumping on the bed" to little Tiffany. All the while he is shoving her so hard in the swing I'm surprised she hasn't fallen out yet.

On the bench next to Marshall and me is a Dr. Pepper bottle that has a few swallows left in it. The little girl runs up, grabs the bottle and takes it over to her dad.

He then proceeds to open it up for her and let her finish drinking it. Wow. That did it for me. I didn't know whether to laugh or just gawk at them. Just after that, 3 kids aged 8-10 ran up to this man and were all excited to see him. I think they called him Ray or Roy, didn't quite get his name. How he knows these kids, I have no idea. Maybe they were his, or just more people in our neighborhood....

WoW! that is a little crazy. I wonder if those are the only clothes that he owns? Do you like your ward??

Ah that made me laugh, you're good at telling stories.

wow that is amazing. don't know if it is funny or scary.

Don't you wish you could test drive neighborhoods before you move in? Sounds like you've got some interesting neighbors around there.

Do you think he's like homeless or something? Sounds like they are pretty desperate for food/drink if they are picking up random half finished drinks in the park. Sounds like a good opportunity to provide service.

uh scary, keep a good eye on your kids!

Okay, the first thought in my mind as I read was how sad this story is. It makes me want to cry. You should take a picnic lunch with you next time and make them each a sandwich too. That is a hard life for anyone, especially a little girl

The SECOND thought that popped into my head was "what if the little girl isn't his"? Seriously, I may watch too many America's Most Wanted episodes or something, but reading this reminded me of so many of the stories they tell about criminals finally getting caught with the children they kidnapped living in situations like the one you explained. (Because the are on the run, they have to hide and all.)


Sad and creepy all at once. (quiver)

Poor guy! I know we have to be careful and everything, but maybe he is just hard on luck right now. Maybe I'm too innocent, but maybe you will have an impact on him just by talking to him a little.
We can't change the world in one day, but we can change the mood of someone we run in to.

It is amazing the different people that cross our paths throughout life. He was put into your life at that exact moment to teach you something. Even though he doesn't have much it sounds like he loves his daughter & that they are happy.