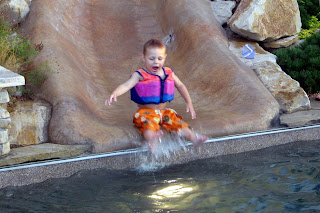 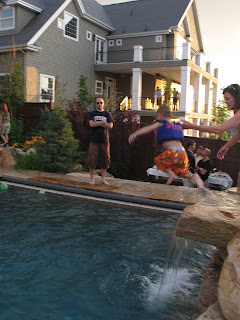 This last weekend we had the Lewis reunion - my grandma Nielson's family. Anyways, it is an all weekend deal and on Friday night we went up to my dad's cousins house in Draper. They live in this beautiful big house right across from the Draper Temple. They had a really cool pool with a slide and waterfall. We brought Chandler's swimming suit but didn't bring Marshall's or mine as we didn't know how badly we wanted to go swimming. As soon as Chan saw the pool he wanted to get in. He wanted to go down the slide but Marshall and I felt nervous about the whole thing since it was 8 feet at the deep end. My cousin Brook and her hubby David took turns catching him but soon they were ready to get out of the pool. We found an extra little life vest and put it on to give us peace of mind. Before we knew it, Chandler was more independent than ever. He didn't want anyone to touch him and was going down the slide and off the waterfall by himself. I don't know any two year old who will jump off into a pool by themselves, go underwater, and be happy about it. He would then dog paddle over to the side and wait for someone to get him out so he could go again. I forgot my camera but Brook was gracious enough to get some video footage and a few pics. Thanks Brook! It was hard to pry him out after we'd been there over three hours. The next morning when I changed his diaper, it was fuller than any diaper he's ever had in the morning. Guess he swallowed half the pool too. And yes, we have now invested in our own life vest for Chan.

Posted by tiff snedaker at 7:39 AM

Your blog is very cute! I love your header. Thanks for having us over today. It was fun to get to know you more and let the boys play. We'll have to do it again soon. You have such a cute little family.

Cute little guy! Brynlee loves the water too! Hope you guys are doing good! I love scentsy too by the way!

haha that is pretty funny! Can you blame him? i would have loved to have a slide like that to play on. My youngest brother is like that too. just loves the water and always wants to go swimming. nice videos.

That slide is awesome. Deano is the same way. Our community has a pool with 2 water slides. We also hesitated letting him slide (even on the smaller one) until recently. But he loves it so much that I finally started letting him do the giant one too. He is a freak about it and all the lifeguards think it's hilarious that a two-year-old is addicted to that slide when a lot of the 12-year-olds are still scared of it.

Definitely your son, thats for sure! He is quite the swimmer! Thank goodness for life jackets, huh?

That is too cute! He must take after his mom in the swimming departmenet!!I'm jealous, I want a pool like that!!!