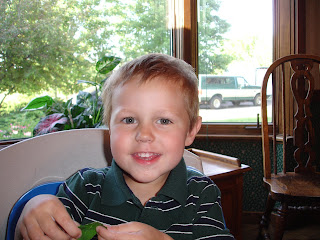 I think we are starting to get into the interesting stage where Chandler does things and even he doesn't know why he does them.  For example, the other night we were packing and Chan was running around in the yard.  All of a sudden I couldn't find him.  I went looking for him and he was in the backyard, squatting down with his shirt over his knees trying to walk.  I remember doing this as a child but wonder where Chandler got the idea - he's only 2 1/2?    Then today we went into Rigby to run a few errands.  At one point Marshall was pumping gas and Chandler was screaming "Color!" as he saw a pen I had just put into my purse.  Being that I was still tired from working the past two nights and not thinking straight, I handed him the pen and an ATM receipt to color on.  I looked back a few minutes later to see this artwork he'd done on his legs.  Ugh.  Then he started yelling "Ouch! oohhh- Ouch!"  I look back again and he's biting himself on the knee repeatedly.  Who is this little boy? 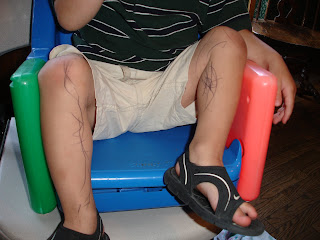 We are all packed up and ready to leave in the morning and I'm really excited!  It was bittersweet to leave work this morning as I've made so many good friends up there.
So here I sit, knowing that I should have gone to bed an hour ago, but instead I've been catching up on blogs and popping swedish fish one after the other. (after eating a couple of your fish last night, I was craving them today Melody :) ).....ah dang - the candy's gone, guess I will go to bed.
I'll check in once we're settled in our apartment and have our internet hooked up!
Posted by tiff snedaker at 11:36 PM

He's an artist! Don't stunt his artistic growth. ;-) Totally kidding- keep the pens away from him! He is so cute, and getting so big.

Happy moving day- hope everything went well and your internet gets hooked up QUICKLY. Hey, we might come up to SLC in a month or two, maybe we can actually hang out. It has been too long.

What a weirdo. Kids do strange things. Logan was biting himself on the arm one day in church (he's not even a biter) and he had these deep teeth marks in his arm. He thought it was neat.

How exciting to finally be packed up and moving! Good luck with the move. Hey, at least Chandler didn't color on the car interior!

Hi you guys! long time no see! i was surfing thru blogs and saw your name. What's new? :)

Good luck on your move! What an exciting time. Update as soon as you can. :o)

Well travel safely, I am sad to see you guys go. Good thing you have a blog so we can stay in touch.

Good luck you guys! And yeah... I get my room back! It will be kind of a bummer to have the house empty. Not sure what I will do by myself for so long. I know how it was to have hardly anyone around when I first got home. Hope everything goes well.

Good luck Tiffany! I'm definitely going to miss you. It stinks that we didn't get to work all that much together. I can't believe you guys are leaving, I just found out the other day. Good luck with the new area and job, and with the boys! Thanks for being so great, I've loved working with you and getting to know you.

So I wish I could have spent a little more time visiting Sunday night before you left...but just so you know, we'll all miss you!

Hope all is well with you settling in to your new home. We might be down there next week for Jeff to interview with a landscape company. We're still waiting to hear back on when...
I already paid for your order so it could get sent off.

Getting an early start, eh? It's true, I've caught my kids doing this very same thing . . . makes me wonder why they think it so funny and entertaining. Weird. Anyway, congratulations on your move and job and stuff!