A trip with many "firsts" 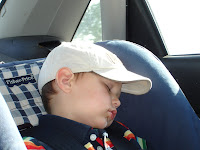 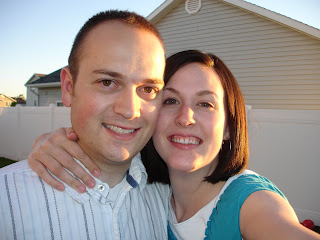 As mentioned in the previous post we took a trip down to Utah Monday & Tuesday for a job interview. It was a trip that held many "firsts" for us. On our way down, our little Ford Focus hit 100,000 miles. Marshall and I were all excited to watch it turn but I was on the phone with my sister when it happened and we didn't even realize until we were 6 miles over. I guess you could say it's the first and only time the car will hit 100,000 miles, but it was still a first, right? 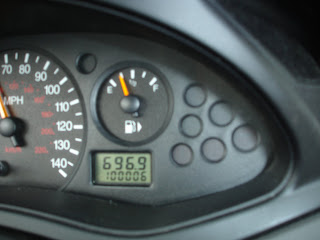 We stayed with Avry and got down there at about 7:30. It was a BEAUTIFUL evening, and really the first night that we have really enjoyed an evening outside this summer. Justin grilled porkchops so we ate and played outside for a while. 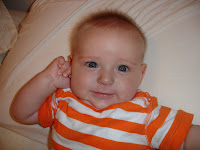 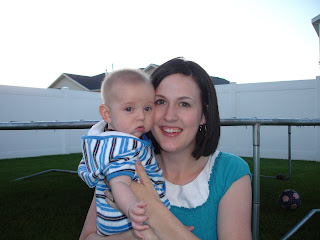 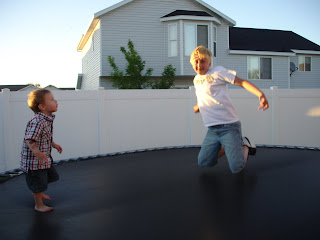 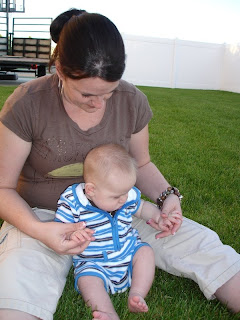 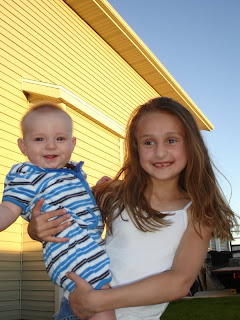 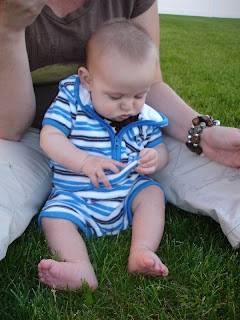 Rowan discovering grass for the first time
On Tuesday we headed down to Lehi for Marshall's job interview.  We didn't realize Thanksgiving Point was in Lehi until we got there and I noticed that they had a dinosaur museum.  I planned on taking Chandler to the museum while Marshall was interviewing.  When we got there and realized it would be $18 for just Chandler and I to go we decided to walk around instead.  We found a little farm that they have there and it was much cheaper to get in.  I think Chandler enjoyed it just as much. 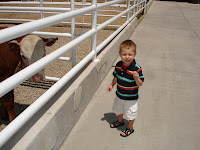 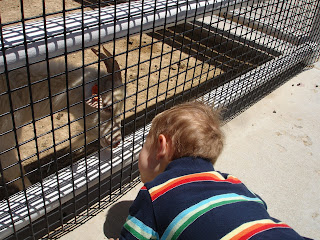 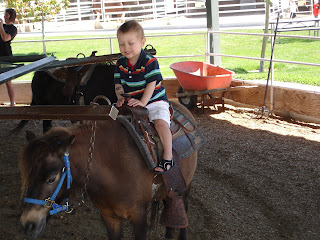 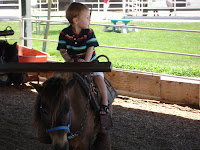 They had different farm animals and he especially loved the cows.  I don't know why it is a favorite of his.  The other night I told Chan he smelled like a cow because he had a dirty diaper.  He started mooing which was pretty funny.  Chandler also got to go on a pony ride while he was there - it was his first time on a horse, (or I guess a pony since it was only about 3 feet off the ground)  He loved it!  I tried to get a video but it's super fuzzy so don't run and get your glasses, it's our camera.

On our way home we stopped to get dinner and I noticed a Krispy Kreme down the road.  I've never actually been to one so Marshall sweetly complied to take me there to get a doughnut.  One word to explain the hot ones they give you when you walk in: Heaven.  It was amazing and pretty much made my day, lol.  My first fresh Krispy Kreme, and it will NOT be my last, lol.
So it was a great trip full of firsts.....which I'm sure will not be lasts - as we are exploring our next "first" by moving down there!  Marshall was extended a job offer today and took it!  We are so excited and are looking for a place as he is supposed to start work on the 30th.  We are thinking we will rent for 6 months or so and then look for a house in the area.  Marshall is really impressed with the company, C.H. Robinson. The job has wonderful benefits and Marsh is really excited to start. They are flying him out to Minneapolis for 2 weeks to their headquarters to do a training. We feel so blessed and are excited to be in the Salt Lake area as I have a brother and sister down there & Marshall has extended family as well. It feels nice to finally know what we will be doing and where we will be going.  (So Matt & Shannon - does this mean we beat you out of the ward?)

Posted by tiff snedaker at 2:32 PM

Yes, YOU WIN!!!!! And we could not be more excited for you! Congratulations, Marshall! I actually clapped when I read the news - good thing no one is here - then again, I'm now telling everyone who reads your comments! lol I guess I better go bake that cake I promised!

Congrats!!! That's so exciting! Utah is such a fun place to live in and still close enough to come back and visit!

That is great news Tiff! I am glad that Marshall finally has found a job. I know all too well that stress.. Woohoo! that means you get to move out of mom and dad's soon. Do you think you will look for a place near Avry?

Am um Krispy Kreme. YUM YUM. Looking forward to having some in a few weeks. Yum, yum.

It was great seeing you guys! I am excited for you to be down here.

Congrats Tiff and welcome to Utah!

CONGRATULATIONS!! Yeah, the search is over for you. We'll miss you tons, but the bright side is Jeff might be transferring down there too..we will have to see what happens. If you need help with anything let me know.

Congratulations! We're sad to see you go, but happy you get to move on, and we'll keep in touch through blogs. :)

Hey there! Congratulations on the job! You guys have a cute little family. It was fun to hear what you are up to. I will have to fill Jon in. If you want to check us out our blog is--
www.jonhancockfamily.blogspot.com

wow congratulations!! it is exciting to know that college doesn't go on forever. Good Luck.

YEAH! Congratulations guys! I'm so happy for you!

You will love it down in
Utah! Congrats, but wait...what about us? your'e leaving us? you can't. jk, life always moves on and we are excited for you. Good Luck. ps Cute pics of your kids as usual!

Just in time for my to get my room back. Now I have more people to visit down there

Yay, congratulations! I got so excited when I read the good news. I'm sure you both feel so relieved. You'll have to dive into some more Krispy Kreme joints while you are there! Oh, and I love watching babies when they see grass for the first time- so cute!

Congrats Marshall and Tiffany! Sad that you will be moving, but it is a must!

Congrats on the job!! Nice to move somewhere a little warmer than here!! Krispy Kreme's are the best things EVER!!! ha ha

That picture of Rowan on her hip is so cute. His smile is adorable.

Wow, Tiff that is great news!!
It will be fun to move down to utah! you'll like it!