Marshall took Chandler & Rowan to the stampede parade in Rigby today.  I stayed home to sleep as I worked last night.  Marsh brought Rowan home after the parade to me and took Chandler over to his parent's house.  He then went golfing with his brother and dad.  Rowan wouldn't nap when Marsh brought him home, so I fed him and got on the computer so I could upload some pictures from our camera.  I couldn't find our camera so I called Marsh to ask him where it was at.  He acted really funny about it but said he had taken it with him and it was in the diaper bag at his parent's house.  After trying to get Rowan asleep for a while again, I finally decided just to go over to my in-laws and hang out there.  I got there and went looking for the camera.  When I turned it on, I got that bottomless pit feeling in my stomach.  The LCD screen was a combination of black and white and the picture resembled shattered glass.  This camera has been pretty dependable.  We got it a little over two years ago and paid about $250 for it.  I took a bunch of pictures in hopes that it would still somewhat work.  When we got home, I plugged it in and found that it still takes pictures, I just can't view the screen.  This also means that I can't change the pixels, the mode, delete pictures, etc.  We really can't justify getting a new camera right now as we have to buy a washer and dryer for our apartment in Lehi and will probably be getting a new tv when we move down there.  Plus there's moving expenses, first month's rent - you get the idea.  I'm just mad but guess I should be glad it still works at all.

In trying to figure out what happened I thought back to when I posted last Wednesday.  I left the camera on the couch and it fell in between the cushions.  That next day when we went to use the recliner on the couch, we heard a horrible grinding sound.  I looked under it and found a VHS copy of  Tarzan that had essentially been beheaded. 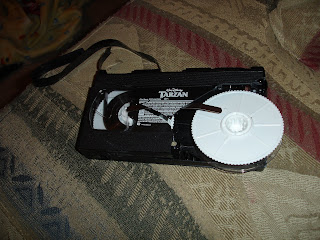 I'm guessing since the camera was there it took a beating too.  I guess I'm glad it still works.  I just have to look through the tiny view finder like it's a 35 mm camera.   Guess we'll put a new camera on our  "wish list"
Posted by tiff snedaker at 6:01 PM

Hey if Tarzan is a favorite of Chandlers, my husband says he can fix it. HE would need a screwdriver and a blank vhs tape.

That sucks about your camera! I'm so sorry! Hey, I've got a few recommendations once you decide to get a new one... I'm kindof a camera geek, you know.

Didn't you just get a new camera Tiff??

If you go on e-bay you might be able to find a replacement LCD. I replaced the LCD on my PSP when I cracked it. The parts were so small that it was quite possibly the most nerve wracking thing I ever did, but I saved $150. It wasn't hard, just the parts were really small.