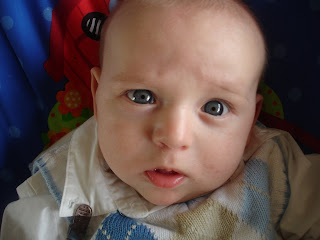 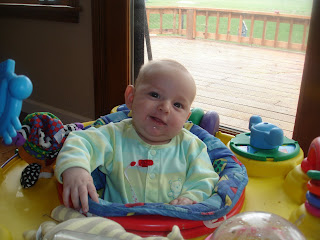 Seemed like we did quite a bit this weekend, or so it seems when I look back at the pictures. Rowan has started sitting in the exersaucer and likes it quite a bit - I think because he can look around.
Chandler also likes sitting in it, although he is a little to big. He loves the baby toys - thinks they are new toys for him. 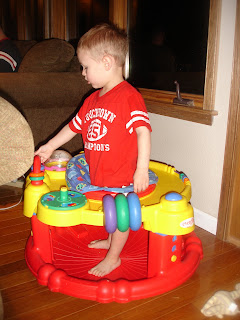 Saturday we took Chandler to the Riot Zone to play on the inflatable toys. When we bought Chandler's wristband the girl told us the toys we "A little wet" due to the weather we'd been having. A little wet was an understatement. We were only there 45 minutes and Chandler was soaked before we left. 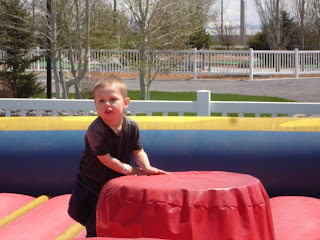 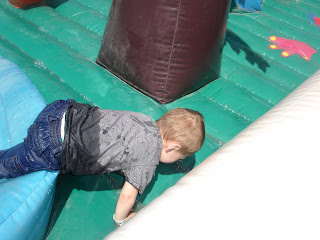 You'd think they'd build some sort of shelter over them to help them last longer and not get weathered and wet.  He was a pretty happy boy but we had to strip him down to get him in the car. 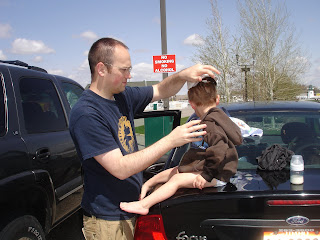 I was supposed to work all weekend and on Saturday realized Rowan hadn't had a bottle for 3 weeks.  Marsh & I fought him all day to try to take one and he wouldn't.  We went out and bought some rice cereal to see if he would eat that.  He did pretty well with it so we figured Marsh would give him cereal once while I was gone and then bring him up at the hospital at midnight to have me feed him.  Well at about 11:30 a very triumphant Marshall called me and told me he got Rowan to take a bottle.  He's been on a pacifier strike as well because he is teething.  Marshall said he finally got him to take his pacifier and then switched it out for the bottle and he drank the whole thing.  Yay!  Speaking of the teething - his bottom two teeth popped through yesterday.  He's not even 4 months!  Seems a little early to me.  I tried to get a good picture of them but I couldn't so maybe I will soon. 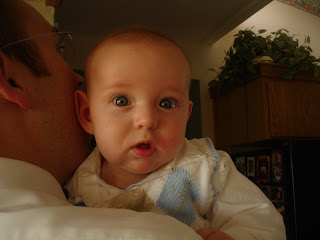 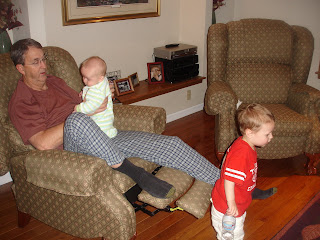 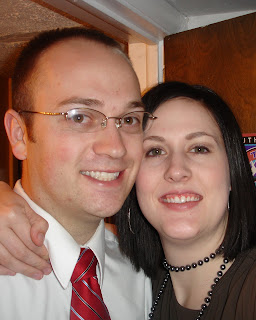 Mother's day was nice.  I got a refurbished 2G Zen MP3 player  that hasn't come yet.  Marshall also got me a card, a $15 itunes gift card and some WONDERFUL Lindt chocolate :)  Chandler made me a crown in nursery and I wanted to cry when he gave it to me as it is the first of many little crafts he will make growing up I'm sure. 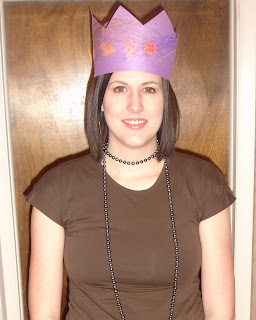 When I went to put it on though Chandler threw a fit and just kept saying, "No!  Don't!"  There was this cute poem to go with it too. 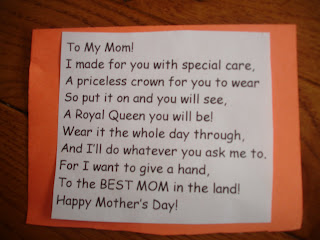 I got put on call last night so I didn't have to go into work.  Nice.  I also just wanted to tell my mom Happy Mother's Day!  I have a great mom who does so much for me!  I also have a wonderful MIL!  Happy Mother's Day to both of you.
Posted by tiff snedaker at 11:09 AM

That second picture of Rowan is so cute! It looks like he is saying " what's up or howu doing?" The video of Chandler was so funny! It must have just hit my funny bone or something because I was cracking up through the whole thing, what a funny kid. Thanks for the entertainment!

Weren't the crowns awesome! Carson was so proud of it and insisted I wear it most of the night. I had contractions 6 min apart for like an hour last night but then they stopped. I was wishing to go into labor...but you wouldn't have been at work anyway! Lets do a playdate this week.

So cute! Tiff your boys are adorable!

teeth at 4 months. Sounds like Moura at that age. Yep. Sounds like the Nielson genes. Start saving for the orthodontics sister! ;-)

Love the crown and the picture of Dad with Rowan.

Rowan looks so big!
I really like your hair color, it's close to what mine used to be.

Teeth at 4 months, sounds like both my girls, so I guess it is the Nielson genes.

Wow, Rowan IS getting so big! And 2 teeth already? Wow! Zander just had 4 teeth come in all at once.

Oh my gosh that first picture of Rowan looks just like Marshall! I forgot about that exersaucer! It brought back memories seeing it. Looks like a fun busy weekend!

Holly Mayer told me yesterday that Rowan had two teeth!! Oh man! I'm sure Mady is teething, but nothing yet..I think she will be for a while..loved the pictures too!

That crown was so cute! i love when they bring pics home. Nate sang in sacrament with the primary for the first time on sunday and we were so excited about it! I'm SOOOOOOO excited to see Twilight! I loved the trailer! I do know Katie Dalling she sold stuff in the store! i was going to take the boys to riot zone, I'll remember to not go after any rain!

your hair is dark.. did i miss something. it looks great. sounds like you had a great weekend.,

Teeth already!?!?! I am still waiting on Eli's. Not even a sign that he will get them soon - no swelling, fussing or excessive drooling. Hmmm....

Dean didn't get his first teeth until 7 mos. I guess I have late teeth-bloomers.

Yuck, you're a lot better mom than I am. I probably wouldn't have let Logan play there at all. I guess I have a problem with letting my kid get dirty. I saw a little girl (9 months or so?) at the playground and she had just plopped down in the sand and was digging her feet into it. I was feeling anxiety just watching her!