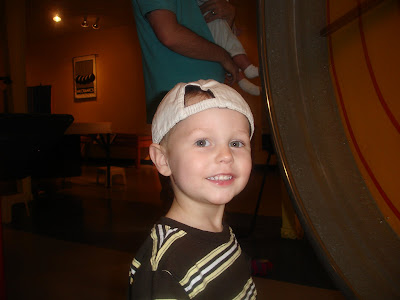 Marshall ended up getting  a few job interviews in Boise this week.  I didn't want to stay home with the kids by myself, so we decided to make a trip of it.  We went over Wednesday, stayed 2 nights and came home Friday because I had to work.  I got put on call tonight so I probably won't have to go into work at all unless it gets really busy.  It was fun to get away for a few days even if it was only to Boise.  We headed out at about 9 am on Wednesday.  I had to give Chan some medicine before we went as it seems like is getting another cold, but I half wonder if he has allergies?  Sometimes he will rub his eyes and say "Ouch, eyes!"  He has also been really congested and has a dry cough.  I think I may call the ped's office this week and try to get him in.  Anyways -  we got over halfway and decided to stop in Twin Falls to get lunch.  We decided to just stop at a grocery store to get some things and I stayed in the car for a bit to feed Rowan while Marshall took Chandler inside.  When Rowan was done eating, he decided to throw up half of it on me.  It wasn't just a little spit up, as I had to completely change my shirt and he was covered in it as well.  The rest of us ate and then we decided to get on the road again.  Chandler didn't eat a whole lot but we figured maybe he would eat more as we got going again.  I offered Chandler some ice cream once we were on the freeway.  He just held it but wouldn't eat it.  His face started getting pale and I took the ice cream away from him.  Less than a minute later, he threw up everywhere.  We were about 10 minutes from another exit so I started cleaning it up as best I could.  I was gagging the whole time  - I guess you could say I have a pretty weak stomach :(  I had to stop as I didn't want to contribute my lunch too.  It's one of those "mom duties"  that I knew I would always dread. Cleaning up after your kids when they get sick - blech!   We stopped at a Subway in Wendell and I changed Chandler while Marshall cleaned out the seat as best he could.  On the road again we went.  A half hour later we realized we were low on gas and had to stop again.  We finally made it to Boise after 3 stops and 5  1/2 hours.
We had made plans to go to the Discovery Museum of Idaho .  It is a math/science hands on museum and was really very interesting.  It was not only geared towards kids but adults as well.

Chandler on a bed of nails.
We spent a couple of hours there and headed to our hotel.  We got checked in and decided to venture out to find dinner.  We don't know our way around Boise very well so after about an hour of wandering/driving around we found the mall.  We got some dinner and decided to try to find me a swim suit as our hotel had a pool and I didn't have a swimsuit that fit.  I'm still about 8 lbs from my pre-preggo weight, (I wasn't going to get a new swimsuit until I reached my goal weight) but I decided to look for one anyway.  Any woman who has had a baby knows that your body is NEVER the same after having a baby.  I must have tried on 10 different swimsuits and didn't really like any of them.  Marshall was really patient with the boys and trying to make me feel good about some of the suits I tried on but I eventually just got frustrated and the mall was closing.  I did find one I liked but couldn't justify spending $70 on a swimsuit.  We finally headed over to good old Walmart and I found a swimsuit that would do.  Then back to the hotel to sleep.
Thursday we went swimming in the morning and then headed downtown to drop Marshall off for his 2 interviews.  One was with Balihoo  and the other was with Stratus.  The Stratus interview was more a networking one.  Marshall met the CEO of the company while at AAF competition on Portland.   The Balihoo one was for an actual position - he is supposed to hear back on that one by next Friday.  While Marshall was interviewing, I took the boys to ZooBoise.  I expected the Zoo to be bigger than what it is - seemed to be about the same size as Tautphus Park in Idaho Falls.  They did have a few fun hands on things for kids, like animals they could climb on, a few different slides, and a carousel. Chandler's favorite exhibit was the penguins and thankfully Rowan slept the whole time we were there.

.
We went swimming again that night and Chandler LOVED it. 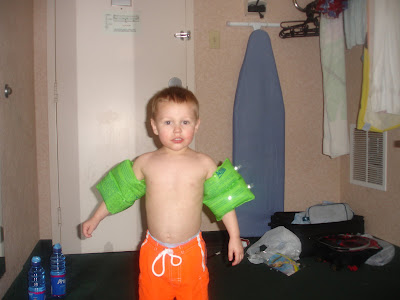 We stayed at the Holiday Inn as we got a really good rate on the room.  We actually got the room through Hotwire for $39 a night plus tax.  The bad thing about hotwire - you don't know what hotel you have booked until it's all said an done.  It was a nice hotel though and definitely worth it - just under $100 for 2 nights.
Our trip home today was a little less eventful than the trip there. We made good time and only had to stop once.   I decided I really wouldn't mind living in Boise but then again I'm not too picky at this point!  I keep telling Marshall he needs to post about how they did at their competition on Portland last week but he hasn't done it yet.  Hopefully soon.
Posted by tiff snedaker at 11:08 PM

Looks like you guys had a good family trip! Sorry both boys threw up on the way over that bites. Neither of my kids have thrown up in probably 4 years or so. (knock on wood) but I remember those days (ugh)
How did Marshall's interviews go?

oh by the way I LOVE how Chandler wears his hat backwards tooo stinkin cute!

Sounds like a fun trip...well except for the throwing up part! Let me know if you guys are free anytime this week and maybe we can go do something.

We went to Boise on Saturday and Sunday! We also went to the zoo with Macy and she loved it. It's always nice to take a little trip, but lots of work for us moms huh?

Other than the throw up I bet Chandler had a blast doing all those activities. I know Logan would love doing stuff like that.

Wow, that is quite the trip! That will be a memory for years to come, I'm sure. Chandler was so still on that bed of nails! That was neat though. Maybe he'll get into a career in science, as it seems like it really interests him right now.

I am totally the same way with barf that you are Tiffany. When Ashley was morning sick with Jack I would almost throw up because she was. It sounds like you guys had a good trip. Hopefully one of Marshall's interviews pans out.
JC McDee