One of my best buddies Camille introduced me to slickdeals a few years ago, and I must say, I'm addicted. I don't know how much $$ I have saved using this site. Diapers, clothes, toys, services...you name it, we've saved on it. I was especially excited about our slickdeal that we got today. Marshall and I got cheaper Samsung cell phones when we renewed our contract in July 06. They work pretty well but we decided we wanted to upgrade about 4 months ago. We bought Motorola RAZR's off ebay and I've never had such a crappy phone in my life. I had it all of 3 weeks before Chandler threw it on the floor ONCE and it broke. Cheap. Anyways, Marshall hasn't ever dropped his and it has bit the dust too. It takes all night to charge, he makes one phone call, and then the phone is dead again. The cover is cracked and the reception is horrible, he doesn't get his calls half the time. I also had major problems with a Motorola phone I had 4 years ago that we bought from t-mobile. I don't think we will be buying any more Motorola phones, we just haven't had good luck with them. So we have the Samsung phones that are still working but our SIL Natalie's RAZR bit the dust too so we gave her the older phone I was using. I am currently using Marshall's old Samsung that is held together by a piece of packaging tape. Pretty sad. So I started shopping around for new phones as we really need them. To upgrade phones for existing customers, it is ridiculously expensive. You only save maybe 20% off the original price and that's if you sign a 2 year contract. I found a killer deal in a slickdeal forum today for cell phones with tmobile. We were able to get two new blackberry pearls by adding 2 lines to our shared family plan. 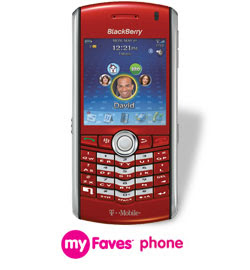 It's an additional $20 a month for the two phones plus $20 that we have to pay for data services for the first month so we can get the phone free after rebate. (Part of the rebate regulations) So basically we will pay for 4 phone lines for 3 months and then cancel our original phone lines in July as the contract will be up for those. Sure, we will have new phone numbers, but we will let all our family and friends know our new phone number so it won't be a big deal. It comes out to $40 a phone. If we were to do a normal upgrade with t-mobile signing a new 2 year contract, it would have been $240 a PIECE, coming out to $480! Slickdeals saved us $400 today and we will have cool new phones! Not bad, eh?
Posted by tiff snedaker at 5:11 PM

Sounds like a good deal. Good luck with the transition of phones & phone lines. I always HATE getting new phones- I like my comfort zone. Just make sure your 2 year old doesn't get a hold of these phones & dump it in the toilet like the IPOD. ha/ha

Now that is is a slickdeal!! 440 bucks? You've killed my record. Isn't slickdeals the best? I'm so glad I have a friend who appreciates it as much as I do. :-)

Wow! Thats a killer deal. I'll have to check out slickdeals! Hope that fabric works out for you for the nursing cover.

Sorry about your RAZR phones. I have had two (the first one I gave away as a gift to a friend in Cuba last year) over the last four years and they have never failed me. Maybe you got "seconds" off EBay. hmmm.

I've been shopping around for phones too, but my contract is going to be up so I can probably find a good deal.

good deal indeed. I am still using the old Samsung phone that belonged to Geoff - pre - mission. It still works fine. Not the most attractive, but it works, and I am like avry, I like my comfort zone also.

We LOVE slickdeals and Dealigg.com also. They usually hava a lot of the same stuff, but always great deals. I hear ya about motorolas. I too have not had great luck with them. :o(

Gotta check DealRocker too. It has over two million product offers from about 2,000 merchants. DealRocker.com offers the best combination of deals and coupons at one place. The deals and free coupons are updated regularly and span a wide range of product categories to address a variety of shopping needs.