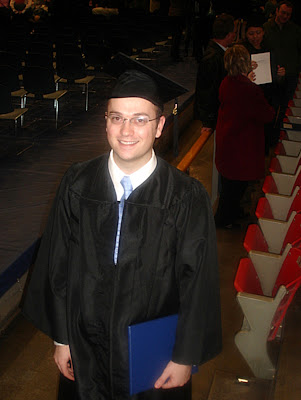 I would have posted this a few days sooner but we've all been sick at our house - with the exception of Rowan. We've had some nasty cold since Monday that have progressively gotten worse. Chandler's had a bad cough and a nasty nose. I feel almost like I have a sinus infection. Marshall is feeling better so he left the boys and me home today and went to church with my brother Geoff. Anyways, a BIG Congratulations to Marshall who can call himself a college graduate! Marshall graduated with a BA in Communications with an emphasis in Advertising and clusters in Business & Graphic Design. His convocation was on Thursday night and we almost missed it not realizing his was that night. When I graduated, everything was on the same day. The big graduation and then we all broke up into our separate colleges for our convocation. Marshall called me after he was done with his classes on Thursday and said he thought he had something he had to go to that night. I said it probably wasn't a big deal and to just come home. (This was at about 4:00) He wanted me to look at BYU-Idaho's site just to make sure. After looking, I realized his convocation was that night, lol. We did make it so he could walk in his graduation :)

We went to dinner afterwards with my parents to celebrate and then went out to lunch with Snedakers the next day to celebrate with them. Marshall was really excited as his parents got him a nice new pinstripe suit for graudation. My parents also gave him money to get some things for himself. We are so proud of Marshall! Congrats!

Congratulations Marshall! I'm so excited for you guys to move onto the next phase of life. Oh, and I'm glad you didn't miss graduation!

Congrats! I must say I felt more excited at Chris's graduation than I did at my own... was it the same for you? Sorry about the colds... Zander and I had the same thing and we are just now feeling better. Zander's actually went into his ears and caused ear infections, so watch out for that!

Hurray! Its over! It s such a relief to be done, but then "real life" sets in. Good luck in the job hunt.

Congrats, congrats! Now onto the real world...oh the joys!

A big congrats to my BIL Marshall! We are so proud of you!

Congratulations!! That is such a huge feat! Your family is so cute & I hope you are all feeling better :)

Congratulations to Marshall! It feels good to be done with a degree. Good luck on the job search.

Tiffany, Hey this is Alicia Jones(now Foster) I followed a link on Christina Maas blog and found your blog, It's exciting to see how your doing and your cute little boys. Congrats on the graduation, we graduate this coming fall, we're excited. Anyways just thought I'd say Hi.