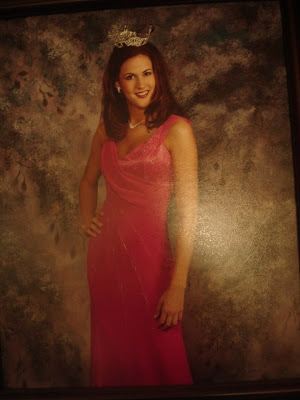 A picture of a picture -that's why I have the lovely glare on the right side.
As many of you already know, I have a history with pageants. I did Jr. Miss in high school, won Miss Idaho Falls in 2002, competed in the Miss Idaho pageant, and then also did Miss Rexburg and was a runner up there. After I did Miss Idaho Falls, lo and behold I wound up in the Wall Street Journal.     I spent my year as Miss Idaho Falls promoting  my platform "Understanding and Empowering Individuals with Disabilities"   It was a huge growing experience for me and really a lot of fun.  It is a scholarship pageant so scholarship money I won paid for my whole Junior year of college.
A year ago my mom told me about a judging seminar to get on the preferred judges list for Idaho. We went to the seminar which was very informative. I know there are quite a few people on the list so I wasn't necessarily expecting to get to judge a lot. I got a call at the first of the month from the lady who was the judge's chairman for the Miss Pocatello/Miss Eastern Idaho pageant. She said she had someone recommend me to judge. I was flattered as I don't think she realized even though I was VERY familiar with pageant scene, I was a novice judge. There were 5 of us judging, 3 women & 2 men. They have a celebrity judge now as the fifth judge who is someone who is well known in the area but isn't necessarily qualified to judge a pageant. Liza Raley from KLCE was the celebrity judge. She was hilarious and really fun to be around. The other judges were great as well. Although there were only 7 girls, I was really impressed when we began the interviews. Most of the girls were really smart and witty. Marshall was a great trooper to come with me and bring Rowan. I didn't think I could go a 8-9 hour stretch without feeding him so they came along. Marshall had pulled an all nighter the night before trying to get their AAF campaign done so by the time we got home Saturday night, he hadn't slept in 2 days. Poor guy. I think he is recovering though.  They took us out for dinner before the pageant started and Miss Idaho was there as she attends all the local pageants and performs her talent.  It was fun to talk to her about her experience at Miss America.
At the end of the night one judge was making the comment on how fun she thought judging was and that it can get addicting. I totally agreed. I loved being on the other side where I got to help choose the winner instead of being the one who was judged.  Here are a couple more pictures of my pageant days....

With my mom and dad after Miss Idaho Falls

I was just a "little" surprised when I won, alas the tear streaked face

Being interviewed by the news
Posted by tiff snedaker at 1:03 PM

ahh I remember those days! What fun watching you go through that was. Glad the judging went so well and that you enjoyed it! Maybe now that you are in the loop they will be contacting you more. :)

check you out.. on a billboard you go girl. i would have never won in hawaii, they want a hawaiian winning not a white-ie! you look great.

so, you might not know who i am, but i check your blog every once in a while from natalie's. we were friends in college, and you and marshall were in our ward. my sister and i just attended a miss idaho judging seminar. that's so funny that i got on and read your's today. I hope that we get called to judge too!

What a nice stroll down memory lane. That is cool that you got to do some judging. And like Avry said, hopefully this will get you more judging jobs.

Oh the good old days... can you even remember what it felt like to get all dressed up? I hope you can, those are definitely memories that moms need to hang on to! You are gorgeous Tif. Good luck with the judging!

I would love to judge. My bio is not as impressive as yours. But no calls. There are certain rules set up and not every part of the state abides by them. There is a perferred judges list you are suppose to choose from and you are suppose to take a seminar every two years Also your are not suppose to judge more then 4 Miss America pageants in one year. Hope you get to do more.

judging does sound fun and more relaxing than to be judged. I'm glad you got the chance to do it.

That's really cool Tiffany, I didn't know you did that. You are definitely beautiful and talented and well-spoken, so I should have guessed! I'm sure it's really neat to get to see everything from the other side now.

Hey Tiff! What a little hottie! I heard that the Miss Idaho this year hated the competition with the whole TLC thing. She seemed cute! I think it would be awesome to be a judge!