Here is a picture of Chan a few days old. My friend Camille took pics of him and she did an awesome job, this one is my favorite 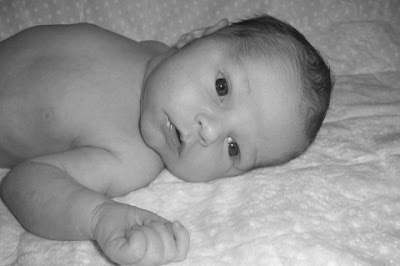 This is one I took a few weeks ago - it's fun to compare the two. 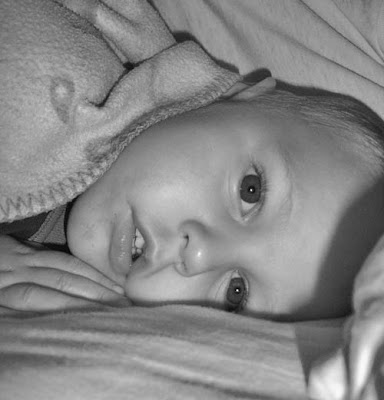 I can't believe my baby is two. Granted he's a not a baby anymore, but a toddler with personality. Still the same, I cannot believe how quickly time goes and I almost feel like crying just looking at pictures of him as a baby. These last few years of embarking on motherhood have been challenging but oh so rewarding. Some days I just want to sit and cry and he tears the house apart and ninja kicks me. Other times when he cuddles up to me and falls alseep I just want to cry again, but for different reasons, maybe just because I love him so much.
Chan was a very very good baby. He was born November 1, 2005 in Idaho Falls. He was born via c-section, weighed 9 lbs 1 oz and was 22 " long. He was really content as long as he was fed and he was fed well as I look back and see that he was almost 14 lbs at 2 months, lol. As he started crawling and exploring his independence he became somewhat of a terror. He keeps me running and sometimes I envy those moms who's kids will sit and play with toys. He cut his first 2 teeth at 5 1/2 months and had a whole mouthful by the time he was 14 months. It was nice to have a 9 month break from teething as he cut his 2 year molars a few weeks ago. He started walking at 10 months and has been running ever since. He loves to climb and boy can he do somersaults. He's really adventurous and is willing to try anything once, or twice, or maybe even three times, lol. He loves when Marshall comes home because he will really get down and wrestle with him. Although he's a little boy of few words, he's starting to talk a little more. I guess it isn't too important to him right now. That's allright though - soon enough he will be talking back and making smart remarks and I can wait for that! I know he is going to be a great big brother and he has really blessed our family. So there's my little tribute to Chandler. Sappy I know - but what do you expect from a mom? Happy Birthday Chandler! Birthday party pictures coming soon..... 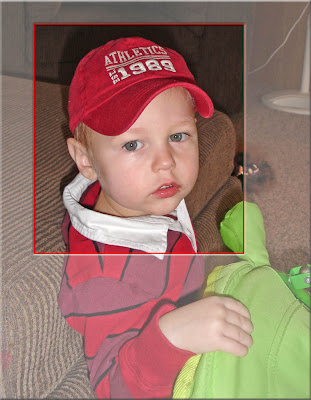 Posted by tiff snedaker at 5:37 PM

Holy cow the past 2 years has gone by fast. I remember talking to you on the phone the night you were in the hospital in labor. Time goes by so fast. He is such a cute little boy!

I refuse to believe that was 2 years ago! Congrats on 2 years of being a mom, Tif! What an adorable little boy you have. Happy Birthday Chandler!!!

I remember the first time I saw Chandler. It was Christmas 2005, when he was one month old.It's scary how fast time flies. from what you describe, I don't think i could handle so much energy.. LOL.
Again Happy birthday!
so now you can blame anything he does on the terrible twos.. LOL

He looks JUST like his newborn picture still! Crazy. What a cutie! Happy Birthday Chandler!