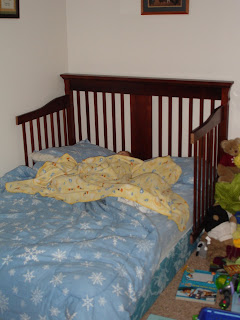 So, since Chan has been climbing out of his crib, he thinks he can come sleep in our bed. I don't mind him in bed with me when Marshall leaves, but with the 3 of us and a queen size bed, there is just not enough room. Last week, Chandler got up 6 different times to come climb into bed with us. It wasn't a very restful night, lol. We finally decided we should move him out of his crib. My mom is replacing one of the beds in her guest rooms and had an extra double bed she said we could have. Although a double bed is way bigger than what Chan needs, it's free - no complaning, right? Chandler's crib converts into a headboard and footboard for a double bed but that didn't really solve the issue of him maybe rolling off the bed at night. So, instead of putting the footboard on, we decided to bag that and the mattress fr 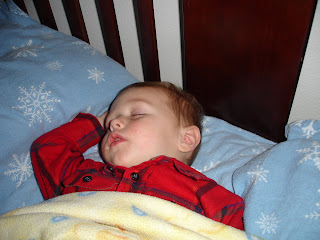 ame and just put the bed on the floor. We basically took the front off the crib and this is what we came up with. Chandler usually comes into our bed right before he goes to sleep to read books and "calm down" LOL. Now we can do that in his bed and lay by him until he falls asleep. If he comes into our room in the middle of the night, I take him back to his own bed and lie with him again until he falls asleep. I have to wonder if it isn't so much the bed but maybe he just gets lonely & knows that Marsh & I sleep together, so why doesn't he get to? Two nights ago, he got ups twice and last night he didn't get up at all, he slept in his bed 11 hours straight - talk about nice!! Let's hope it lasts.

Chan is also starting to show some interest in the potty. I know we are a LONG ways off, but any interest is good, right? The other night, he came out of his room and said, "Bleh!" We always say bleh while we are changing his diaper and he thinks it is pretty funny. He said it again and I wondered if he was poopy. Sure enough he was. The next morning while I was doing my hair, he lifted up the toilet seat and started tugging at his pants. I took his diaper off and let him sit on the toilet. He looked down like he expected something to happen, got off, and clapped for himself. He did this two more times yesterday and the third time he looked at me and said, "bleh?" as if to question where it was? Obviously there was nothing in there since he didn't actually go, but he wanted to flush the toilet anyway and clap for himself. We decided to pull out the "ROYAL POTTY" that my sister gave us. It makes noises to help praise the child who goes in it. LOL - whatever works! (Thanks Jer!) He thinks it is pretty neat. I know it's a long time coming, I'm hoping he's potty trained by 3 but I'm not going to push him into anything.

Today I also had my 31 week appt. Since I am 30 + 6 I am calling it my 31 week appt. I waited 50 minutes for my 2 minute appt :( Chandler was patient for about 20 minutes and then kept throwing himself on the floor, telling me no, and crying. Oh well. Weight was at 167, baby sounds awesome, and is measuring on. 7 lbs in the last 3 weeks - WAHOO! (sense the sarcasm here)

I am assuming he is head down because Dr. Barton found his hb the first place he put the doppler on and said, "Great, right where it should be." My appts are getting closer together, the next one is on Nov. 28th.
Posted by tiff snedaker at 12:43 PM

milestones! going from crib to bed. That is great he is staying in bed. Good deal!

Good idea about the bed. He is so cute in his sleeping picture. Also, congrats on the big baby! Heehee. They haven't even given me a size estimate but I will ask on Monday because I really want to know what they're thinking. I had Deano at 38 weeks so I am hoping I go next week or the week after with this little guy! *Fingers crossed* Things are starting to get uncomfortable (not that they haven't been for some time now).

TAG YOU'RE IT! Go to my blog for rules!

I don't think I'll gain as much weight this time, thank goodness. I guess it helps to start out at a higher weight? Ha. I bed Chandler likes his bigger bed. Logan sure likes his toddler bed. I wonder when you switch them to a regular bed.