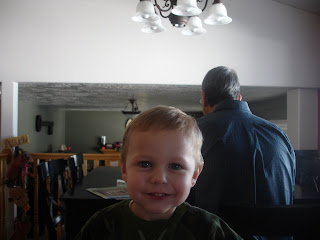 Thanksgiving was great! As I mentioned in a previous post, we went down to Justin & Avry's in Syracuse for dinner. We went down with my parents Wednesday evening and got back Friday afternoon. It was nice just to lounge around on Thanksgiving and EAT! Jason (my brother) came up with his friend from Salt Lake and joined us. It was fun to see him too. 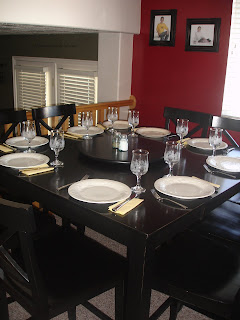 Dinner consisted of Turkey, mashed potatoes, stuffing, yams, cranberries, a relish plate, rolls, frog eye salad and of course pie for dessert. By the end of the meal I could barely breathe between my full full belly and Rowan taking up the rest of the room. Maeli was Chandler's only cousin there and is so unbelievably great with Chandler. She's an awesome babysitter and loves to play and take care of him. (She is 7) Chandler loves to wrestle and Maeli just laughs and takes it. We took this video of Chan mauling Maeli. Notice Avry's laugh in the backround - priceless :) Chandler kept saying "Oh Fun!" while they were wrestling too. He said it probably 8-10 times while they were wrestling and did it a few times in this video.
Photo Sharing - Video Sharing - Share Photos - Free Video Hosting

After 5 hours of sleep we got up to conquer Black Friday! It's become a tradition for us to get up and go shopping. We scope out the ads on Thanksgiving, make a list, and decide which stores are most important for us to go to, lol. We went to Walmart first at 5 am and that was a joke. They had hardly any stock of their sale items and you had to wait in a huge layaway line to try to get what you wanted. Yeah right -we just left without buying anything there. Next was Target at 6. I'm a huge fan of Target. They were restocking items as people were grabbing them which was nice.

This video is from all of the crazy people running into Target. Half the reason I go out on Black Friday is to laugh at everyone :) There was a girl who was trying to get into Target and jump the line. They had security guards making sure noone was doing this but this girl was determined to get in. I wish I had video taped it but the security guard told her quite a few times to go to the end of the line. She proceeded to tell him no and started hitting him. Needless to say, she was ejected from the line. We only went two other places, Walgreens & Kohls. Avry got in line at Kohl's as soon as we got there while the rest of us shopped. We waited in line for an hour & 20 mins there! We were done by 10 am and I am happy to say I am done shopping for Chandler & Marshall. I also have my shopping done for most of the other people on my list, except for my dad and father in law. They are tricky. Men are tricky to buy for in general. I think I have a few ideas though. I'd like to be completely done shopping in the next couple weeks as my back ached soooo bad after shopping today and I'm still 7 weeks out from having this baby. It's also nice that Marsh & I started saving for Christmas about 4 months ago, putting some money away every month. I don't think we'd be having much of a Christmas if we hadn't done that. I think we will make a habit of it.
Posted by tiff snedaker at 9:48 PM

WOW OH WOW, that line KILLS me!! I was dying watching that. This was this first year in a long time I have skipped BF, and after watching that, I'm not sad anymore. Oh, and I'm really coveting Avry's table- I REALLY want to know where she got it. Glad you had a happy Thanksgiving!

One more thing- my kids thought that video of Chandler was hilarious- especially the somersault. What a funny kid!

Looks like you guys had a lot of fun at Avry's! I did minimal Black Friday shopping - didn't go out until 8:00 a.m. and only hit Fred Meyer's and Target. I agree, Target was very organized.

Hahaha.. loved the recap of our escapade. Too bad you didn't have video coverage of the girl hitting the security guard- now that was good times! Oh Camille, I got my table at RC Willey about 18 months ago. I have had a lot of compliments on it.

Thanks Avry! Now I have something ELSE to put on my christmas list! :-)