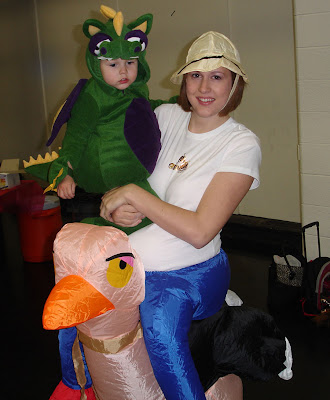 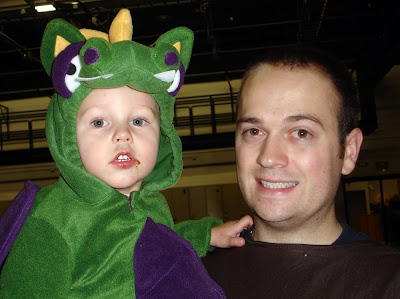 Saturday night we had our ward carnival. Chandler finally got to wear his dragon costume I bought for him over 2 months ago. LOL, I was a little excited about Halloween. Everytime we've tried to get Chan to wear this costume he starts screaming. When we put it on him Saturday he was so happy to wear it which was a nice change. I had the big bad wolf costume from bowling but Marsh & I decided to see what else we could find. We found this ostrich blow up costume and thought with my pregnant belly it would be hilarious. It was :) The costume had a nice bubble bum which made me feel that much more attractive...ha ha ha.
Marshall wanted to dress up like the Verizon man but we didn't want to pay $30 for a blue coverall suit. He has glasses just like the Verizon guy and has been told on multiple occasions that he looks like him. My dad has a blue coverall suit so maybe we will borrow it for Halloween so Marsh can be the Verizon man. So for our ward carnival Marshall was the wolf, even though he never put the mask on. And here is Chandler trying to do the limbo :)
Photo Sharing - Video Sharing - Share Photos - Free Video Hosting 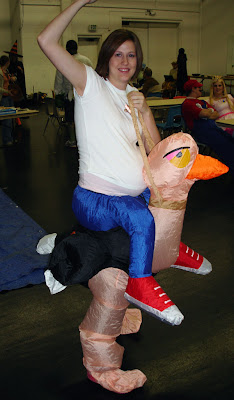 Posted by tiff snedaker at 8:55 AM

Your outfit makes me giggle! Too funny. Nice blog by the way.

your costume is so original!!
you guys look cute!!

love your outfit and the dragon is adorable. looks like you guys had lots of fun.

very funny costume - what a babe. The Chandler being scared about his costume reminds me of Moura being freaked out about her Raccoon costume when she was two. Everytime she saw the head - she would run screaming.

You guys are all very creative.

Can you tell me how you made your heading? It look super good!

That costume is hilarious Tiffany. I like Chandler's Dino too! No worries about timing, we bought Dean's in August too. Haha!

Lila - I just made it in photoshop and uploaded the image. Thanks!

are you wearing that tommorrow night. Very cute

Awesome costume!!! It actually made me laugh out loud!