Marsh and I spent 3 wonderful days in Los Angeles this week.  I bought him Lakers tickets for Christmas and we made a trip out of it.  We were going to drive, but I ended up finding airfare for cheap, so we flew and rented a car once we got there.  We flew out on Sunday and got to LA about 10:30 am.  By the time we got our car and to the hotel it was around 12:30.  We got settled and headed out to find some lunch.  We ate at a trendy Sushi place and the food was fabulous.  We then headed to a local market to find food for breakfast for the next couple of days.  The rest of the afternoon, we hung out at the hotel.  Later that night we ate at California Pizza kitchen and looked around Target a little bit. This trip was a bit hard when it came to eating.  Either I felt like eating, or I didn't.  Normally I LOVE to eat out, but most of the time when it was time for dinner, nothing sounded good.  I knew I had to eat or I would feel even more sick, so dinner was forced.  I ate a small slice of pizza at pizza kitchen and a couple crusts because I could stomach a bland crust.

Monday we headed out to the Santa Monica Pier to spend the day.  It felt a bit chilly at first and was around 55 degrees, but it was beautiful!!  The sky was blue as could be, and it was nice to get away from the inversion that Salt Lake seems to be constantly experiencing. 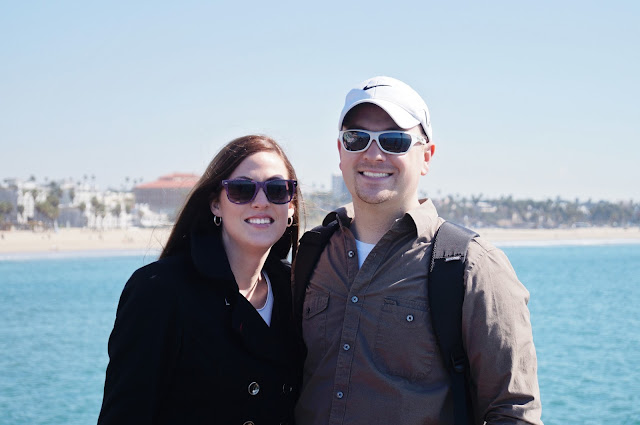 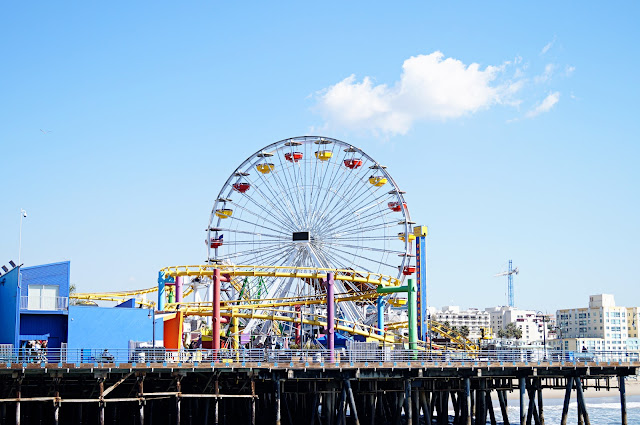 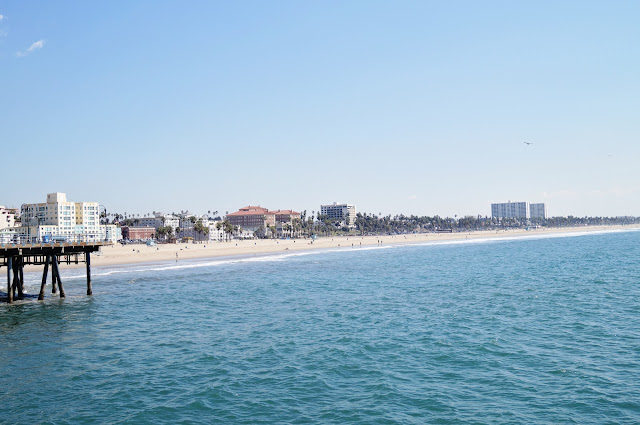 I wore my jacket most of the day and honestly, I expected the weather to be warmer than what it was.  We walked around the Pier, took pictures by the ocean, even took some pictures in a photo booth which I don't think we've done since we were teenagers. 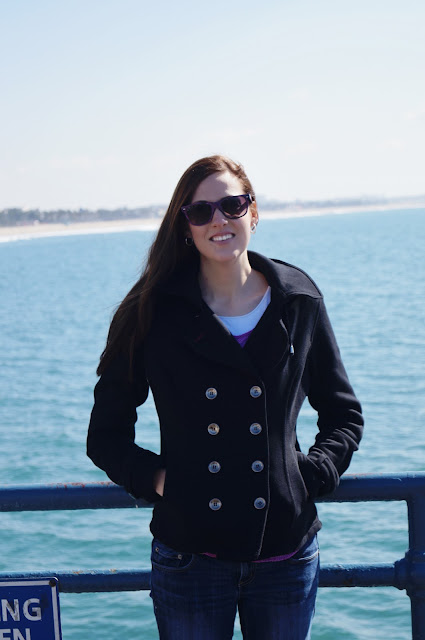 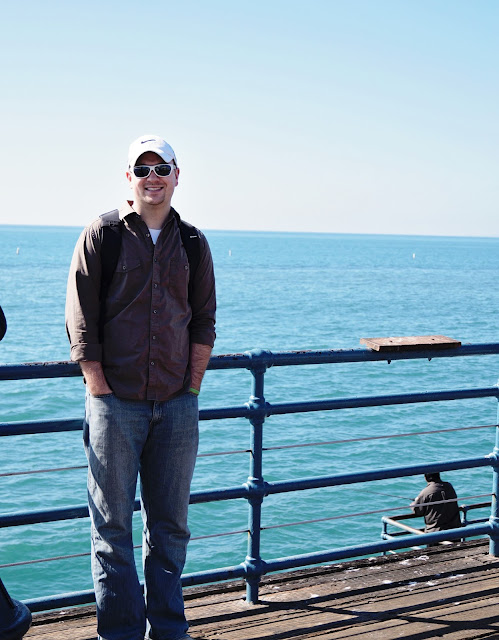 We ate lunch at Bubba Gumps and had a great view of the ocean.  After that, we thought it would be fun to rent bikes.  We found a bike rental shop and spent the next 2 hours riding bikes along the ocean.  It was absolutely beautiful and had warmed up a bit more so the weather was perfect.  There seemed to be so much going on, even though it was Monday. 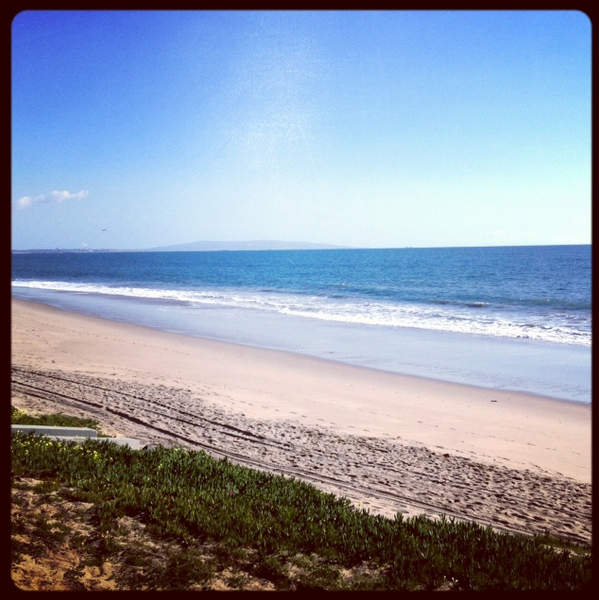 By the time we got our bikes back, it was close to 4 pm.  I told Marshall that I wanted to go see a movie that night so we started looking for theaters.  I wanted to see the Twilight Movie again (Breaking Dawn 2) and I wanted him to see it with me, so he kindly obliged. We found a theater about 40 minutes away that we drove to.  Have I mentioned that I have the best hubby ever?  Before the movie, we went to Sizzler for dinner.  I ate cucumbers and tomatoes for dinner while he feasted on steak and everything the salad bar had to offer.  Another one of those great dinner nights, only veggies sounded good.  It was fun to go to the movie without kids.

A lot of this trip, I just felt like I was so cold and I have no idea why.  We had turned up the heat in our hotel room in the morning and we got back and it still felt cold.  We stayed at a Sheraton downtown so naturally I thought it would be really nice.  It was a nice hotel, but it was old.  The front desk told us that the heating and air was central and there was no way to really control it in the room.  Marshall went and got a space heater instead from the front desk. I didn't really want to sleep in my jacket all night. :(  The first night that we were there, they also gave us a room with double beds instead of a King.  Marsh went to talk to them about that, and they were all booked out because of the grammys going on that night.  Instead, they gave us free parking for the entire time we were there which saved us about $100.

On Tuesday, we went down to the Hollywood walk of fame.  We walked and walked and saw a lot of the stars.  We debated going to the Wax Museum and Ripley's Believe it or Not.  Marshall said we could do that or go shopping.  That was definitely a no brainer for me!  We found some outlet malls and spent what seems like a small fortune.  The next 3 hours we shopped and shopped.  I found a new purse and a bunch of long maternity dresses, a skirt,  and tops.  Marsh got some new work clothes and much needed jeans and t's.  We ate dinner at a 50's type diner called Ruby's before heading out to the Lakers game. 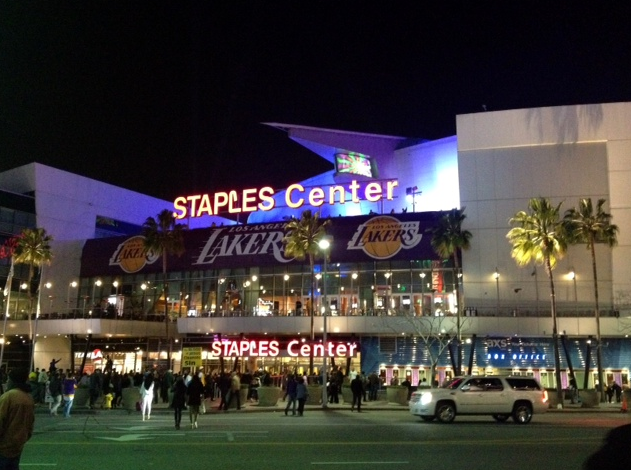 Once we got in, we went to have our tickets scanned and they wouldn't scan.  There was some sort of a problem with our tickets.  I felt sick.  I spent a good chunk of change on this present for Marshall because they were pretty good seats.  We went to customer service and the guy we were working with said they might be conterfeit.  Come to find out, they were season ticket holder's tickets and they had forwarded new tickets to the season ticket holder AFTER I bought these.  I called the service we bought them through and the girl I talked to felt so bad.  She said there was nothing that they could do, but if we could get new tickets, they would reimburse us, plus any extra cost.  She said to try Stubhub to see if we could get tickets.  Stubhub had 0 tickets left, said that they were sold out.  I lost it here and started crying.  I felt horrible because seeing the Lakers play is honestly something Marshall has always wanted to do.  A bucket list thing.  We had flown all the way down for this game.  Our last attempt was to see if the ticket office had any tickets.  They said they only had singles and I didn't want to sit without Marshall.  As we were giving up hope, she said she had two seats open up.  I asked the price and they were only $10 more than what we had paid for ours.  I asked if they were comparable to our seats that we had and she said they were MUCH better.  By this time, we had been trying to figure out the mess for over an hour.  We got our tickets and ran inside.  There was only a few minutes left of the first quarter.  When we realized where our seats were, we were SO SO excited!  They were front and center.  The only seats better were courtside tickets.  So we were basically second row.  All of the players looked so big up close.  It was amazing to see all of these players, especially ones that even I was familiar with like Kobe Bryant, Steve Nash, Dwight Howard, and Metta World Peace.  Pau Gasol was injured, but it was still an all star lineup.

When we first got there, I looked over under the basket and thought I saw Shaq.  I asked Marshall and sure enough it was him!  Marshall walked over by Shaq and told me to take a picture.  Marsh is in the yellow hat, Shaq is in red.  It was so funny although security got mad at him, lol. 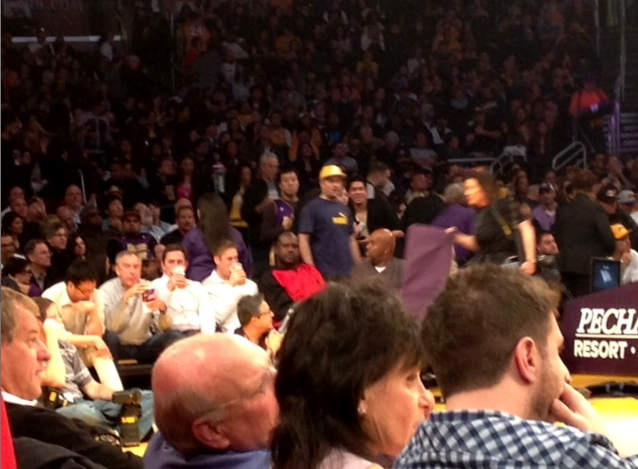 The game was close but the Lakers ended up winning.  Kobe only had 4 points which is unheard of for him.  In fact, it was his lowest scoring game since he was drafted 17 years ago.  Ironic, yes?  He had a lot of assists though. 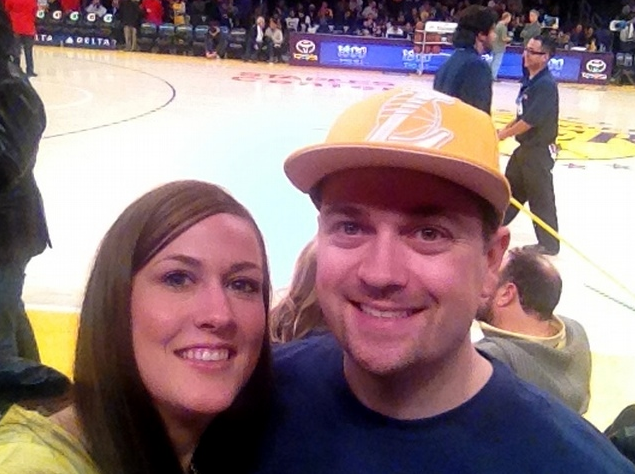 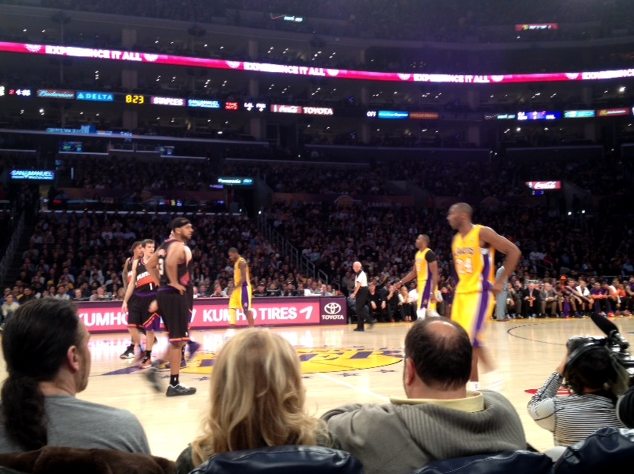 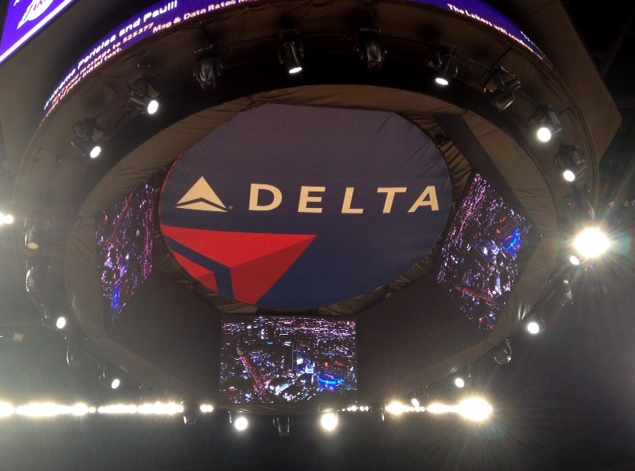 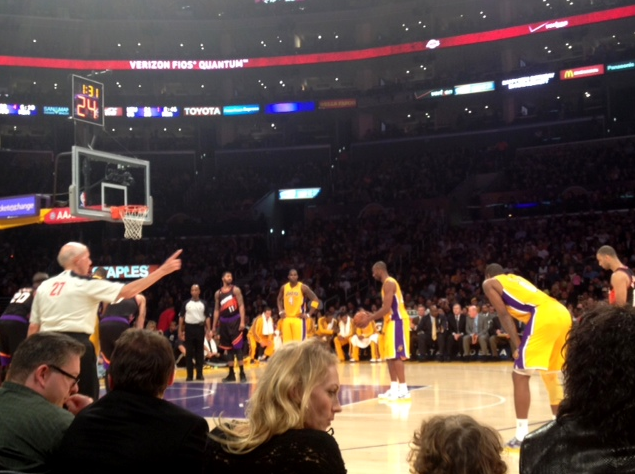 It was seriously the most amazing experience and Marshall was smiling and so excited the entire time.  I have no idea how we got tickets on the 2nd row for what we did.  When I was looking at them back in December, tickets that good were $1200 each.

I'm kicking myself for not bringing my nice camera since we were so close.  Of course, both our phones went dead and I only got a little clip of them playing before it died.


After the game, we ate at IHOP and then went back to our hotel.  We got a whopping 3 hours of sleep before we had to be up to make our 6:45 am flight.  It was a wonderful trip, and much needed time with my sweetheart.
Posted by tiff snedaker at 11:20 AM

Looks like such a fun trip. I can't believe you got such good seats, that's amazing!