I'm all for getting Chandler potty trained. Although I keep having to resign myself to the fact that he isn't quite ready. He'll be 3 in a couple weeks and is not even close. We've gotten him potty books, let him run around naked, sit in the potty for long periods of time and he just doesn't get it. I'm not pushing him, but he has shown interest and likes to go sit on the toilet. Last night while we were in Target we decided to get some big boy underwear to see if it would inspire this little guy. He is really into Diego right now so that's what he picked out. Last night when I got the underwear out of the package I noticed on the package that it said, "Do not iron." I started laughing at the thought of someone ironing toddler boy's underwear. Marshall's sarcastic comment, "Well I'm sure we could iron them so we could put them in a frame on his wall. I'm sure that would inspire him." We both laughed hard at that one.
Today I changed his diaper and we decided to give the underwear a go. He seemed pretty excited and ran for the potty. He sat down on his little chair and I proceeded to explain to him that he needed to pull his underwear down. He thought he had to completely take them off. Whatever. A few minutes later he stood up and said, "I did it!" Of course he didn't do anything. I tried to put the underwear on him and he started screaming. We finally got them on and he went and sat on his potty chair again. I think he thinks if he is wearing underwear he has to sit on the toilet. Yeah, he's just a LITTLE confused. We finally got to the point where he realized he could go play with his underwear on. Just then Marshall and I got into a conversation about what happens if he poops in these "cute" little underwear. After discussing who would clean up the first accident, we put a diaper back on him.
If that wasn't enough, I left the room for a few minutes and when I came back Chandler was holding this little bear who was wearing his underwear. I asked Marshall where he got the bear. He said it was my build a bear that used to be dressed like a missionary. He gave it to me before his mission. Now my poor missionary bear is wearing Chandler's underwear. Of course Marshall would think to do that. Giving him some different inspiration, lol. 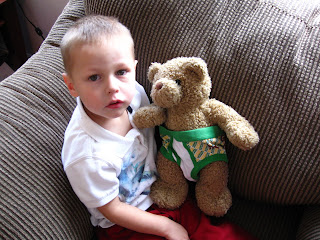 Please tell me that there are LOTS of you reading that didn't have your child potty trained until age 4 :) I think we're headed that way. I'm tired of diapers.......sigh. At least I'm getting a little comical relief from all of it though.
Posted by tiff snedaker at 9:07 PM

It'll come, don't give up! The bad news is that you WILL have to clean up accidents, but the good news is that most kids are potty trained by the time they are in 1st grade, so don't worry. Just keep encouraging him each day.

Advice from your wise older sister. Don't rush it. When they are ready, it will happen. I tried to rush Moura into it when she was around 2 1/2 or so. All we had was UTI after UTI and trips to the Dr. for antibiotics because Moura would hold it in all day instead of going potty. It stressed her out.

Both of my girls didn't potty train until 3 1/2 and when they finally did, it happened fast. They both were night time trained by age 4. And luckily we don't have issues of bedwetting or anything like that.

So I say, don't push it too hard. And to this day, that is still been my LEAST favorite thing about parenting - toilet training. It sucked.

We've been attempting encouraging potty training, too. I'm convinced this is the reason why some people only have one kid!! Sometimes I feel like I never want to do this part again. :) We're not pushing it, either. I don't know any adults who aren't potty trained. :) They will do it when they are ready!!

I can attest to what Sara said - "most kids ARE potty trained by the time they are in 1st grade"! It's true. And I know my nephew (same age as Chan) hasn't "gotten it" yet either...so you're not alone!

Ella didn't really care until about 2 months after her 3rd birthday, then she just got the hang of it. She did regress once for a about 3 weeks, but she is back on track again now. It is hard not to get impatient, but they figure it out.

That's pretty funny about the underwear and the missionary bear.

I almost gave up with Dean and convinced myself that everyone was right and it was too early. But, I decided to give it another couple days to see if he would improve and he did! What I finally had to do was stop taking "no" for an answer and just take the kid to the potty whether he admitted he had to go or not. He goes all by himself now but it still takes extra effort on my part at friends' houses because he'd rather play than pee. We've been accident-free for weeks now and I am SO glad I stuck it out!

Hang in there. I finally made a racetrach potty chart and he got to put a racecar sticker on it each time he went pee (three stickers for poo) and once he had five stickers he got a little toy or treat from the toy bag. He hasn't used the chart in months but it really got him excited at first and saved me money from having to give him a toy for each success.

Ha ha.. this is where I disagree with Jeralee- not every child is a horror story like Moura. Matter of fact I rarely hear of stories like Jer's. I started both of my kids at the age of 2. Actually Maeli was 18 months & trained by 2. Kaden started at 2 & was around 2 1/2 by the time his was complete.

Although I do agree not to push them. Every child is different & will do it at their own pace. The whole sitting down thing did NOT work with Kaden he felt like he was not a "big" boy so once I let him stand & do it he caught right on.
The underwear on the bear is funny!

I "think" Morgan is actually potty-trained! Knock on wood... We bought her a bike and told her she couldn't have it until she stayed dry in her big girl underwear (Minnie Mouse). She's been pretty good, and even stayed dry all day when I visited Monica-on the car ride and all! Good luck!

Jordan turned 2 in July, and I've been trying to start the whole potty training thing....it's so stressful! I've decided I'm not ready and I'm sure he's not either. Who knows how old he'll be when we try again!

Weird... I swear I left a comment on this post. Weird. Anyway, I agree with everyone else- it will happen when it happens. And I hate to say it, but it really isn't that much easier when they are potty trained, just different! Don't rush it, and don't worry!

Oh, and yes, it would be awesome to see you while I'm up there. I've got wedding stuff all day Friday and quilt shops to visit and sewing on Saturday, but it would be fun to stop by on Sunday on my way back- what time is your church? It would be super fun to take a few family pictures, just an idea... :-) Can you text me your phone number? You've got my cell, I think. Hopefully I'll see you soon!