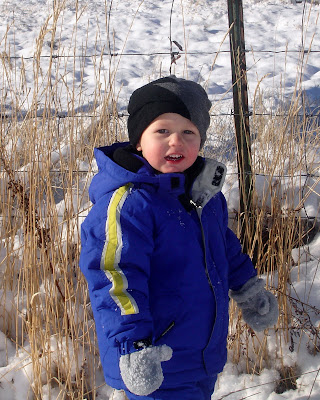 I can't believe how much snow we've gotten in the last few days!  I'm so excited and though it's no fun to drive on icy roads, I'm so happy that we will be having a white Christmas!  Monday I went out and bought some snowboots for Chandler and I.  Most of my shoes are slip ons that are backless so I knew my feet would be sopping wet the rest of the winter if I didn't do something about it.  Tuesday Chan & I decided to venture out around the apt complex and play in the snow. 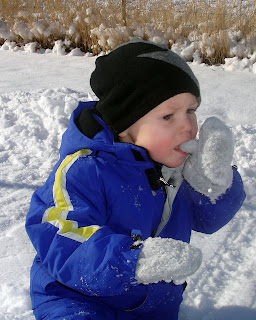 He was mesmerized by it and kept trying to eat it.  Before we went out, I was trying to find gloves in case I needed to dig in the snow.  Most of our snow clothes are in storage down at my parents house but I did manage to find one huge glove of Marshall's.  I called him to ask if he knew where the other glove was and he suggested using an oven mit.  LOL - not a bad idea.  I didn't end up using it but if we go out to make a snowman anytime soon I just might do it.  We were only outside for about a half hour and Chan had windburn on his cheeks all day long.  Coupled with a horrible drool rash he has around his mouth his face looked pretty rough today.
He's trying to get his last 2 year molar in and these molars have been the worst!  He's often rubbing at his cheeks and his gums are pretty swollen.  He's also sucking on his hand half the time too.  He was done teething from 14-23 months, so it's been hard to get back into teething these last couple months.
I had a dr.'s appt yesterday.  I had my group B strep test done and baby is head down.  Dr. Crouch said if I see him in a couple weeks, he'd start stripping my membranes.  Don't know if it will help, but it's worth a try.  I would love to have this baby before the 1st but I'm thinking that is wishful thinking.  Only put on 3 lbs in the last few weeks which is nice.  I was 190 when I delivered Chan & am only 175 right now so hopefully  I won't put on 15 lbs in the next 4 weeks.  I feel like I'm not retaining water like I was with Chandler though.  I'm measuring 37 weeks, so a little big but that could maybe also depend on how he is laying.  I start weekly appointments now!  It's crunch time!
Posted by tiff snedaker at 4:05 PM

Awww he looks so cute bundled up in all those clothes! Good mom of you to take him out and let him play in the snow. :) love marshall's oven mitt idea. Tiff I think I have a bunch of old snow pants, boots & gloves from Kade if you want them?? Good luck on your weekly appointments

I am SO jealous. I miss having a white Christmas. It is in the 70s here and I can honestly admit, I hate it. I want it to be freezing and white so Dean can know what snow is (he's never seen any). Merry Christmas. Chan looks adorable as usual. :o)

LOl at the oven mitt idea. We have had the cold weather - in the '30's, but no snow. Rain is back tomorrow. Chandles looks like he had fun in the snow.

Love the oven mitt idea. Have used socks on you kids when you were young. NO SNOW here in SV. But thats the chance you take for early season skiing