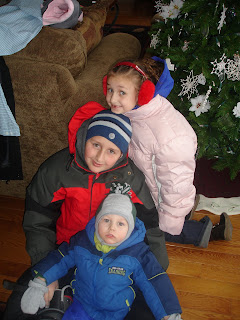 We hope that everyone had a very Merry Christmas - we know we did!
Christmas Eve I hung out at my parent's house most of the day while Marshall went snowmobiling with Justin (my BIL), my mom & my dad. Avry was there and had to go get her kids halfway through the day. We decided that we were going to go to Idaho Falls so Avry could get a few last minute things. She also had to stop in Ucon to pick a few things up. After braving the weather, we decided not to go to Idaho Falls but ventured in to King's in Rigby. Talk about a store with every type of crap you don't need, lol. It snowed so much Christmas Eve, I want to say about 6 inches but I don't know if that's exactly how much it was.
That evening we had our traditional Christmas Eve dinner which consists of hoagies, cold shrimp & all types of finger foods. My dad then pulled out his projector and we watched home videos of Christmas past. I must have been a pretty annoying little kid because everyone is always saying, "Tiffany move! & Tiffany get out of the way!"
After that, we ventured over to Snedakers for about an hour where we set out Santa stuff for Chandler and just visited. We've stayed the night there at Marshall's parent's house the last two years but figured it would be better to sleep in our own bed this year. Chandler has been really cranky and overstimulated the last couple years and I think some of it is lack of sleep. We got up to our apartment to realize that nothing had been plowed out of the parking lot. We got stuck and had to rock the car back and forth for a few minutes before we could get out. Luckily Jeff (Birch) had shoveled out a couple parking spots so we were able to park. (Thanks Jeff!) If he hadn't, I'm sure we would have been stuck there on Christmas morning.

Christmas morning we ventured to Snedaker's at 6:30 am. Chandler was pretty impressed that Santa had brought him a Weebles Playhouse, A Woody Doll, and a Dinosaur.

Chandler checking out his new toys 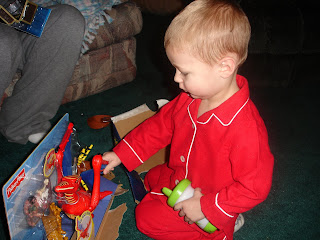 Ashley & Danielle posing for the camera 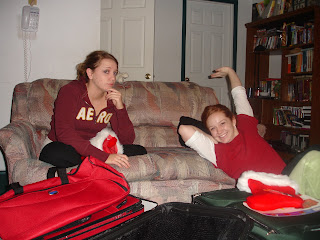 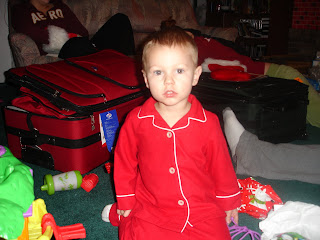 At 9 we went over to my parents house and opened presents there. 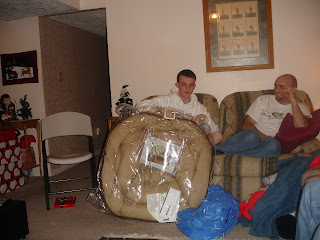 So uh - where does my chest end and my belly begin again? 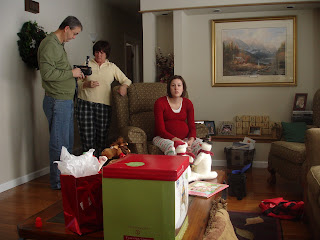 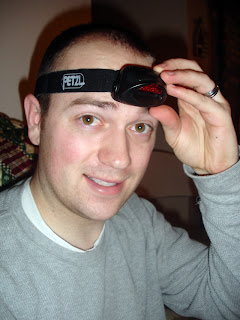 It was fun to see my mom open one particular present from my dad. A big beautiful diamond ring. Needless to say she was in tears and my dad did great - it's so pretty. 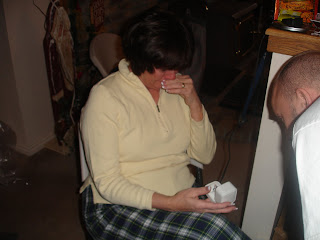 My dad in his Russian hat Geoff brought home for him 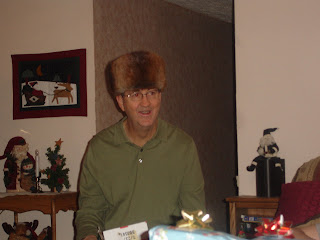 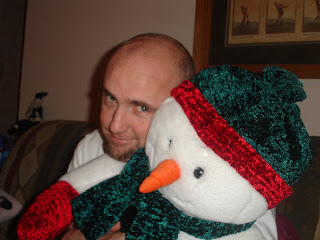 Loved the pics! Jason is such a dork sometimes! It was a fun Christmas & good to see all of you!

Ahh.. those are great picture!
I am so sad we weren't able to be there. It looked like you guys had a lot of fun.
mom got a diamond ring? that is so sweet! love dad's hat and Geoff's chair.

Totally love the pictures and the update! Wish I was there.

Great pictures! Looks like you guys had a great Christmas. I love the picture of your mom, and Chandlers PJ's. I can't believe how big he has gotten. Also, I refuse to believe that the picture on top is Kaden- Kaden who should still be 3 years old... time flies!