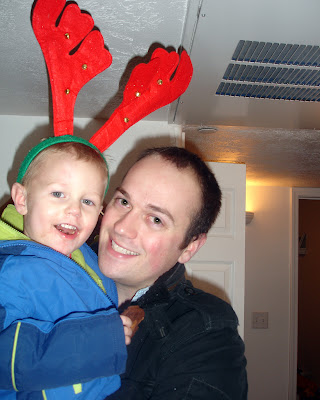 A few nights ago we took some holiday treats to our friends. I got Chandler these little reindeer ears from the dollar store and he loves them, maybe because there's bells on them. He also had on reindeer pajamas but you can't see them because of his coat.

Last night we had a Snedaker Family Christmas party. Chris & Natalie's family (Marshall's brother) are going to Utah for Christmas so we got together before they left to exchange presents between the siblings and have a good time together. We ate lots of food, played Christmas chimes & played a game. Oh and then of course we ate more... :)

Danielle (Marshall's sister) with her Chime 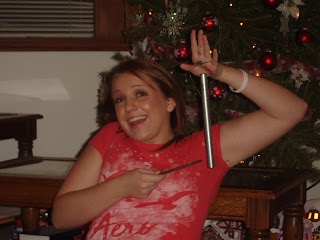 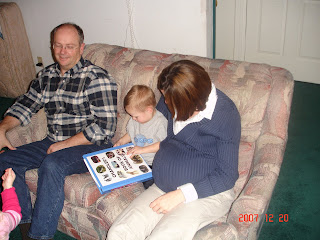 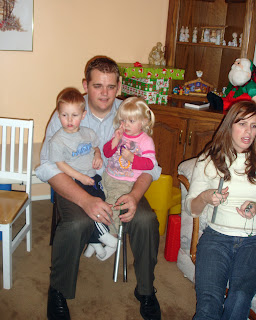 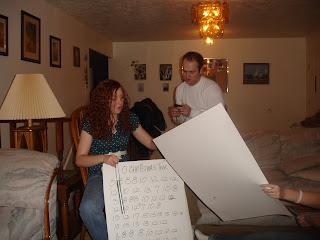 Today Chandler and I went down to be with Geoff (my brother) My mom had a bunch of things to get done and he had nose surgery. He had the same surgery done 2 years ago before he went on his mission but I guess they didn't go up far enough so this time they straightened his septum and cut out a little bit of the turbinate... (or whatever its called) They also went up to expand the entrie way to maxilary sinuses and cut out more stuff. (Half of that was his description, lol) Many times I've thought I'd love go to school to do nursing but here is another instance in which I don't think I could handle it. He has gauze held in place by a band that goes around his head to help with the bleeding. The time that I helped him change it, there was so much blood and a huge clot. He was also throwing up a lot of blood when he first got home. I've never seen anyone throw up blood and I felt so bad for him. I had to tell myself to breathe out of my mouth as I rinsed out his basin, the blood smell was really strong. He's pretty doped up on Lortab & an anti-nausea medicine. Hopefully he'll recover quickly.
While we were there Chandler was playing with all of the singing animated Christmas toys my mom has. She only had 1 at the start of the season & now she has 4. Chandler loves them and thinks they are so funny. This reindeer is his favorite and this video is too cute, I had to post.

Lastly, when I got home tonight there were more Christmas cards in the mail! WAHOO! I have a group of ladies online that I've gotten to know over the last 3 years. I got to know them through an expecting club forum when I was pg with Chandler so we all have kids the same age. We did an ornament exchange and I got my ornament today. I love it. 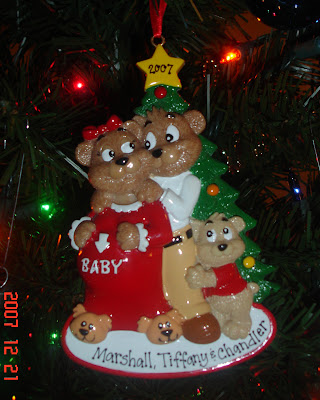 Posted by tiff snedaker at 7:16 PM

you have been busy! Poor Geoff, sucks being him! And Chandler and the reindeer ears, very cute.

Love how chandler bobs his head exactly when the reindeer does. Maeli & I watched that more than once. too cute! Poor Geoff! I remember those days all to well (only 4 months ago was my surgery) so I feel his pain. not fun!

The reindeer was ment for Hainsworth. I bought it after Thanksgiving in Walgreen in Utah. He found it and has loved it. So I had to keep it and find another one like it which wasn't hard. But wound up buying a barking dog. I also got this years Hallmark one and I have last years. Hainsworth had several years of Hallmark. I wish I had those also. We have had fun watching Chandler playing with them. And no it really does not get annoying when you see what joy it gives him. Love the reindeer ears. I had my Santa hat with me and put it on Geoff when he was in the hospital. Will have to post pictures.