It seems like over the past year or so, we've been experimenting in finding something that Chandler really likes to do.  He's so/so with sports.  He likes it ok when he gets there, but is never over enthused about it.  I don't want to push him to do things he doesn't really want to.  He is playing coach pitch right now and we are going to leave sports up to him after baseball.  In the meantime, we are trying to find something else that might work.  He was excited at the thought of trying Taekwondo so we went to a few introductory lessons which he liked and seemed to do well in.  Today was his first real lesson in a class with other kids.  I asked how he liked it and he said it was boring and hard.  I'm sure because it's new that it's hard.  The other kids in the class have been going for a while and know the drill.  I told him to give it 3-4 months and it might grow on him.
He was pretty excited about getting his uniform.  I think it makes him feel more official. 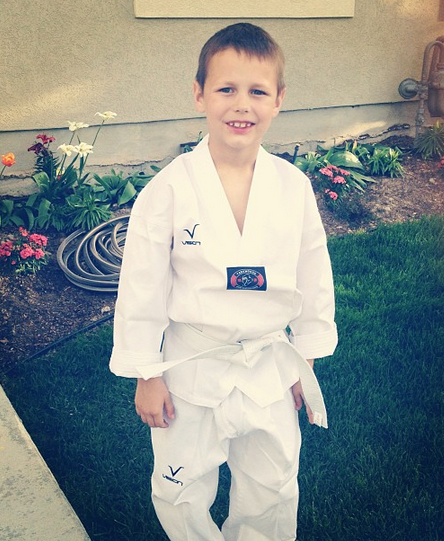 Posted by tiff snedaker at 7:39 PM