The first part of August, I graduated from Ultrasound school.  I never thought the day would come, and  now it's done!  Marshall and I joke that I really should have a Master's Degree instead of a Bachelor's and a Certificate, but I'm really happy with what I've got. 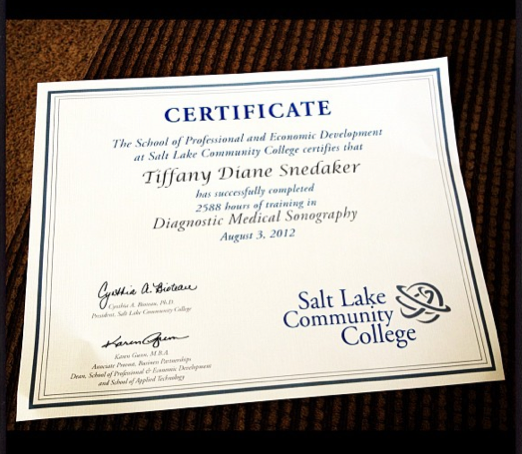 I've learned the last few years just how strong I am and as hard as it was to leave my kids, it's nice to know that if something were to happen to Marshall or if he lost his job again, I would be able to replace his income and we could live comfortably.  My boys have been so amazing and patient over the last few years.  They are such good boys!  Although I've been working as an ultrasonographer for close to 5 months, it's nice to say that I'm done with school.

My battle now is passing my registries.  There is one pre-requisite registry that you have to take before you can take any of the general ones.  It was a physics one that I took while still in school.  It took me 2 tries to pass it.  After physics, there are 5 different registries you can take:  Abdomen, OB/GYN, Neonatal Heads, Vascular and Breast.  You only have to take one to be a registered ultrasound technologist, but I'd love to be registered in a few different areas.  I signed up to take my Abdomen boards this last Thursday  and failed it by only 3 questions.  It was tough for me to swallow.  There were so many weird pathology pictures on the test, and the pictures weren't the greatest.  It was hard to decipher what some of them were so I did some guessing.  I have to wait 2 months until I can sign up to take the registry again and it's $250 to take it.  After I took the test, I called Marshall bawling.  I told him that I felt stupid that I couldn't pass a test.  He told me not many wouldn't or couldn't even attempt to do it and that he was proud of everything I've accomplished.  He also told me he had complete faith that I would be able to pass it.  Marshall seriously is my rock.  What a wonderful man.  My mom was down from Idaho that same day and we went shopping and to lunch.  While I was blubbering and crying to her, she told me that my dad had to take his architecture registry 3 different times.  My dad is a very very smart man and I was a bit surprised to hear it.  If anything, it makes me sit back and realize that I'll study hard again and try to pass it in a few months.  I said quite a few prayers that I would pass the registry and felt great going into it.  I actually felt a lot of peace the day after it was all over.  I knew it was Heavenly Father's way of helping me realize that the timing wasn't right and I needed to learn more before I could pass it.
Although the situation felt discouraging, I'll bask in the fact that I made it through school and have a great paying job that I love.

So proud of you Tiffany!!! WTG, Momma =) You'll nail that text next time and now you'll be so ready for any other certification you choose to get. Go get em, girl!

Yay for graduating and amazing job on your marathon!! You are one incredible woman. :)

So frustrating when tests don't turn out like you had hope. I remember not passing one of my core music classes. It set me back an entire year... hard to swallow at the time, but I passed it eventually.

Congrats on having a marketable skill and doing something you enjoy. It is so crucial! I agree, you should have more than just a certificate for all of your pain. LOL