Glow in the Dark Half Marathon

This year was the first year that Eagle Mountain hosted a glow in the dark half marathon.  One of the fire fighters put it on to raise some money.  Avry and I decided that we wanted to run it a few months back and signed up.  The day of, we had a barbecue with chicken, fresh fruit and veggies.  Then we waited until it was time to go up to the starting line. 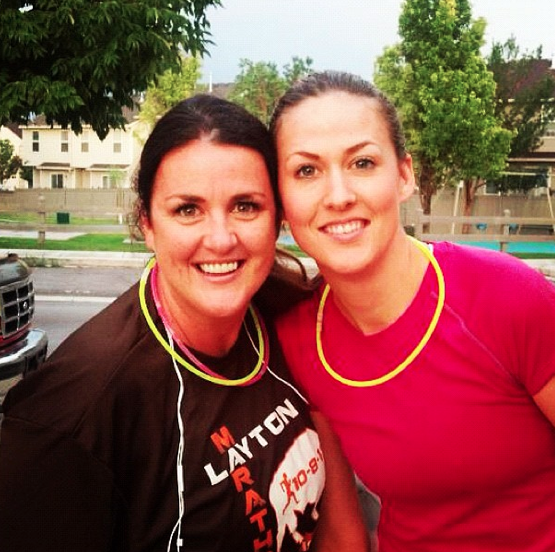 The marathon route is in my area, right by my house, so I've run the paths before, just never all together.  About 2 miles past my house, there is a place called unity pass.  It has a pretty huge hill and is fun to come down, but an absolute beast to come back up.  The race was a bit disorganized since it was the first year.  It was supposed to start at 9:00, but I don't think we really got going until 9:30.  I felt really great the first mile.  As soon as mile 2 started, I got a horrible side stitch.  I didn't want to stop to walk so I was trying to breathe through it, but it was so sharp. I slowed my pace way down and after 15 minutes, the pain subsided.  Before the race began, we had a pretty big storm so the air was incredibly humid for the area.  Not only was it difficult to breathe, I could feel the insides of my thighs starting to chafe.  I've only ever chafed one other time, when I was wearing a cotton t-shirt.  It's normally dry enough in the area that I don't chafe ever, I didn't even have any on the marathon I ran 2 years ago.  It was uncomfortable but I kept pushing on.   As it got darker, it was increasingly hard to see.  The paths weren't very well lit there were multiple times I felt like I was going to trip and fall because I couldn't see the ground below me.   I was feeling really pretty good until I hit mile 9.  We started to climb back up unity pass and the next 1.5 miles was that hill.  It was SO hard.  Once I came down from the hill, the side stitch came back.  By the time I finished, I was so grateful to be done.  Below you can see what the elevation looked like. (Green)

It was definitely the hardest course I've ever run, and it's really difficult to run a half marathon at the end of the day when you've already been up since 7 that morning.  It was a good long run though to help prepare me for the Denver marathon in September.  I finished in 2 hours and 15 minutes, which is about 18 minutes slower than my last time, but I felt pretty good about it considering all of the side aches, humid weather, chafing, the dark and hills.  After Avry came into the finish line, neither of us were feeling very well.  We came back to my house and basically had a puke fest.  I threw up a few times and was so unsettled that I didn't really fall asleep until 5:30 am.  2 days later, I am so so sore.  My legs, knees, hips, back and shoulders are where I feel it the most.  The concept of the race was fun, we were all decked out in glow in the dark bracelets and necklaces, but I'm not sure I would do it again!  I'll chalk it up for good experience.  I have longer runs in the future including a 15, 17, & 20 mile run, but I will make sure to do those in the morning when there's good light, it's cool and dry and my energy levels are higher.

Posted by tiff snedaker at 9:29 AM