It seems like between the months of November and the first of February, we never stop celebrating. In that time span we have Chandler's Birthday, Thanksgiving, Christmas, New Year's, Marshall's Birthday, Rowan's Birthday and my birthday. It's a good thing that our anniversary is in the summer. ;)
Rowan's birthday this year fell on a Tuesday (the 17th) but we celebrated on the Saturday before. 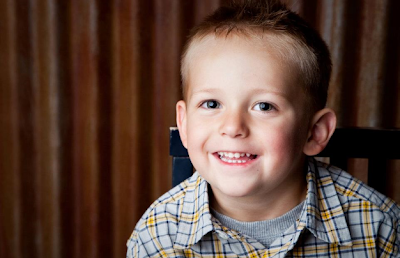 I was going on a blogging trip on his birthday and so we celebrated his birthday on a Saturday which worked out great. We pretty much stayed in, had an ice cream cake, and opened presents. Rowan was pretty content to watch his new movie and play with his new toys so we didn't go out. I still don't think he understood fully what it meant for it to be his birthday, but he knew he got to blow out candles and got presents so he was a pretty happy camper. From us he got: a cars 2 puzzle, the cars 2 movie, a big interactive Mater car from Cars 2 (seeing a theme?), and a little Mickey Fishing game. He also got some Trio Fisher price sets from Gma & Gpa Snedaker, and $20 from Puppy and Papa Nielson. We opted for an ice cream cake this year which I thought was a great success. I don't love to make cake, and when we buy the themed cakes, we end up having so much leftover which I don't want hanging around. So instead we bought a Lightening McQueen car and stuck it on top of the Ice Cream Cake. Huge hit, genius thinking.
I took a ton of pictures that night and when I went to upload them today, they were all magically gone. I'm so disappointed to say the least as we had gotten some cute pictures of him. We, however took some video which I've compiled below. He got so so excited, and even has a Mater impersonation down, so you definitely need to watch the video below! (Ignore the title text thing, I forgot to put in a title in imovie.)

We sure love our little Row Row and even though he isn't a baby anymore, he's still my baby. Happy Birthday Rowan!
Posted by tiff snedaker at 11:16 AM

Oh my goodness Tiff! I can't believe he is 4 already.....it seems like I was just talking to you when you were pregnant with Chandler! Your pictures of your boys are so cute...you are an awesome photographer!

That's a lot of celebrating for sure but sounds like lots of fun though too!! Happy b-day to your little man. So sad you lost the pictures but at least you got some video!