I took the boys to see Santa today. While standing in line, there was a big sign that said, "We don't want your kid to have a picture with Santa unless you pay $25." Maybe it wasn't quite worded like that but they didn't allow cameras or cell phones for pictures with Santa. Lame. Might I add that the $25 package came with like 1 5x7 and a couple 4x6's? Talk about a 1000% markup. We waited for a half hour, and then Chan was star struck and didnt talk much. He told Santa he wanted a robot? Uh- yeah....ok? I think his mind changes every day, depending on what catalog we got in the mail that day. Santa told Chan to be sure to be good and not go to time out. Chan just stared at him in awe. He must have seen him in time out a few times this week. Amazing what the man in the big red suit knows. Rowan mumbled a few things in a very Rowan like way and we got a picture in front of a Christmas tree. (Free of charge, provided by my iphone.) 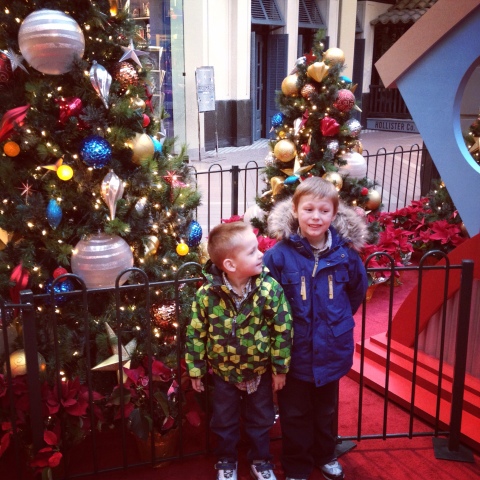 I believe too!! It was so much fun to watch the excitement in your boys eyes over Christmas! It made me miss that mine were little.. :( and YES those stupid pictures are WAY overpriced!