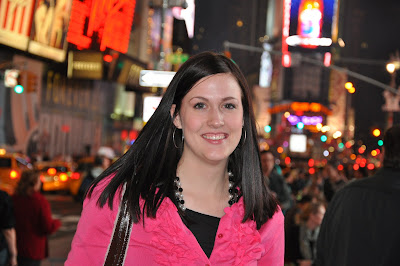 Last week I made a super fast day trip to New York City. It was actually a sponsored trip to view an exclusive screening for Secrets of the Mountain, a movie that will be premiering on NBC this next Friday. I think a lot of people were just plain confused when I told them I was going to New York to a movie screening. No, I'm not suddenly famous, but I guess that's what happens when you build a blog as a business, and work with PR. :) The agency overseeing the project was one that I just happened to work with on a Carrabbas review a few weeks back. They were looking for some mom bloggers to come view the movie and give feedback since it is supposed to be a family friendly film and the idea actually came from a mom. I only had about 4 days notice but Marsh was able to get some time off work and my SIL was able to help watch the boys as well. The film was sponsored by Proctor & Gamble, and Walmart. It was all expenses paid and I'm dying to go back to NYC again.

I flew out at 8:30 am on Tuesday morning. Our plane actually sat on the ground for over an hour since we were getting all of this funky snow and the wings needed to be deiced. 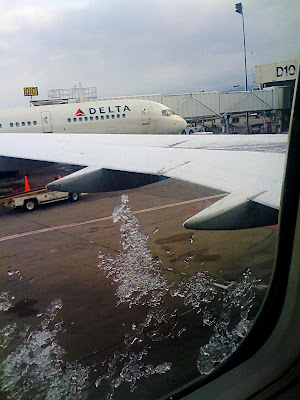 Originally, I was only going to have about an hour and a half to get to the screening after the plane landed, so I wasn't excited about that. The flight was uneventful when we got in the air, although I'm not a huge fan of flying by myself because that means awkward conversation with whoever is sitting by you....for 4 hours. Here is the view from the plane as we rounded NYC to land. 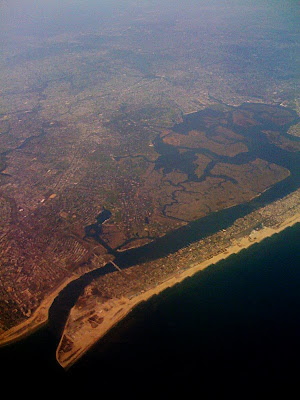 When we finally landed at JFK, we waited on the plane for another 40 minutes before we could get off. The screening was supposed to start at 5:20, and I got off the plane at 4:45. Not great since it was at least a 45 minute drive into mid town Manhattan. My driver spoke hardly any English and was constantly slamming on the brakes. As we got closer to Manhattan, there were people EVERYWHERE. I've never seen so many people in a concentrated area. I got to the screening 20 minutes late and sat down to watch. There were snacks and delicious food, not to mention it was in this 2200 square foot penthouse at the top of The London. (53rd floor) Beautiful! 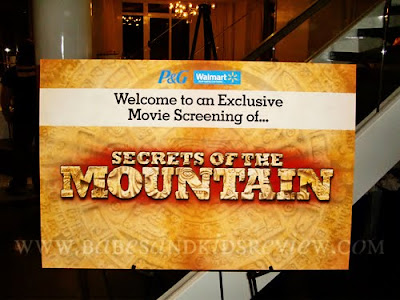 After the screening, we were able to talk to a producer who helped make the movie as well as another rep, and ask questions. The music for the movie was great as well, Randy Jackson was in charge of it. After the movie was over, I realized at this particular screening there were only 2 other mom bloggers. One was one that I have networked with but never met. Here I am with the other two bloggers as well as some awesome girls from the PR agency that I worked with, and a rep from aol. 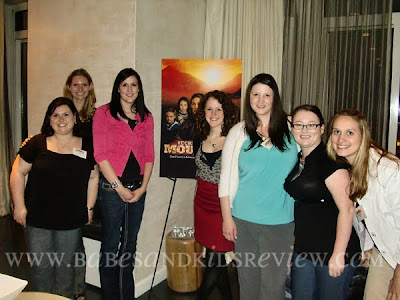 Picture of the penthouse. 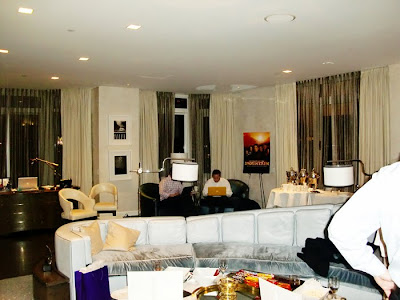 The view from the penthouse was crazy awesome. I tried to take some pictures, but they don't even do it justice. 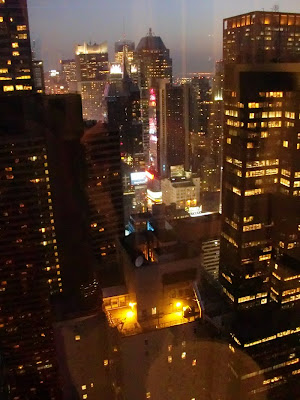 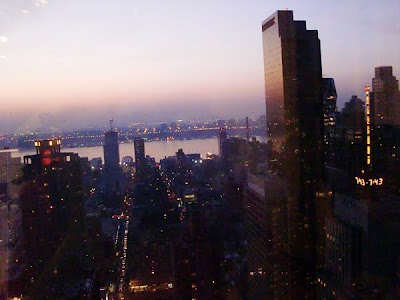 After it was all said and done, I walked back to the hotel with the two other girls and checked into my hotel, Dream. Super nice as well! 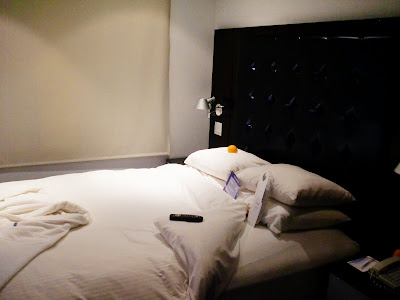 The two girls I hung out with the rest of the night were super cool. One was from Sarasota, FL, the other from Portland, OR. We clicked very easily and had a great time walking around the city. 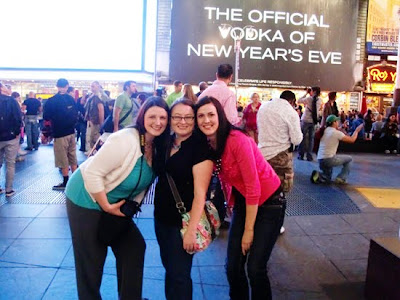 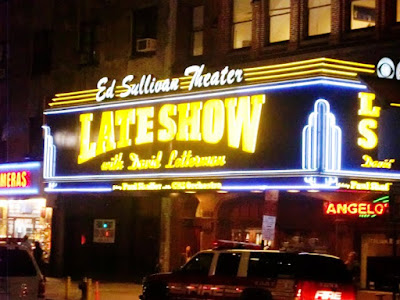 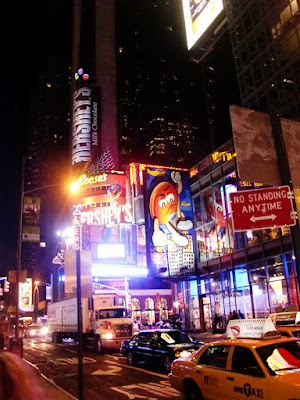 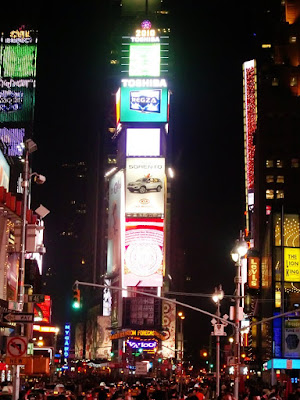 After wandering for quite some time, we ate dinner in our hotel because everyone kept recommending it. Restaurant was called Serafina and I had the most delicious heart shaped Lobster ravioli. 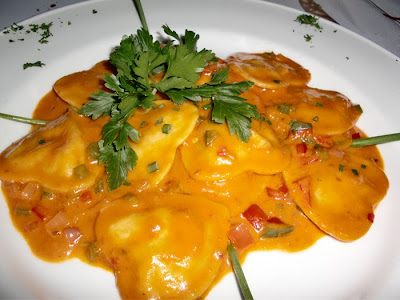 We stayed out until about 12:30 and then I was beat so I went back to my room, watched tv for a bit, and went to bed. 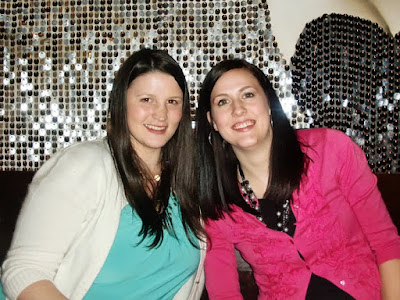 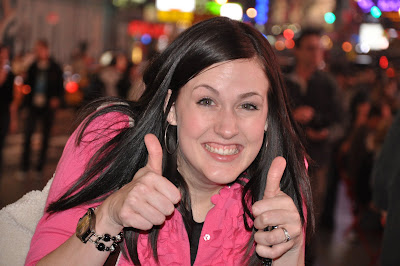 The rest of the trip was pretty uneventful other than the fact that I got some crazy motion sickness between the drive to JFK and the flight home. (I think I take after my sister Jer who gets crazy motion sickness.) I sat in between 2 old men the whole flight home, and it took 5 1/2 hours to fly home instead of just 4. I managed to keep my cookies in until later that night. I thought I could sleep the motion sickness off but that didn't happen. I'd love to go back to NYC for a longer trip, it's definitely amazing!
Posted by tiff snedaker at 11:14 PM

So fun! What an awesome experience Tiff....I am dying to go to NYC. Remember Sami (she was our roomate at Camden for like one month?) she lives there. How was the movie?

How fun! I loooove New York City, it is one of my very favorite places. Looks like it was a whirlwind trip, but that you had a lot of fun!

That's awesome! Glad you got to have the experience. I've never actually been IN NYC. Just the airport.

That first pic of you is so cute. What an amazing opportunity that you got to go to NYC for free just so they could get your valuable opinion! Way to go!! Never been but would love to go someday. Glad you got to go, even if it was just for a short visit.

Ooooh, I love New York! I'd love to go back sometime. Last time I was there I was hauling around a cranky 10 month old Carson, so I don't think I got the true experience! What an awesome experience for you to get to go see the movie premier!

Dang! I think I better start up a review blog!! How awesome for you!!

New York City!! That's amazing!! I am so jealous and sounds like you had the time of your life.

FUN! That ravioli looks awesome! Uh, and just so ya know, when you started mentioning how ill you felt on the way home and then some, all I could think was that you're pregnant. Haha! :o)

Probably because I get incredible motion, morning (anything) sickness while pregnant. Ugh.