Bad Marshall- but good idea none the less. 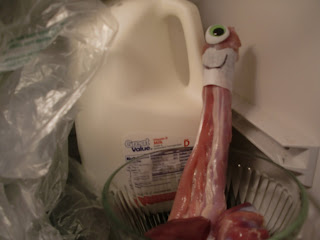 We bought 4 frozen turkeys a few months back because it was a "good deal." We decided to free up space in our deep freeze and cook a turkey for Sunday tomorrow. Tiff LOVES raw meat and often talks about how it feels between her fingers, how the blood captivates her affinity for handling the boney, cold mass.
We argued about who was going to prepare the turkey today, since she wanted to do it so bad. She wrestled and fought at the thought of sharing this event, until she reluctantly gave me the task, due to her unselfish nature.
I got out the turkey, stripped it from the wrapping. I began investigating options to locate the randomly packaged accessories "replaced" back in the turkey. She clung behind my shoulders in amazement, eager to pounce in on the action and participate. I assured her that I could handle it and thanked her for sharing the experience with me. Brown, thick juice spewed and squirted from the butt of the turkey. After clapping w/ joy, she gagged playfully- pretending to be disgusted at the surprise. I smiled enjoying her sense of humor and reminded her that it was a gravy packet; to which she beamed with delight, licking her lips at the thought. I proceeded to reach in to discover what magic may still remain from within the beast.
To my surprise and wonder I slowly pulled a "LONG healthy, boney neck" out of the turkey and displayed my successful find for Tiffany's approval. After a round of high fives and a nod of encouragement from Tiff, she sighed wishing perhaps that she had initially volunteered for the task. After all, she could have been basking in the glory of discovering "the LONG neck" herself. I continued.
Tiff enjoys events like these more than anyone could know. This turkey neck along with the collection of other accessories, pleased Tiff so much that I decided to surprise her with this display in the fridge for Sunday morning. I added a touch of personality- something like what happened to Frosty the Snowman before he came to life. Though such a dream may not come true for her, I hope it will still inspire as much love and happiness. I will be at early Sunday meetings and Tiff will be getting the kids breakfast around 8am. This will be a pleasant find indeed.
She doesn't know about this great surprise yet, but I hope she finds it to be a token of my love for her.
Hope you have a great day Tiff,
Posted by Marshall at 11:53 PM

I am going to have nightmares about that chicken neck, liver, and heart. I seriously felt nauseated every time I looked at it. GAG.

You are to funny Marshall! Hope the dinner was fabulous.

That is just soo nasty on soo many levels. Now you need to go and watch foodinc. and get even more grossed out

haha that's hilarious. You are always full of surprises marshy.

LOL. YUCK! That sounds like something Devin would write. :o)

Bwahahha.. thanks for the visual! now that is funny stuff!