This year we headed up to Idaho for almost a week. Monday, I had to do my trade at the Legacy Center in the daycare. About halfway through, the boys started feeling sick and had diarrhea, so I took them home. Chan started puking when we got home, so I disinfected over and over because I didn't want to get it. We were supposed to head up early afternoon but I wanted to wait until the boys were feeling better. Later that afternoon, it seemed like everything was ok so we headed up.
We stayed with my parents that night. Tuesday night we went over to Marshall's parent's house for dinner and games. I started feeling uneasy and just horrible. We went back to stay at my parent's and all heck broke loose. I spent most of the night on the toilet with a bucket in hand. Marshall followed the next day. That was just the start of being sick and it seemed almost everyone got it, except my dad, sister in law and a few nieces. My sister's kids got it, my brother and his new wife, my mom, and so on. Yuck. I think the end count was 16, and I'm surprised I'm not kicked out of the family yet. ;)
Besides being sick, we still managed to eat an obscene amount of food, spend time with my family as well as Marshall's, tried to sled outside on what tiny bit of snow there was, and just enjoyed each other's company. We jumped back and forth from my parent's house to Marshall's parent's house. I realized I didn't get a lot of pictures of present opening at Marshall's parents, but everyone was opening at once so it was over quick!
We didn't spend a lot on Christmas this year due to the fact that we've barely been scraping by. All in all I think we spent around $40, but still managed to do quite a bit thanks to my review site and various Visa and Walmart gift cards I had won over the last few months. Huge Blessing. The boys were so fun to watch and were both so excited about everything they got. Now it's time for a massive amount of pictures! :) 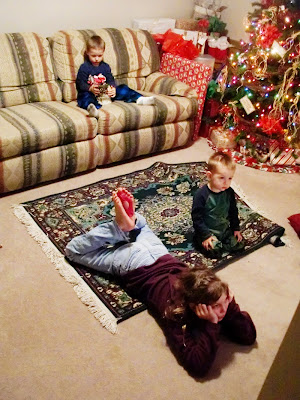 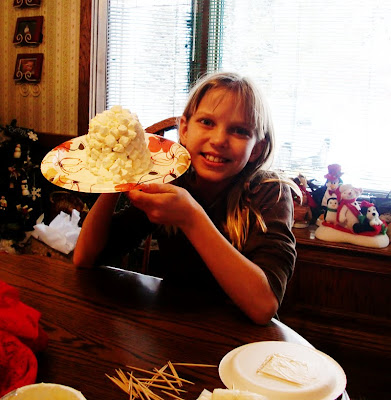 On Wednesday, we went with my mom and nieces to see Planet 51. It was cute and the boys were really good. Afterwards we went to see Santa at the mall. Chandler was thrilled, Rowan wouldn't go anywhere near him. 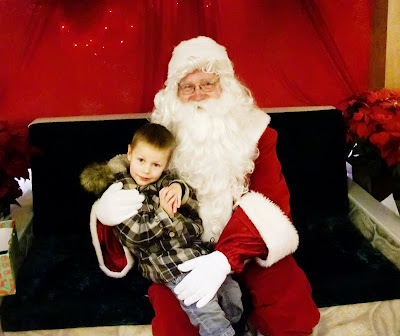 The snowmobiles were out, but there wasn't enough snow, so Marshall pulled the kids on a sled with my parent's Razr. 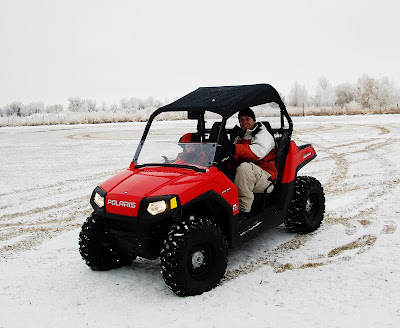 Chandler going for a ride. 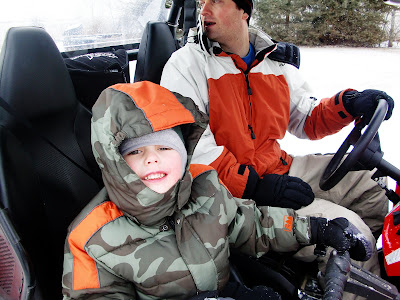 I think this was Savanna on the sled. 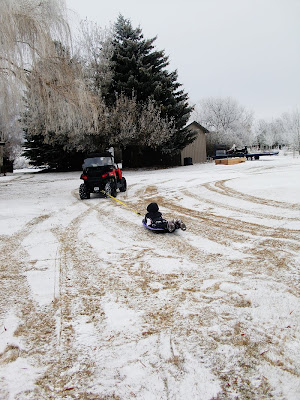 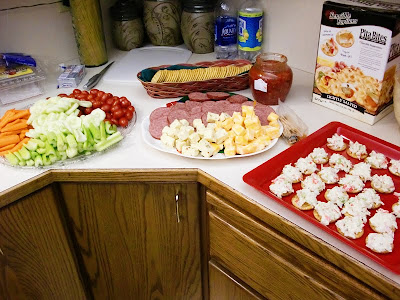 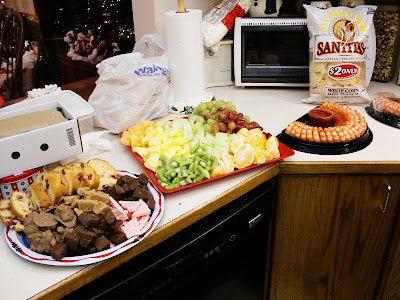 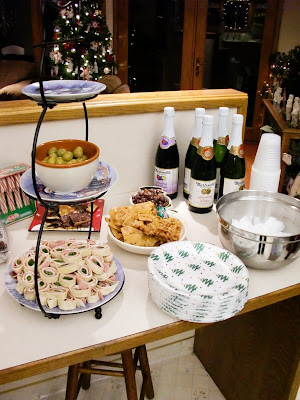 Rowan is like a chipmunk and stores food. He walked around with this orange in his mouth for a long time. He also stored fudge, candy and other treats in his cheek for long periods of time. Funny kid. 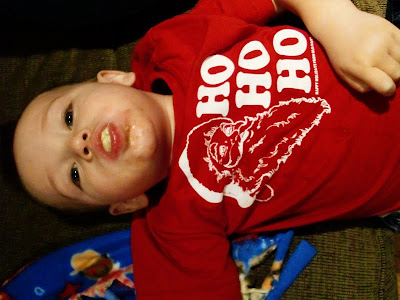 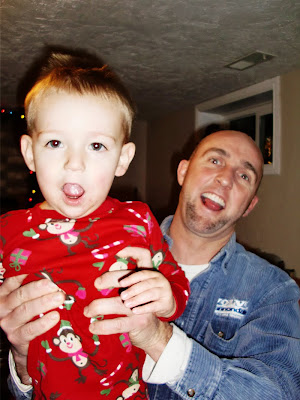 If you have ever held Rowan, you know he has a serious hair fetish. It doesn't matter how long or short, he has to play with it. This started at about 6 months and he's been doing it ever since. My dad is the victim in this picture. 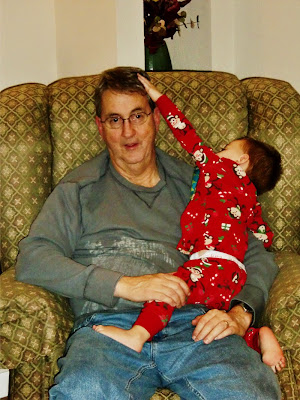 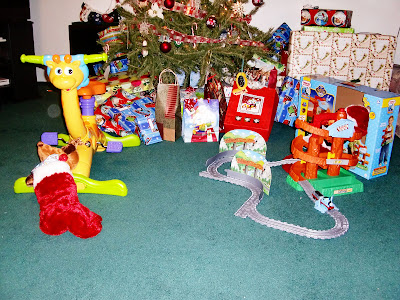 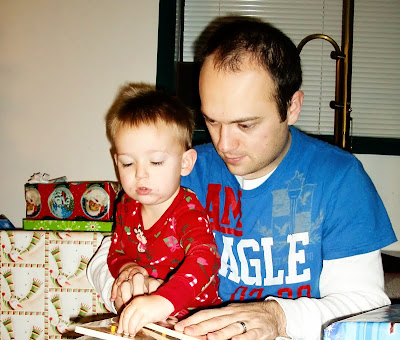 My dad, Nadia, and Row 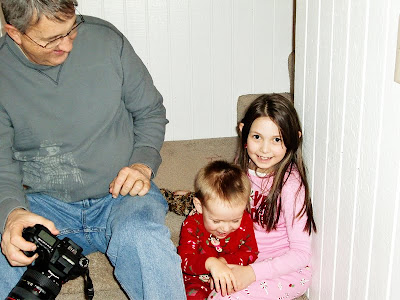 Chandler checking out his stocking from Santa 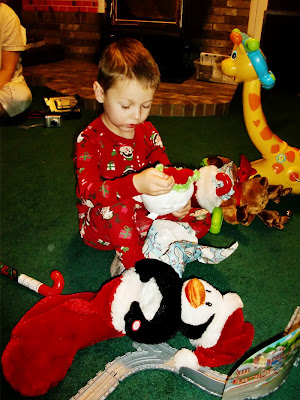 My brother Clint and his daughter Nadia. 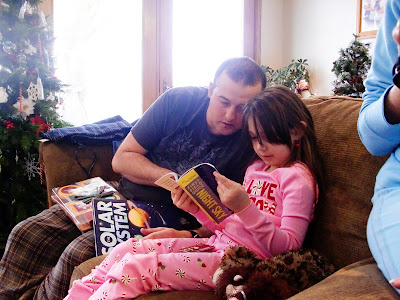 Presents at my parents house before we opened them 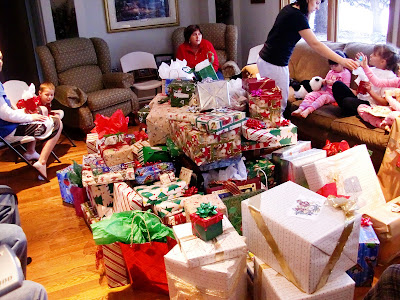 Chandler playing with the play mat and cars Aunt Jeralee's family gave him. 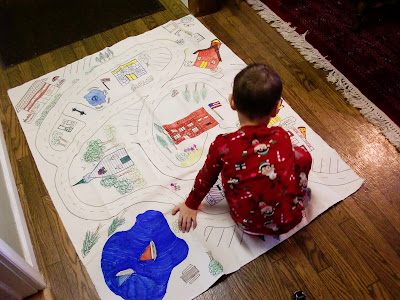 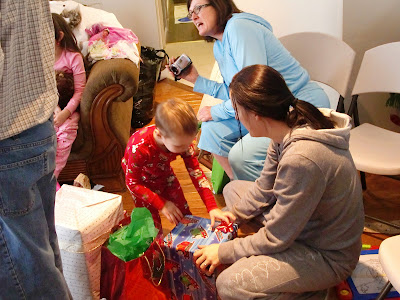 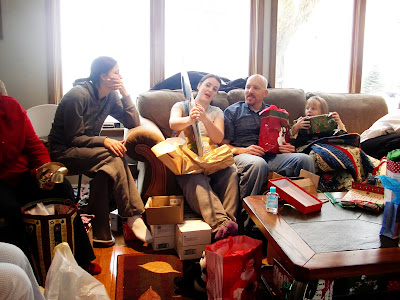 Me with cousins Lisa & Brook 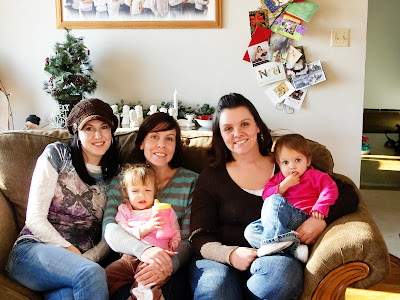 Lia, Avry, Me, Lisa, Brook (And their little girls Sydnee and Elena) 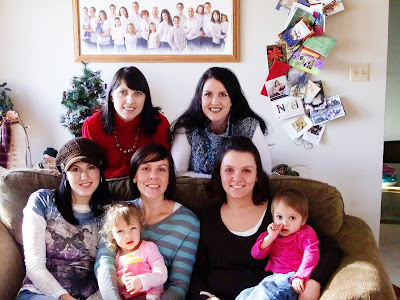 Posted by tiff snedaker at 3:41 PM

I'm so sorry you were sick! That's happened in our family too, and once one person gets it, it's like the entire family has to. But looks like a fun Christmas time anyway!

Sorry about the sickies =( Hope you're all 110% now!! Paxton got that same Thomas playset =)

Looks like you had a great Christmas without spending much...that's how it should be! Sorry we didn't get to spend very much time with you guys. I want to plan some kind of trip down so we can hang out and go to the outlets. Maybe in February?

Love the pictures. Fun to see Clint and his daughter. I haven't seen her in forever! It is good you didn't get kick out of the family. That is serious! Your spread was very fancy! Nice!

Im sorry you guys got so sick. That is not fun at all. At least you still got to eat tons of food though! :D