Happy Birthday Marshall (on the 7th)

Marsh turned 27 on the 7th. I started him out with breakfast in bed. I braved making crepes with fresh strawberries and blueberries and they turned out quite delicious. 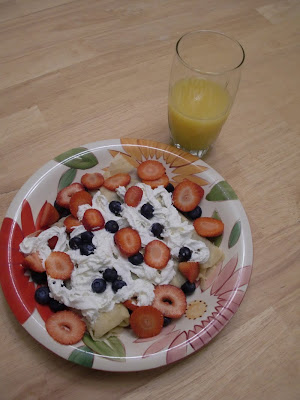 He got a new basketball game for the Wii and we had chocolate chip cookie dough ice cream cake later that afternoon. Rowan was dying to blow out the candles and got some good practice as his birthday is later this week. 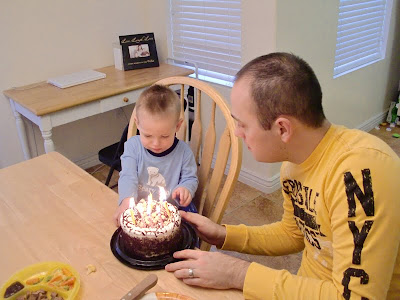 I had to work that night so we had gone out to lunch the day before and had plans to go see Avatar on Saturday.
Saturday we ventured down to Avry's as she said she would watch the boys. We went to see Avatar in 3D and it was sold out. I was really disappointed because I hear it is so good. Instead we went to Old Navy and to Jamba to get smoothies.
Avry made a nice dinner with ribs, funeral potatoes and jello salad so that was fun. It's funny to think he's just a few years away from 30.
Posted by tiff snedaker at 12:27 AM

Happy Birthday Marsh! It was fun seeing you guys. :)