A week before Halloween, my parents were down here. My dad wanted to get Chan a Halloween costume so we ventured to Walmart where there was NO selection. Chandler finally found a witch hat and decided that he wanted to be a witch. (Yes, I know witches are technically girls so we will call him a warlock.) We found him a nose and all. So on Halloween, we got him all dressed up and took some pictures. It was funny, but short lived. 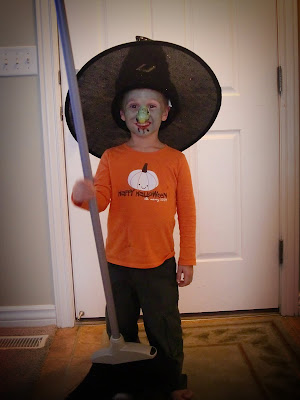 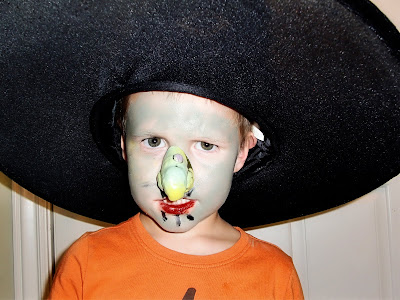 He decided he didn't want to be a witch after all. He ended up wearing his dragon costume from the previous two years to go trick or treating in, and Rowan wore the lion costume that he wore last year. I didn't get pictures of the boys in their costumes before trick or treating, oh well. This was the first year that we've actually gone trick or treating. Rowan lasted all of 5 or 6 houses, but Chandler was all about it. He got into a rhythm and loved it. Because we live amongst townhomes, we got hit hard and ran out of candy quickly.
Posted by tiff snedaker at 11:20 AM