I've been slacking on the fun facts, so here they are for June. 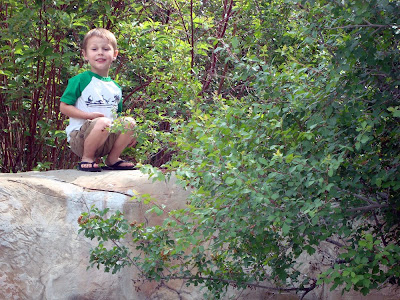 *Loves to play the Wii. He's awesome at navigating and would play all day if we let him.

*Is really good at saying his prayers, and is adding a lot of variety to them.

*He's almost potty trained, but we still have an occasional accident. If only he could be naked all of the time, he'd never have another problem!

*Likes playing outside, and likes the water.

*Weighed 36 lbs when we went to the dr. last week. That's a 4 lb weight gain since he turned 3 last November. No wonder I get tired easily when I'm carrying him.

*Still loves chocolate and now strawberry milk. I've never seen a kid drink so much chocolate milk. (I'm sure he's right up there with his cousin Maeli when she was younger.) He has a glass with every milk and asks for it multiple times during the day. He loves drinking it with a straw. 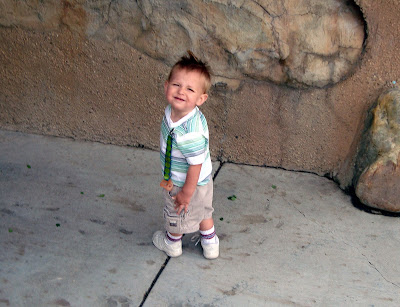 *Weighs right around 23 lbs. He was almost 25 lbs fully clothed at the dr.'s office last week, so I assume he's more like 23.

*You can tell he definitely gets excited about a lot of things, and loves to point at things he is interested in.

*He still has his hair obsession. In fact, I think it's gotten worse. He gets so mad when my hair is in a ponytail that he practically rips it out. So I wear it down most of the time. He also just got his hair buzzed last night and I don't think he's as happy with what he has to play with now.

*Is incredibly attached to his paci, but he sleeps wonderful when he has it. He finally has an awesome sleeping schedule that has been consistent for the last couple months. If we are at home, he goes down between 7 & 8 and sleeps until 8 the next morning. He usually will go down for a nap right after breakfast, and another one in the afternoon. I'm sure he's catching up considering all the crappy sleep he got the first 14 months.

*Goes into nursery next month. I couldn't be more excited!

*He's interested in doing peg puzzles and is getting better at them, and is really into stacking blocks.

*He loves to shut doors and is starting to learn to open them too. The other day, I found the front door wide open and he was playing on the playground. Between him and Chandler, I really need to get another lock for the front door.

you kids are getting so big! They are adorable! Gavin is growing out of his hair fetish, butu has replaced it with a soft blanket (the ones with the silkyness around the edges and soft material in the middle) and willnot sleep without that touching his face. ITs crazy what kids get attached too! How are you doing by the way, no update or fun facts about you for june ;)!