We totally looked forward to filing our taxes this year.  It could be because Marshall didn't really work much the first half of the year, and I was on maternity leave for 3 of those months too.  It could also be because of the first time homebuyers tax credit, or the fact that Rowan was born last year.  All combined, it was nice to get a big return this year.  Some of it went to some not so fun stuff - Chandler's dentist appointment and car repairs.  We did a few fun things though.
#1 - A new camera!! 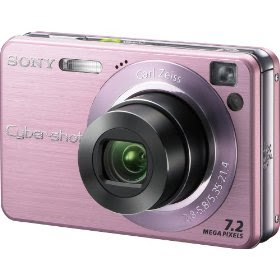 We bought a Sony Cybershot 3 years ago.  I loved the camera.  If you remember, the lcd screen got smashed under my parent's couch.  Then we got a Canon A590.  Although this little camera has great reviews, I didn't love it.  Thought the pictures weren't that great and it felt a little bulky.  Plus it took AA batteries and the batteries would die after about 25 pictures - no matter what kind of batteries.
So I decided on a Sony Cybershot again, the DSC-W120 model.  It came in the mail yesterday, and I am LOVING  it.  I do have to get a new memory card though as the one from my old cybershot doesn't fit.  One of my favorite features is that it has a smile detector.  It waits until the person smiles and then snaps the picture.  SOOOO nice to have with kids.
#2 - New Carseats! 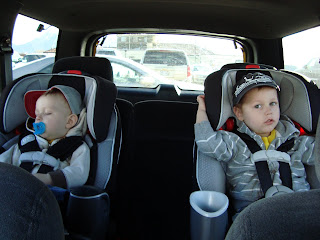 I have had my eye on the Graco Nautilus since it came out last year.  It's a front facing car seat from 20-100 lbs.  The awesome part is that the five point harness works from 20-65 lbs.  Most front facing car seats only have the harness up to 40 lbs.  The car seat then converts to a high back booster, and finally to a backless booster.  These will be the last car seats we have to buy for either of the boys.  We decided to get both the boys the same seat.  They are made with memory foam and seem super comfy.  So far they've worked great!
#3 - The Blazer
We found an awesome deal on a 2001 Chevy Blazer.  It has pretty low miles and was really cheap.  It'll be nice to have 2 cars that will fit all of us, and use the Focus for commuting.  We are going to try to sell our truck since it doesn't really make sense to have it.  All in all, Uncle Sam was pretty good to us this tax season :) 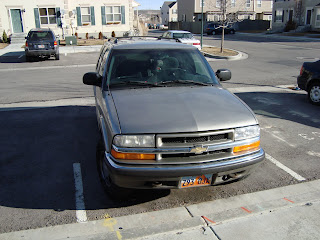 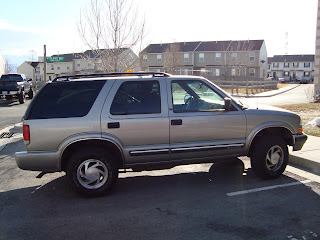 You have the same camera as me! I LOVE my camera - it is easy to use & pretty small too!

The blazer looks nice & so do the boys car seats! Congrats on all the new additions.

Sigh.. I keep thinking I should pay my taxes.. NAH! I will make Uncle Sam wait until April! ;)

How nice! That's great you guys were able to get so many things with your tax $. I love the looks of those car seats and the features. Maybe that's what I should get Jordan!

Love those car seats. Looks like you had fun with your tax return!

That's a lot of stuff! Awesome deals. I have a Sony Cyber Shot and I love it.

Congrats on the new job!! The drive coming home won't be bad because it is so early but getting to work might be a little hectic for you. Your boys are so cute in the car seat picture. I loved when I finally turned Kaden around so I could look back and see him. Now you can look back and see both of your kids.

that is great, tax returns are awesome.

Getting new things is soooooooo much fun. Congratulations on the nice tax return. The boys look cute in their new car seats. Its nice to have all the windows in your blazer also.

Geesh, maybe I should have a second child! We have the same car seat and absolutely love it! Very durable and versatile. Hope you're doing well! We were talking about you at work the other day....the lab....the phone call...the rhogham work up..... Miss you!

You guys are so lucky! I have to give all my money to that stinkin' IRS, and you get to buy presents? ;-) The camera, seats and blazer all look great. Hooray for you!

I used to have the sony cybershot too and loved it. My camera now is HUGE but its not an actual "digital camera", it a professional photography camera, so that is why.

I miss my dainty cybershot sometimes though.

LOVE the blazer and the carseats. :o)