*Can't get enough of the Wii and wants to play it all the time.  This boy loves video games in general.
*Has started taking naps again here and there...yay!
*Is getting really picky about food.  Getting him to eat is a constant struggle.  He does like hard boiled eggs a lot right now.  Oh and chocolate milk.  I think chocolate milk is a staple.
*Favorite movie right now is Bolt.
*Has picked up on our nicknames for Rowan.  We call him Bubba and Rowan Bagowan.  Chandler has started calling him Bubba and Bagowan.  In fact, the other day when he heard Rowan wake up from his nap he said:  "Mama - Bubba's awake."
*Thinks there is a monster under his bed and gets pretty scared sometimes.  We asked him what kind of monster and he said: "The BIGGEST Polar Bear ever is under there!"  I think he's starting to believe us that there is nothing under his bed.
*Is constantly asking to go play outside.  Maybe if the weather would just cooperate and the snow would go away, we could play outside more.
*Peed in the potty for the very 1st time a few weeks ago!  Hopefully this will spark more interest.
*Loves to do puzzle books.
Rowan 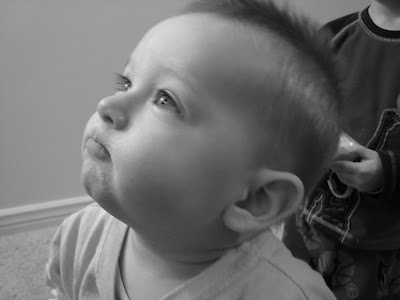 *Does this cute little thing with his lips, I finally caught it from the side in the picture above.
*Has been sick on and off again all month.  Just when I think it will end....it doesn't.
*Is becoming even more obsessed with my hair.  As soon as his paci goes in his mouth, he reaches for my hair.  If I'm not holding him, he reaches for his own. He's mastered putting his own paci in, it just isn't always right side up :) 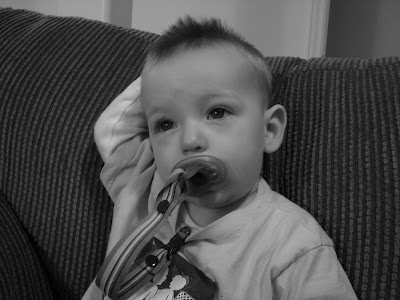 *Loves to shut drawers, cabinets, and drawers.
*He is a monster eater when he is feeling good.  For example, one day last week at breakfast he had a yogurt, 3 eggs, a bunch of grapes and half a sippy of chocolate milk.  I don't know where it goes.  Then I will put him down and he will see if there is any food on the floor to eat?  He also can reach up to the edge of the table and will pull food and drinks off.  Marshall started keeping a sippy on the edge of the table so Rowan can get it when he is thirsty.
*Is really intrigued by animals.  We went to the farm at Thanksgiving Point this last week and he couldn't get enough of the animals.  He was mesmerized.
*His hair grows in a funny pattern.  The top sticks straight up and the back gets long quickly.  On the sides it doesn't really grow and isn't that thick.  Looks a bit like a mullet sometimes. :)
*Goes down for naps and to bed really easily.  You can just lay him down and he'll go to sleep.
Posted by tiff snedaker at 9:31 PM

LOL! We're right there with you on the BOLT bandwagon. We watch it a couple times a day while I lay here in boredom. :o)

They are growing up sooo fast!

Yeah for going on the potty! THey look so big. Claire is doing the whole scared of monsters in her room too. Funny.

I can't believe how much Rowan has changed since I saw him last. It will have been a year by the next time I see you guys.

The biggest polar bear. That kills me.

And I am with Rowan, I am always running my fingers through my hair. It is kind of fun when kids do it, if they can do it without pulling on it!

And here is your reminder to give your little munchkin his Singulair. :-)