Yesterday seemed like a whirlwind. We were going nonstop. We had a scavenger picture hunt to do for Marsh's Christmas party. I was really excited about doing it because the prizes were really good. As in: 2 days vacation for Marsh, a digital camera, a Wii, golf passes, and a year membership to a gym. This was no ordinary scavenger hunt. We had a list of items, places, people, etc that had different point values. We had to take pictures with as many points as we could and submit the best three. We ran all around trying to find different stuff for the pictures. I was running like a mad woman around Walmart and we were fighting crowds at the Dollar Store to try to get items for this hunt. (Much like chickens with their heads cut off.) Our apartment was a disaster when we left as our the pictures with the most items we took at home. Then it was time to get going and head to Salt Lake to check into our hotel. We were running an hour later than we wanted to, and the 2nd picture we took at a park in Salt Lake didn't end up turning out. Our third picture we took just minutes before we had to be down to dinner for the party. Marsh and I both felt a little bummed, like we probably wouldn't win anything since we were only submitting 2 pictures, and we'd worked so hard to try to get them to work, and spent so much time. Crazy stress just for a scavenger picture hunt!
The hotel was incredibly nice. His company paid for everything while we were there which was cool. We even got valet parking when we arrived! 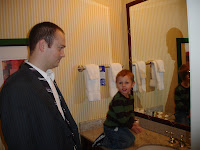 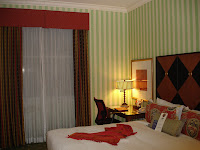 Probably the nicest one I've ever stayed at, very mod. Here is Marshall & I just before we went down for dinner. 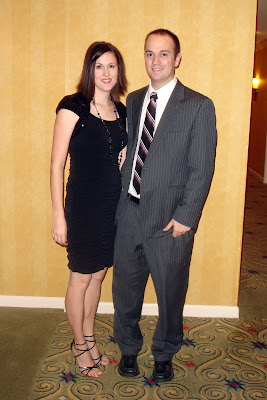 Dinner was great! We had crab cakes as appetizers, salads, yummy steak and potatoes for the entree, and some sort of cherry chocolate brownie mousse cake for dessert. Not to mention there was a huge table with sushi, fresh fruits and vegetables, shrimp, chocolate covered strawberries and more. The food was soooo good. After we'd been there a couple hours, they did the photo scavenger hunt prizes. It was hilarious seeing some of the pictures people took. And after it was all said and done, we ended up with 2nd place! Whoa! Our pictures were that good and Marsh and I were beyond excited. The lady who won first prize ended up taking the vacation days so we are the new proud owners of a Wii!!! It's the sports edition and we have yet to play it but we are SO super excited. They had a dance after that and it was so much fun too. It reminded me a little of my high school days when I loved and went crazy at high school dances. Marshall has some pretty sweet moves too, he's been holding out on me. We finally went up to our room at 11, since Avry & Maeli were up there with the boys. (Thank you thank you again Avry!!)
This morning we had vouchers for breakfast at the nice restaurant in the lobby. Then we headed home. I can't help but feel we are very blessed for the company Marshall is working with. He is treated really well, there is tons of room for growth, bonuses, and leadership opportunities, and he has some great co-workers.
Oh, and in case you were wondering, here are the 2 pictures we submitted for the photo scavenger hunt.....(totally random, I know.) 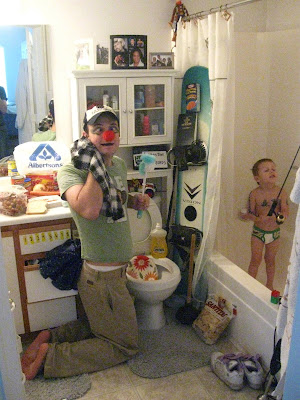 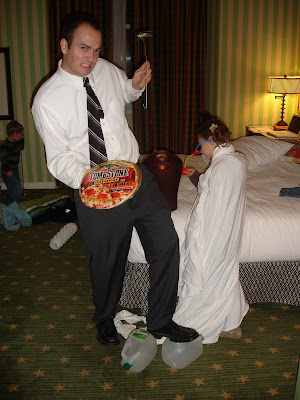 Looks and sounds like you guys had a blast! I'm so glad it was fun even though the day was hectic. I'm so jealous you have a Wii! Those things are so much fun.

You look amazing! That sounds like it was a lot of fun! What hotel did you guys stay at? It looks super nice...

so fun!! your dress and outfit are gorgeous!! what a steal! sweet to also get a wii, what a nice early christmas gift!! I love the random picture, especially that you have stars in frames above the toilet!! haha

When do we get to play the Wii?? Sounds like an awesome party, and your dress looks great.

Weird pictures...LOVE the dress and shoes and LEGS! :)

That looked like it was so fun to do...I'm sure Chandler figures he has the nuttiest parents around!

Hey, I need your address. E-mail it to me milner_time@hotmail.com

Laughing hysterically at the picture of Marshall w/Chandler.. I about died when I saw all the tattoos on Chandler! It was fun watching the boys & you guys looked great! Whoo hoo on the Wii! YAY!

What a great prize! It sounds like a totally fun evening! The pictures are pretty funny.

Sounds like quite the party!! I love the dress, you look beautiful!! And a dance?!? That sounds like tons and tons of fun!!

Tiff, you look SO good! I am super duper jealous of your little black dress and your hot shoes, you saucy little tart! :) I'm glad you had such a great time.

Sounds like fun! You guys look so cute all dressed up! You are such a cute couple.

Sounds like a blast. Those pics are so funny, I see why you won! I love the dress too! Enjoy your Wii, we love ours!

I'm with Melody, you are one AMAZING looking mother of two!!!

Good job Jason! That's exactly the hotel it was :)

Looks like a great time. ONe you will remember. Glad you were so fortunate

you look great! we love our wii, we just got mario cart and play it all the time! have fun

What in the world? You might have to explain that first picture, because WOW. Sounds like you had a blast, and you look amazing!

Hey Tiffany! Thanks again for letting me buy those blocks from you. I really appreciate it. I've been looking online for that cute basketball toy you have but with no luck. If you happen to see it anywhere will you let me know!? I'd like to get one for Jordan. Thanks.