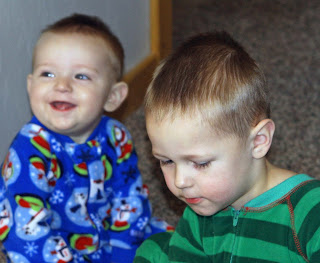 Wow, the last week has been fun and it sure has been nice visiting family in Idaho. We closed on our house Tuesday afternoon and headed out to Idaho around 5. Luckily the roads were good and we made great time. We got to Marshall's parents around 10 pm. The next day I made sure to get a workout in as I knew how bad I was going to be with my eating the next few days. Marshall and I also made a trip into Walmart to pick up a few last minute things. We thought it would be crazy, but it really wasn't that bad. The rest of Christmas eve we spent with Marsh's family. We ate lots of great food, had wonderful company, played their Christmas chimes and read the Christmas story. Before bed, the boys opened their Christmas pajamas and they looked so cute. One of my favorite things about having two boys so close in age is having them match :) I don't think Rowan was too pleased with the choke hold that Chandler had on him. 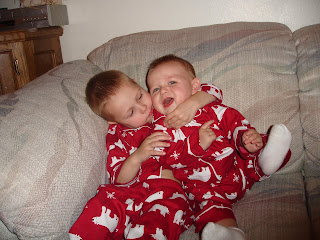 Santa was hard at work after the kids went to bed. We all got up at around 7:30 the next morning. Chandler got Squakers McCaw, the talking parrot and a few more tracks and trains for his Thomas set.
The bird was a big hit with everyone and Chandler loves to tote him around and hear him talk. They have quite the conversations. Rowan got a Leapfrog learning table and it's perfect for him. He loves to stand and is walking all over the place now....where did my baby go? 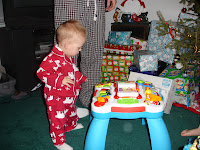 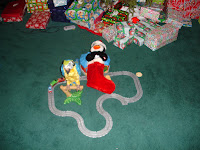 It's funny how you get so excited for your kids on Christmas and could care less what you get. I was pretty excited to open a new lap swimsuit from Marshall along with a new pair of goggles. I've been dying for some variation in my workouts, and it'll be nice to be able to swim laps now too.
We had the most delicious Christmas dinner and Marsh's mom did a great job with the food. I was more than stuffed when it was all said and done. Christmas afternoon we were supposed to head up to Island Park with my family. They had rented a cabin for the whole family. The weather was pretty crazy and has been for the past few days. It was snowing so hard they decided to wait a while. Marshall also had to go back home as he had to work on Friday and there was no way he could get out of it. I was a little nervous as the weather seemed to be turning worse. The boys and I headed up with my parents and two brothers around 5 or so. By the time we finally made it up to Island Park, we couldn't find the cabin. My mom finally thought she saw something and waded through snow that was thigh high. She found the cabin and nothing had been plowed out. We spent the next couple hours hauling in presents, food, and everything else in snow that was 2 1/2 feet deep. The snowmobiles were getting stuck, we all were freezing, and I couldn't believe it as the snow continued to fall. I kept calling Marshall and although he was driving in snow, with wind and drifting, he managed to make it home safely. 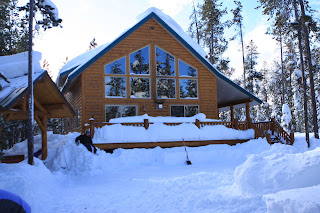 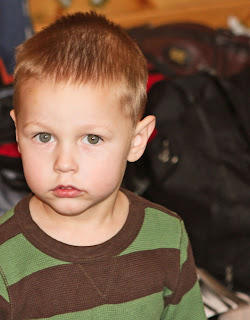 Friday I went out on the snowmobiles with my dad and two brothers. I like to snowmobile but I hadn't dressed as warm as I should have and a 2 hour ride turned into 5. I managed to tip my machine in some pretty deep powder and was exhausted by the time we got back. Chandler loved the snow and was in heaven as Uncle Jason pulled him around on the sled, built him a snow cave, and built a little hill for him to sled down.
Marshall made it up safely to the cabin on Friday night and we finally had "Christmas" with all of my family that was there.
Saturday was filled with tons of food, (of course), more snowmobiling, playing in the snow, watching home videos, sitting in the hot tub, and playing games. Chandler officially had a great Christmas and was exhausted. Saturday night he went to bed at 5:45 pm and slept until 8:30 am the next morning. We had such a great time and were so happy to be able to spend Christmas time with our families. (My dad took most of the pictures on here at the cabin. He's got a great camera and took some wonderful shots.)

And the fun doesn't end here. We are moving tomorrow. I hope it doesn't snow too much and that everything goes smoothly. Not sure when we will have the internet hooked up at our new place, but if I have anything to do with it, it won't take long ;)
Posted by tiff snedaker at 8:42 PM

I can't believe Marshall braved the weather and did all that driving! We didn't go up to Idaho because we didn't want to drive on those roads. Let us know if you need any help moving.

Looks like you had a fun Christmas! Good luck with the move! Can't wait to see pictures of your 1st home!

That looks like the cabin my family stayed at in Island park years ago, fun times. That sure is a lot of snow. Congrats on the house!

It was good times! man I might steal some of these pics for my blog! What fun times we had. :) It was a great Christmas!

the cabin looks gorgeous! Sorry about the weather.. Looks like it was a very nice Christmas. I'm sitting here looking at your pictures and feeling sad we weren't there.

Happy Holidays Tiff!! Good luck with the move. When I was reading your blog and you said that you went up to a cabin in Island Park, I thought to myself...I hope they found it because it probably wasn't blown out. Then I read on and it wasn't. Glad that you found it and you had fun with your family!!