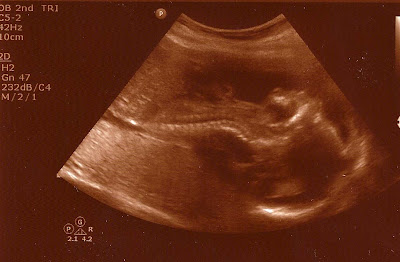 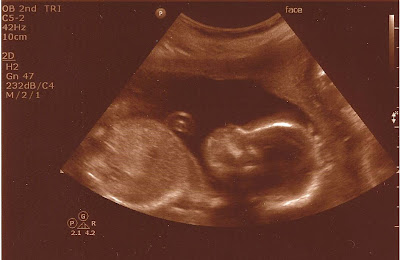 BOY!!!
We are so excited to be having another boy! I really thought it was going to be a girl because this pregnancy has been so much different. I was pretty sick until about 17 weeks and still feel nauseated at times. Marshall & Chandler came to the ultrasound. A few minutes into it, I was feeling anxious and wanted to know whether it was a girl or boy. The u/s tech got a great crotch shot and I said, "Now that's a boy!" She laughed and said she was going to ask us if we wanted to know, but we figured it out on our own. We saw his little boy parts a few different times, and there's no mistaking that. It will be great for Chandler to have a little brother to wrestle with and be buddies with. Baby was measuring at 19 weeks, so right on. I'm taking that as a good sign as Chandler measured a week big at his 20 week ultrasound. I'm trying for a VBAC (Vaginal Birth After Cesarean) as it was a hard recovery from a c-section. I think that will happen as long as I have a smaller baby. Chan was just too big for me (9 lbs 1 oz & 22 inches long) so I failed to progress. I think it didn't help that I gained 55 lbs, oops! I've only put on 5 lbs so far this time but I packed on the weight in the 3rd trimester with Chandler, so I assume this little guy will be the same
This baby is really active too and I'm feeling a lot of strong movement as the placenta is posterier this time. It was anterior with Chan and I didn't feel this strong of kicking going on at this time.
Now to play the name game. I think boy names are a lot harder than girl names. Marsh and I just have to agree on something, lol. I want something unique, but not weird. I also don't want him to have 5 other kids in his class with the same name growing up. Anyways, there you have it! We're almost halfway done and now we get to look forward to getting REALLY big, having more indigestion and waddling around :)
Posted by tiff snedaker at 3:21 PM

HOORAY!!! I am so happy for you, you are going to LOVE having two boys! Thanks for sharing the good news!

Congratulations!!! What an exciting day!

Congratulations, that is so exciting. I think it is best to have two of the same gender first so they can be little buddies. (not that brother and sister can't be buddies) but you do already have boy clothes. So congrats, happy baby carrying.

congratulation!! I am so excited for you. it's nice that it will help with the boy ratio in the family.. lol
again, i'm happy for you. I wished for a boy but after having my sweet little bianca i was happy.. plus you will probably have more kids right?
again congrats.. and hope the next months go by fast, for you at least!

Congrats! That is great news! At least you wont have to go spend a lot of money buying new decorations and clothing.

Good stuff. Good luck on the baby naming. At least you have plenty of time to come up with one.

CONGRATS! I would've guessed a boy for you because anyone pregnant with their second that I know is having the same as the first. Including me. I agree about boy names being harder and also about thinking it was a girl due to differences in the pregnancy. I was so sick this time - thought for sure it was a girl. Turned out I had to get my gallbladder removed - HAHA! That's ok, when I got it out I lost 10 lbs, since it was the 1st trimester, perhaps I won't gain as much this time either. (I can only hope) Good luck with the name and keep us posted. We are going with Eli.

Oh, and I cannot believe Chan was so big. You are tiny, that should be illegal. Dean was only 6 lbs 9oz (THANK GOODNESS)!