About a week ago, I noticed that one of Rowan's bottom teeth was sticking out more and wondered if it was loose.  Sure enough it was and he was excited at the fact that he had a loose tooth.  He started wiggling it a bunch but didn't want me to pull it out.  The next day, he had a playdate at his friend Carson's house.  Carson is in his small group kingergarten class and in our ward.  He's a great friend.  I went to pick Rowan up and he was crying.  I guess he had bitten into an apple and was bleeding.  His tooth was a lot more loose now but he still didn't want to pull it out.

The next morning, he got up and was quite distraught.  He asked why the tooth fairy hadn't come and I thought he lost his tooth during the night.  His tooth was still there and I told him it had to come out of his mouth before the tooth fairy could come.  2 days ago while he was eating breakfast, I heard him laugh and yell.  I looked over to see his tiny little tooth that he had pulled out.  He was so so excited.  We put it in a little baggie but took a picture before he headed off to school.  The tooth fairy came that night and brought him a dollar which he was so excited about.  He's got another loose tooth on the bottom and I think it will only be a matter of time.  He's already got a permanent tooth coming through where he lost his tooth.  Although he's 5 1/2, he was my baby for a LONG time. It's hard to see him hitting milestones like this because they look so different when they start losing teeth.  My baby is growing up! 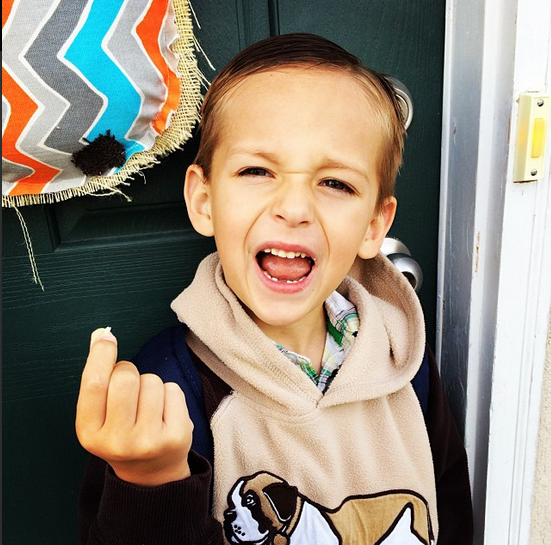 Wow!! That's crazy he's big enough to be losing teeth. Jordan STILL hasn't lost a tooth and he's in 2nd grade. That's cute he thought the tooth fairy would come BEFORE his tooth was out! :)

Can you believe our babies are old enough to be losing teeth? Weren't we just preggo with them? Jonas just lost his second tooth last week and its a little sad, yet exciting to see them grow up.