I'm so excited to have a day to celebrate Fathers.  My own dad is the most amazing man you will ever meet.  He's always been there for me, and I know he always will be.

Marshall is also a wonderful Father.  I'm going to brag on him for a minute because I don't get to do enough of it. :)  He's incredibly hands on with our boys, plays a lot with them, does so much for me, and treats me like a princess.  We put together a goody basket for him with his favorite treats this morning.  Then I made him breakfast before we headed to church.  When we came home from church, I had to head off for work, but not before I finished making lunch for him that included chicken that was already in the slow cooker.  As I was setting the table, Marsh was sitting there and had just finished cutting up watermelon.  In my hurry to get everything ready quickly, I spilled an entire glass of water and ice everywhere.  Marsh knows that it's getting hard for me to bend and such.  Before I could even turn around to go get paper towels, he had a handful of paper towels and was on the floor cleaning up the mess that I had made.  It may not seem like a big feat, but I wanted to cry at how he didn't even blink an eye to help me.  I could have cleaned up the mess by myself, it would have taken less than a minute, but  I didn't have to.  He's like this all of the time.  Always puts others before himself and does a lot around the house.


I also admire the type of person that he is at his job.  When I go to my job, I clock in, I clock out.  I don't bring my work home and some days, it's all I can do to function or make it through.  Marshall on the other hand is always looking for ways to be actively involved or improve his company.  He thinks outside the box and always goes above and beyond.  He recently had a marketing event that he had been pushing for to get new leads for his team.  It wasn't necessarily traditionally how things are normally done in his company, but Marsh pushed it forward because he'd done enough research and developed relationships that he just knew it would work.  The event ended up being a huge success and his boss was incredibly surprised at the outcome.  He managed to get twice as many leads at this conference than they've gotten in the last 6 months.  I'm definitely not surprised, he's really amazing at what he does.


I love Marshall's testimony and his knowledge of the gospel.  If you were to ask him it, he would be modest and say there's things that he needs to work on.  I think we all feel that way, but he's a spiritual giant.  I lean on his testimony and knowledge a lot and I don't know if he realizes it.


I just love him.  SO much.  (Did I mention he's super hot and I get butterflies when he walks in the room or looks me in the eye?)  He might not realize that he still does that for me, but he does.  :)  Happy Father's Day Marshall!!! 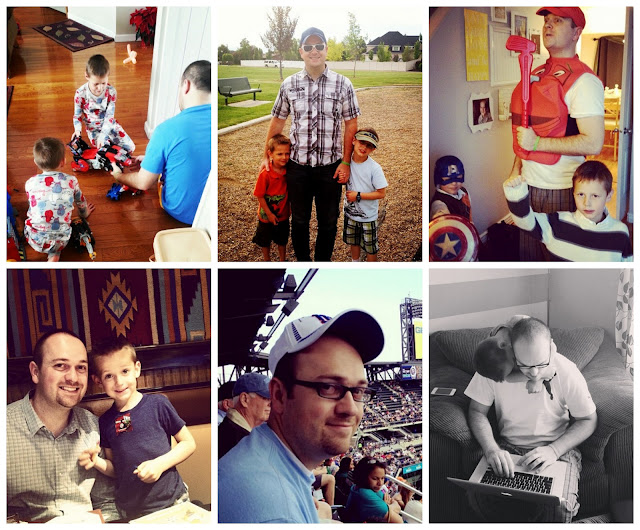 Such a cute post about Marshall! He sounds like such a great daddy and husband. Hope he had a fabulous Fathers Day!

I just love that guy!