Well and not so Well Child Visit

Thursday we went into our pediatrician for well child checkups and also for a follow up on an ER visit we had for Rowan. We were in the ER last Sunday as Rowan was having difficulty breathing. For the most part, we can usually control things at home with Rowan's nebulizer, but this particular day he was having a hard time even after the treatments. He'd also been fevering around 102-103 for the past day. They diagnosed him with bronchiolitis, and a right ear infection.
So when we went in for our follow up, we told our pediatrician about our ER visit. He did a checkup on both of the boys, and Chandler got 3 shots.
Here were their stats:
Chandler: 37 lbs, 41 inches
Rowan: 24 lbs 10 oz, 35 1/2 inches
They both seem to be growing well and Chandler loved the appointment, until he got his shots. At one time, our ped came back in and with tears in his eyes Chandler said,
"Did you poke me? Did you?!"
It was not so funny to him, but Marsh & I had a good chuckle about it.
Our ped listened to Rowan and said that he was incredibly wheezy. He also asked if at our ER visit they had tested for rsv. They hadn't, so he did a test in the office, which came back positive. After 3 breathing treatments, our ped came back in to the room to check Rowan's breathing and oxygen. Rowan was asleep, and was sating at 78-79% on room air. I didn't know before this visit, but I guess that's pretty bad. Normal oxygen levels are 95-97% and if you are under 90%, you really need help breathing. I don't think the fact that he is and has been an asthmatic for over a year really helps. Wheezing is a part of life for him. :( They put him on oxygen and he managed to go up a bit, but was still retracting and struggling to breathe. Our ped decided that he needed to be admitted somewhere. He also said we couldn't transport Rowan ourselves because he could stop breathing en route if we couldn't monitor his oxygen and if he wasn't on supplemental oxygen. So we were ambulanced up to Primary Children's in Salt Lake. As they were loading Row into the ambulance, Chan and Marsh were walking out. Chan refers to Rowan as, "My best friend" so he was beside himself to see someone taking his brother away. It was my first ambulance ride, and of course Rowan's as well. Rowan was really subdued the whole time and I got terribly car sick, bleh. Once Marsh had dropped off Chan at Jeff & Sara's, he headed up to meet me in the ER. 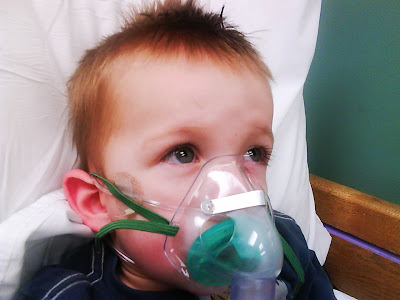 After taking him on and off oxygen for 5 1/2 hours, breathing treatments, and deep suctioning, he still couldn't keep his oxygen up on his own, so we were admitted to the RTU for further monitoring.
There he received breathing treatments every 2 hours and was deep suctioned every 4 hours. This one was hard for me. Having to hold his little arms down and watching him cry and shake uncontrollably while they stuck the tube down his nose and into his throat made my heart hurt. But his saturation levels always came up quite a bit after they suctioned him. I must have stared at his monitor half the time we were there. Every time that the monitor started beeping when his oxygen went below 90, I would start to feel sick as I watched his numbers drop. There was usually a nurse in the room within 20 seconds hooking him back up to oxygen though. After 12 hours of monitoring, they decided to actually admit him. I can't believe how Row would just lay there for hours on end, and be ok with it. 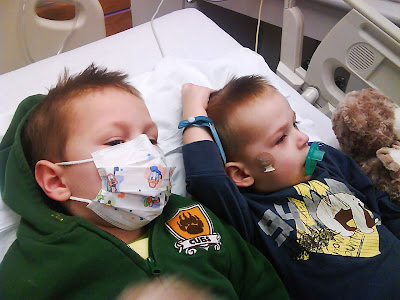 Saturday morning they took him off oxygen at 2 am to see how he would do. He started to hold around 90-91%, and stayed there for 7 hours. When the dr. came in in the morning, she said we could go home. Wahoo! Although I was a bit scared to bring him home because we couldn't monitor him, I felt like we knew enough that we could help him at home. Rowan usually uses a nebulizer when he starts wheezing, but they sent us home with an inhaler and spacer, which is much more convenient and faster. He's also on steroids, an antibiotic, and his daily singulair. He's doing quite a bit better today and although he still sounds yucky, he's been running around playing and has had a good appetite.
Looking back, the last couple days have been a whirl wind. It's different going from Chandler who has always been so healthy despite the common cold and such, versus Rowan who has had such bad astmatic problems and seems to get sick at the drop of a hat.
I'm also thankful to live in an area that we have such good health care. The last few days were my first experience with Primary Children's Medical Center, and I have to say I was more than impressed. From the level of care, to the simple things like cute blankets, sippy cups, meals catered to kids, toys and movies, and the little tiny pajamas. I also find it ironic that our pediatrician, Dr. Lei, specialized in childhood asthma and he's given us such great care.
I know this is turning into a thankful post, but I am thankful for good friends that would help us at the drop of a hat, and encouraging words and visits from family. My mom dropped everything to come down and help out for a few days. I can't imagine going through things like this without such a great support system.
I sure am happy to see this little guy smiling again. 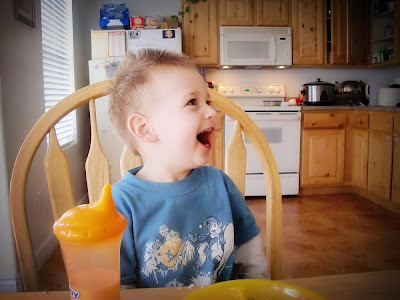 Posted by tiff snedaker at 5:44 PM

Oh my goodness! I'm so sorry your family had to go through that, but I'm so glad Rowan is doing better. I can't imagine how scary that must have been. Prayers sent!

Thanks for such a detailed post Tiff. Always hard to see your child struggle like that. I can only imagine what it was like to stare at that monitor and watch his sat levels.
I love children's hospitals. They always go above and beyond to make it good for the kiddos.
Glad that you had family close enough to come help up and SUPER glad that Rowan is doing a bit better.

Those boys are soo darn cute.

I hope he feels better soon....and you too....I can't even imagine!

Hey girl I am glad he is feeling better! AND HOME! I agree it is great to have such a good support system.

I can't imagine all you had to go through! How scary to know your little guy isn't getting enough oxygen. I would be sick too! I just had another friend that lives in city center have her baby up at Primarys for RSV too. I'm glad to hear he's doing better and your home.

Wow. That poor little guy! We miss you lots, but are also grateful you have close access to such great medical care. I hope he keeps improving!

Oh Yuck! Reading this made me cringe because we just had the RSV whoas blow through out whole household. Poor Rowan! We were lucky not to have any severe breathing problems due to the RSV. I hope he's doing MUCH better. ERs are not fun as it is, but with a toddler? YUCK YUCK!

Sorry to hear things have been so rough for Rowen. I am glad he is doing better now. You may want to look into the book: Healing the New Childhood Epidemics There are some videos on it on youtube as well. See what you think.

Wow, that's so scary! One second you're at a doctor's appt the next you're in an ambulence?! I'd freak out. At least they were able to help him. It reminds me of Gabe's whole NICU experience with watching that monitor and freaking out when it would alarm and nurses come a runnin'! So scary...

So scarry. I'm so glad he is doing better. I think we are all so ready for spring! Winter had just been too long.

I'm glad things are going better. How scary!! Let us know if you need anything.